(Minghui.org) As the 2013 US-China Human Rights Dialogue takes place in Kunming, China on July 30 and 31, Dr. Katrina Lantos Swett, Chairwoman of U.S. Commissions on International Religious Freedom (USCIRF), urges the US government to raise the Falun Gong issue during the meetings. 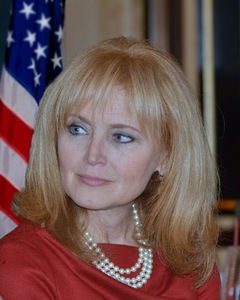 On July 23, Dr. Swett, along with Ms. Mary Ann Glendon, Vice Chairwoman of USCIRF, published an op-ed on CNN. In the article titled “U.S. should press China over Falun Gong,” they made the following specific recommendations:

“President Xi Jinping should be pressed to fulfill his promises to establish the rule of law by abolishing organizations like the 6-10 Office and re-education centers and immediately cease the abhorrent practice of involuntary organ harvesting from Falun Gong and other prisoners, while ceasing to harass lawyers who defend Falun Gong and other sensitive political cases.”

“The United States should press China to allow the free commerce of beliefs and ideas to prevail, starting with Falun Gong practitioners.”

CCP’s Dominance in China Will be History

“The implication of that many people being willing to take a stand, being willing to say ‘we view this as an ideology and a party that is corrupting, we don’t want to have part of it.’ really speaks almost the spiritual real-awakening of the Chinese people, a reconnection to some of the deeper values that they cherish but in some senses lost touch with during the long period of communist rule. The Chinese communist party’s dominance in China will be a thing of the past. Those ancient spiritual values will continue to guide Chinese people and be a great part of their civilization, their history, and their future.”

She also suggests that leaders in Congress should consider applying the Magnitsky Bill to other countries.

The Magnitsky Bill was passed by both the US House and Senate and became public law in December 2012. The bill bars any Russian human rights violators’ entrance to the United States, freezes and prohibits their US property transactions.

USCIRF is a bipartisan U.S. federal government commission dedicated to defending international religious freedom. It makes policy recommendations to the US government and Congress.

“A Matter of Simple Dignity”

In the op-ed, Dr. Swett and Ms. Glendon urge the U.S. Secretary of State John Kerry to raise the Falun Gong issue as a way of upholding the basic dignity of mankind:

“In truth, the problem lies not with the Falun Gong, but with the Chinese government’s fear of dissent and its contempt for basic human rights, including the right to freedom of religion or belief. As a matter of simple dignity, as well as human rights, U.S. Secretary of State John Kerry and other officials should raise the issue of the Falun Gong in the upcoming U.S.-China human rights dialogue in Beijing.”