A good mother and wife, a good daughter-in-law and neighbor, Falun Gong practitioner Ms. Wu Shuyan spent six years in prison for persevering in Truthfulness-Compassion-Forbearance. She passed away on June 2, 2013, at the mere age of 46.

Almost a month has gone by, and she still lives on in the hearts of her family and friends.

Ms. Wu, from Shenyang City, was arrested in May 2006 after she clarified the facts about Falun Gong to some people who lived nearby. She was imprisoned at the Shenyang Detention Center for 8 months before being taken to the Liaoning Provincial Women's Prison, where she was locked in solitary confinement for 3 years and performed 12 hours of slave labor every day.

In June 2012, due to the long term and intensive labor, mental pressure, and being unable to access Dafa books and do the exercises, Ms. Wu developed a difficulty in eating, her abdomen became more and more swollen, and her body became thinner and thinner; she was on the verge of death.

That same month, she was released, but neighborhood committee member Wang Daxing called her every week to harass her. At the of 2012, Wang Daxing brought 7 people to her house to threaten her. At that time, Ms. Wu was not at home, so they threatened her husband: “If you don't do as we tell you, we'll have both of you sent to prison.” 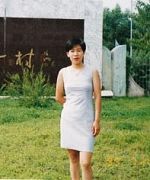 On February 11, 2013, Ms. Wu's symptoms became worse, and she could no longer lie down to sleep. Being only able to sit up at night, she could not fall asleep. Even so, the police never let up in their harassment and threats. Unable to bear it anymore, Ms. Wu passed away on June 2, 2013, amid the brutal persecution from the Chinese Communist Party (CCP).

Ms. Wu was a pretty lady who always had an amicable appearance. She had a big family, and she lived with her parents-in-law. Her daughter is lovely, her husband is honest and trustworthy, and their family is wealthy. Especially after she started practicing Falun Gong in 1996, their whole family benefited.

At that time, Ms. Wu's family of 5 lived in an apartment in Changan Community, Dadong District, Shenyang City. Her family of three lived in the seven square meter north room, and her parents-in-law lived in the twelve square meter south room. Though the size was small, they lived a harmonious and happy life. During the weekends when their relatives came to visit, Ms. Wu was very busy taking care of the meals.

When her mother-in-law became ill and was unable to get out of bed or go to restroom on her own, Ms. Wu would change her bedpan, bathe her, change her clothes, and prepare meals for her without any complaint. Ms. Wu cared for her mother-in-law for over half-a-year, and she soon became healthy again. Her mother-in-law told everyone she met, “My daughter-in-law is even closer to me than my daughter!”

In her everyday life, Ms. Wu took very good care of her child and taught her well. Besides taking good care of her parents-in-law and her child, every week she also went to visit her own parents. She was regarded by her neighbors as a model family member.

Ms. Wu followed the principles of Truthfulness-Compassion-Forbearance in every little aspect of her life, and she always put others first even when it came to small matters.

Seeing that so many lies were slandering Falun Gong and confusing people, Ms. Wu clarified the facts about the practice to some nearby people on May 23, 2006; it was then that she was arrested. At about 4 p.m., officer Li Yong from the Changan Police Station in Dadong District brought six other officers in three police vehicles to ransack Ms. Wu's home.

Early that early evening, Ms. Wu's husband, Mr. Ma Jiang, got off of work and returned home. The police tricked him into going with them, saying that they needed him to identify some personal belongings they had taken away. However, Mr. Ma was not allowed to return home and was instead taken to the Zhangshi Brainwashing Center, where he suffered inhumane abuse. There was only his parents, who were in their seventies, and his teenage daughter left at home. After his family's repeated efforts to appeal, the police reluctantly released Mr. Ma.

On the morning of September 15, 2006, Ms. Wu's family received a call from a woman at the Dadong District Court telling them that Ms. Wu would be tried at 10 a.m. The family rushed to the Dadong District Court and waited for over an hour, but the trial never took place. A couple of days later, the family was notified that the court had secretly sentenced Ms. Wu to seven years in prison, and the sentencing had taken place at the Shenyang Detention Center.

Facing the illegal trial and sentencing, Ms. Wu maintained that there was nothing wrong in her being a good person and telling people the truth about Falun Gong, and that her belief in Falun Gong is a citizen's right protected by the Chinese Constitution. Ms. Wu also went on a hunger strike to resist the illegal imprisonment, and because of her weak body, she was not allowed to be taken to the Liaoning Provincial Women's Prison.

In December 2006, Ms. Wu appealed to the Intermediate Court, but her appeal was denied.

Ms. Wu was soon taken to Liaoning Provincial Women's Prison. However, since she had acquired scabies while at the detention center, the prison refused to keep her, and she was returned her back to the detention center. When her family went to visit her there, the director turned down their request, citing, “Falun Gong practitioners are not allowed to be visited.”

On January 24, 2007, Ms. Wu was taken to the Liaoning Provincial Women's Prison.

Attorney interfered with by the prison

On August 4, 2009, Ms. Wu's family hired renowned attorney Su Shixuan in Shenyang to build a defense for her trial. Mr. Su followed the proper legal procedures and examined Ms. Wu's case. However, when Mr. Su went to the Liaoning Provincial Women's Prison to talk with Ms. Wu, he was told that he needed to obtain a 'visitation permit' from the Liaoning Provincial Judiciary Bureau.

When Mr. Su went to the Liaoning Provincial Judiciary Bureau to obtain the permit, he was told that Ms. Wu must personally sign another document verifying the hiring of an attorney. However, the prison also told him that he needed to obtain the permit first in order to visit Ms. Wu. In this way, the Liaoning Provincial Judiciary Bureau and the prison worked in collusion to keep Ms. Wu and her lawyer away from each other.

After much difficulty, Mr. Su finally managed to meet with Ms. Wu, and after four years Mr. Su has finally submitted an appeal to the Shenyang Municipal Intermediate Court.

The Liaoning Provincial Women's Prison is surrounded by green trees, but at its core is a living hell that devastates the body and mind of good people who believe in Truthfulness-Compassion-Forbearance.

The first week that Ms. Wu was imprisoned, the warden ordered inmates Zhang Xueqing and Wang Chunjiao to take turns watching Ms. Wu. They were told to not allow her to sleep, and to force her to stand at all times without blinking her eyes in order to coerce her into “transforming” and giving up Falun Gong,

During the coldest days of winter, Ms. Wu had all her clothes stripped off except for her underwear and forced to stand outside. Other times, Zhang and Wang would pour cold water on her and use bottles filled with water to strike her in the face until her eyes would become swollen and bruised. Once, when Ms. Wu ran toward the outside to escape, she ran into a door frame, and her front teeth were broken. Eventually, from the immense pressure of coercion and beatings, Ms. Wu signed a “statement of transformation” against her conscious will.

Once, when Ms. Wu's father came to visit her, Ms. Wu wrote about the persecution she had experienced and secretly put it into her father's pocket. However, the prison personnel discovered it and locked her up in solitary confinement. They then dispatched inmates Cui Jing and Tang Yuanxiu to watch her around the clock. A new round of brainwashing and torture thus began.

Ms. Wu was forced to stand until 2 or 3 a.m. each night before being allowed to sleep. She would then be awakened at 6 a.m., and in the end her feet turned black from the prolonged standing. Despite her condition, the authorities forced Ms. Wu to read books that slandered Falun Gong every day. Warden Li Ying and chief Guo tried to force Ms. Wu to sign another “statement of transformation,” but Ms. Wu refused to compromise.

In such a state, Ms. Wu was locked in solitary confinement for three years. The warden did not dare to allow her access with others, so the authorities forced her to perform intensive slave labor in her cell from 7 a.m. to 7 p.m. Even though she did not have Falun Gong books to read and the warden did not allow her to do exercises, as a practitioner, Ms. Wu felt strongly that it was Falun Gong giving her the courage and strength to continue living.

The inmates at the prison were mostly criminals and murderers. The warden routinely had the inmates beaten, which made the prison a most terrifying and violent place.

After practicing Falun Gong, Ms. Wu set strict standards for herself, took good care of her family members, and kept her home in good order. In many ways she was the backbone of her family.

After her arrest, her husband shouldered the responsibility of keeping the family together. He also went to visit Ms. Wu every month and brought cash to her. He traveled to the prison countless times over the many years his wife was incarcerated. On the Chinese New Year in 2011, Ms. Wu's father lost consciousness due to his anxiety from missing his daughter.

Ms. Wu's daughter is currently attending junior high school and has to cope with the loneliness and sorrow that comes with her mother's death. Without her mother's love, instruction, and care, it is hard to imagine the sadness that she feels.

Like other Falun Gong practitioners, Ms. Wu had the fortune to encounter a practice that teaches people to become good by following the universal principles of Truthfulness-Compassion-Forbearance; she had found hope and the meaning of life.

Because of the practice, when her family members encountered pain or her mother-in-law went through a difficult illness, she put aside her own interests to fully care for others. When her neighbors had difficulties, she would help them without thinking about the gain and loss of her own well-being. When she saw people being deceived by the CCP's lies, she would disregard her own safety and clarify the facts about Falun Gong so that people could have the opportunity of a wonderful future. However, a person of such high morality was persecuted to death by her own government.

On June 4, 2013, and with sullen hearts, her family and friends paid tribute to her at her funeral.

The wrongs she experienced will not be buried or forgotten as time passes by. Those who have participated in persecuting her and other kind people will one day be tried as criminals in the court of history and punished by heaven. However, it is not yet too late to repent and make up for the crimes they have committed.