Indonesia: Raising Awareness About the Persecution of Falun Gong in China (Photos) 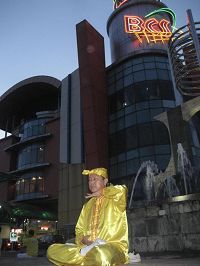 The many passersby included tourists from Singapore and China. A couple from Singapore watched the exercise demonstration for quite some time. The husband left with information materials about the practice, and said he would learn more about Falun Gong.

Practitioners assembled at City Hall Square the next morning to call attention to the Chinese Communist Party's (CCP) persecution of Falun Gong. They collected signatures on a petition calling for a stop to the CCP’s crime of live organ harvesting. The signature was initiated by Doctors Against Forced Organ Harvesting (DAFOH). 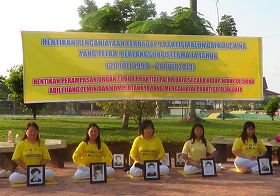 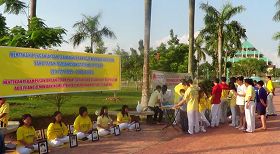 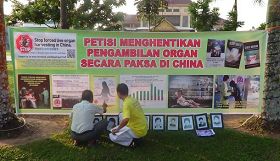 A passerby talks with a practitioner about Falun Gong

There were many people doing exercises on the square in the morning. The vast majority of visitors took informational materials with them and signed the petition opposing the persecution.

One man talked with a practitioner for quite a while. He said he was happy that Indonesia was not controlled by the communist party. He knows about Falun Gong and signed the petition to express his support.

“Argentina: Protesting the Persecution of Falun Gong in Front of the Chinese Embassy (Photos)”