(Minghui.org) Falun Gong practitioners in San Francisco held a series of activities on July 20, 2103, to call for an end to the brutal persecution of practitioners in China. The Chinese Communist Party (CCP) launched a violent campaign to suppress Falun Gong 14 years ago, and the oppression has continued to this day.

Practitioners began the day by doing Falun Gong exercises as a group at United Nations Plaza. They then held a grand parade through San Francisco's Chinatown. In addition, practitioners staged an anti-torture exhibit in the city's business district to demonstrate the vicious tortures that the Chinese regime has used on practitioners in China's detention facilities, forced labor camps and prisons.

Throughout the events, the practitioners encouraged Chinese people to separate themselves from the CCP's crimes against humanity by withdrawing from the Party and its affiliated organizations. 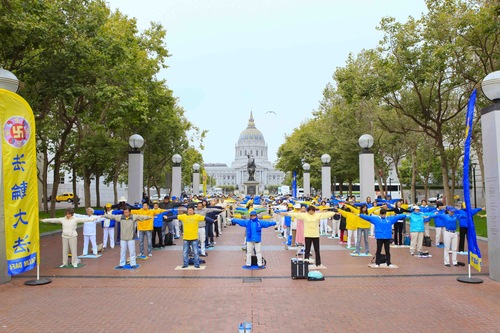 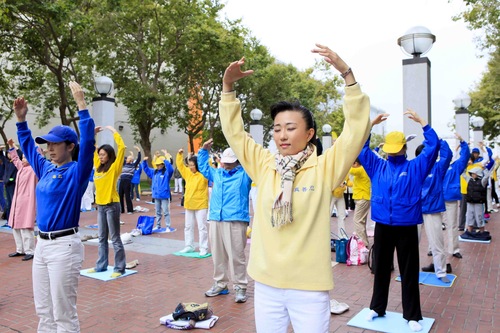 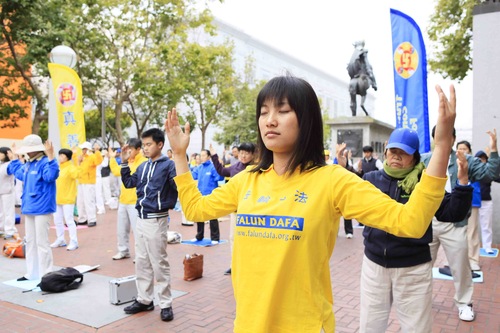 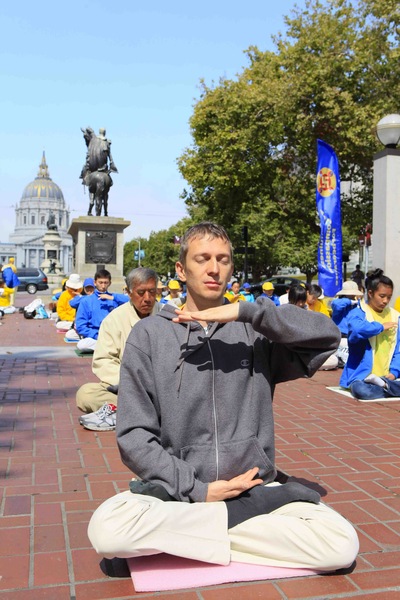 Practitioners do the Falun Gong exercises at United Nations Plaza. 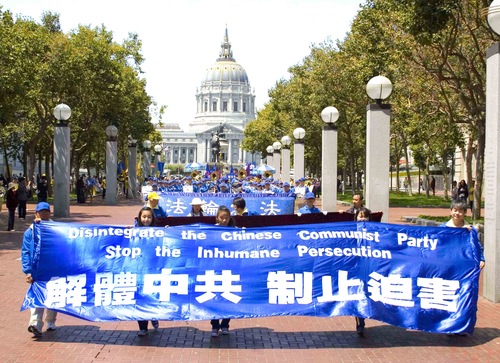 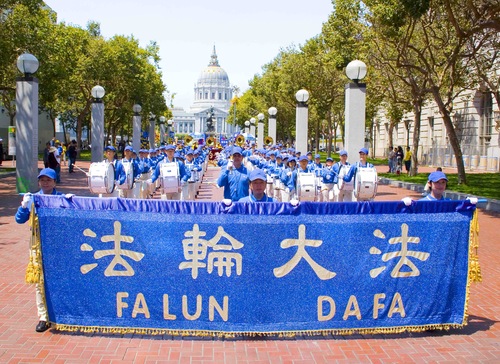 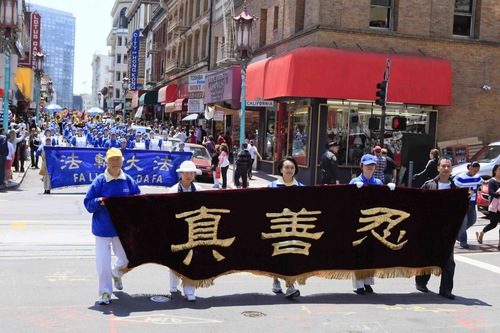 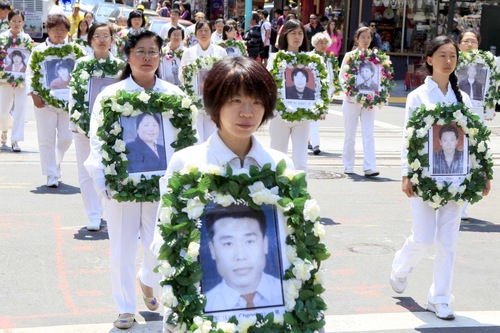 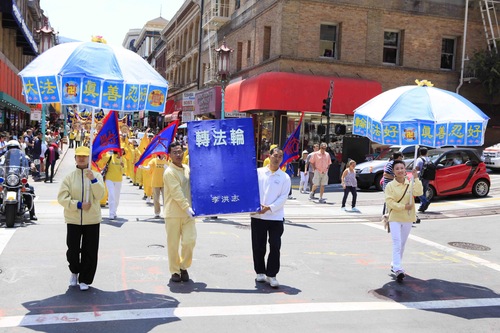 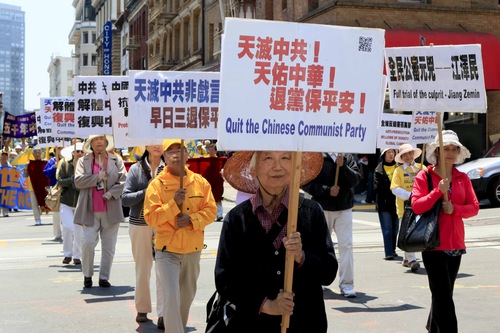 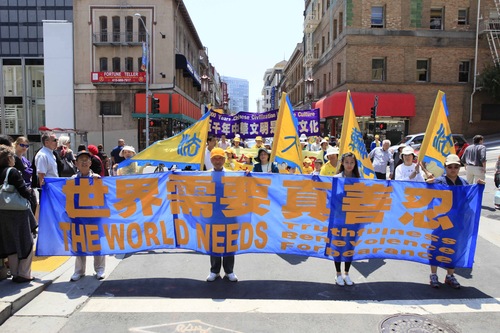 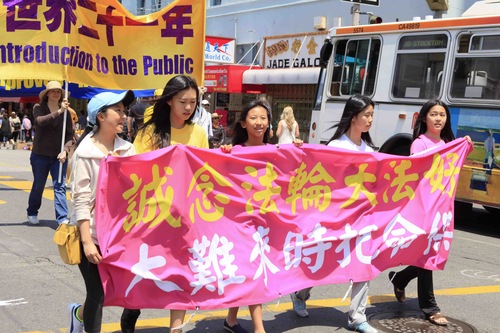 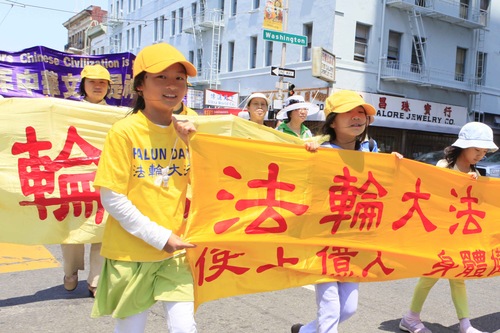 Practitioners hold a grand parade to call for the end of the persecution in China.

Resonant music of the band and the colorful procession fascinated many tourists and locals. They took pictures and video of the procession and happily accepted introductory materials about Falun Gong that practitioners distributed along the route. 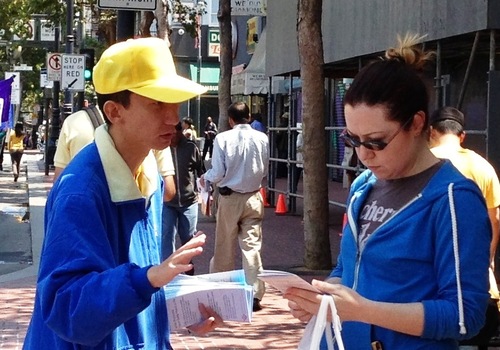 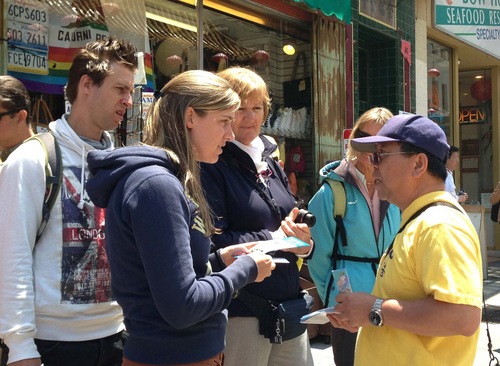 People speak to practitioners to learn about Falun Gong and the persecution in China.

Falun Gong practitioners in the parade came from all professions and walks of life. Mr. Guo Enzuo is an engineer in the Bay Area. He started practicing Falun Gong as a high school student in China in 1998. He has never gotten sick since then.

Both Mr. Guo and his family have been persecuted by the Chinese regime for practicing Falun Gong. He and his mother were illegally arrested in 2001. Mr. Guo was detained for two and a half months. His mother lost half of her body weight due to severe mistreatment in custody.

Mr. Guo said: “I feel it's my responsibility to tell people what the CCP is trying to cover up. Many Falun Gong practitioners are still under persecution in China. We will expose the persecution until it ends.”

Falun Gong practitioner Wang Xiao's mother, father and brother were thrown into prison for their faith. Her father, Wang Zhansuo, is still imprisoned in China.

While people in China do not have ready access to objective information and are bombarded by the communist regime's propaganda that slanders Falun Gong on a daily basis, people in other parts of the world have the choice to access the truth.

Ms. Wang said: “I hope overseas Chinese people will read information from the media that dare to expose the facts. I hope they will find out what Falun Gong truly is and why the persecution has happened. We hold activities today to provide an opportunity for people to learn the facts--to clearly see who is compassionate and who is evil--so that they will choose to stand with the righteous and have a bright future.”

Many Chinese tourists watched the parade, the likes of which cannot be seen in China today. They took pictures and video, and some even followed the procession.

Mr. and Mrs. Min from China told a Minghui reporter: “The persecution of Falun Gong is absolutely wrong!” They gladly renounced their membership in the CCP's Young Pioneers organization, which they had been forced to join in elementary school, to distance themselves from the regime.

Mrs. Alice Malloy and her husband were excited to see the parade. Mrs. Malloy was impressed that Falun Gong practitioners have chosen to expose the persecution through such peaceful means. The couple said they would tell their friends about it and hoped the persecution would end soon.

Deidre from Ohio said the Chinese regime's persecution of Falun Gong was inhuman and unacceptable. “It must stop!” she concluded.

Mr. Swing, a resident of San Francisco, admired the Falun Gong practitioners' peacefulness and persistence. She took the initiative to sign a petition calling for the support of House Resolution No. 281. The resolution, introduced by Congresswoman Ileana Ros-Lehtinen from Florida and Congressman Robert Andrews from New Jersey, calls on the Chinese regime to immediately cease the practice of forced organ harvesting from imprisoned Falun Gong practitioners and other prisoners of conscience.

Having previously learned about the oppressive nature of communist dictatorships, Mr. Swing said that the Chinese Communist Party's brutality against Falun Gong practitioners was simply appalling, and that in his view, it wouldn't be long before the CCP's collapse.

“Seizing the Time to Find Fellow Practitioners Who Have Fallen Behind”