Calgary, Canada: Falun Gong Practitioners Call for an End to the Persecution (Photos)

(Minghui.org) On July 20, Falun Gong practitioners in Calgary, Canada, held a rally and a candlelight vigil, condemning the 14-year persecution of Falun Gong in China, and calling upon the public to help stop the persecution. 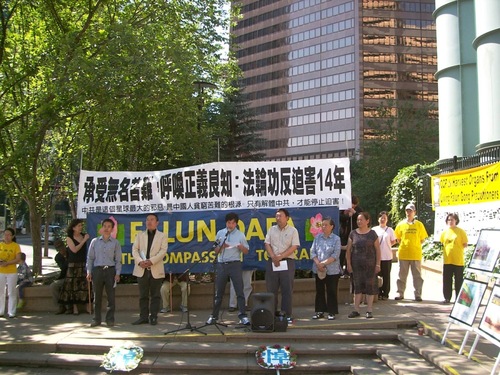 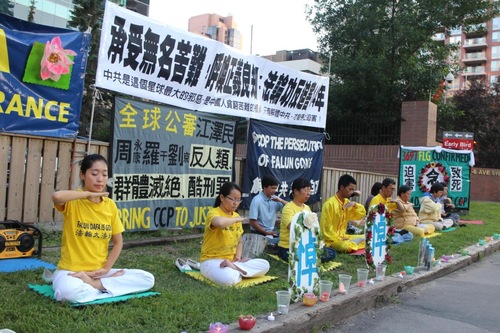 Candlelight vigil to commemorate practitioners who lost their lives in China

The rally was held in the morning in Chinatown, and later that evening, the candlelight vigil was held in front of the Chinese Consulate.

Six practitioners gave speeches at the rally. They briefly reviewed the history of the persecution, and introduced the trend of quitting the Chinese Communist Party. Ms. Huang told of her experiences of being tortured in a labor camp. Her husband and relatives were harassed by the police because she practices Falun Gong. Her daughter, also a Falun Gong practitioner who is still in China, was tortured in a labor camp, and is now homeless. Mr. Chen said that practicing Falun Gong healed his illnesses, but because he tried to talk to people about Falun Gong after the persecution began, he was arrested and fired by his workplace.

Practitioners called upon the public, especially the Chinese people, to recognize the evil nature of the communist party and renounce the party.

Many people stopped by the candlelight vigil. Some of them talked to practitioners, asking for more information about the persecution. A number of people expressed an interest in learning the Falun Gong exercises.