(Minghui.org) On July 20, 1999, the Chinese Communist Party (CCP) initiated a brutal persecution of the peaceful cultivation practice of Falun Gong. Since then, each year on July 20, Falun Gong practitioners around the world hold activities in memory of those who've died as a result of persecution, calling on people to learn the facts and help stop the atrocities.

Practitioners from various townships and towns in Yunlin County held a candlelight vigil in Douliuyuanhuan on July 20, 2013, calling on the global community to rescue the innocent and to stop the persecution. Legislator Mr. Liu Jianguo; Secretary Mr. Zhuang Zhaoyi; Executive Officer for Legislator Li Yingyuan, Ms. Huang Shumin; District Councilman Mr. Jiang Wendeng and other officials joined the activity and signed the petition calling for an end to the CCP's illegal organ harvesting of imprisoned Falun Gong practitioners. Many people signed the petition. A man from mainland China who happened to be there that evening registered a statement to quit the CCP and its affiliated organizations. He also signed the petition. 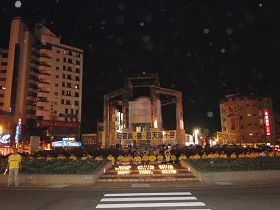 Practitioners from Yunlin County, Taiwan held a candlelight vigil in Douliuyuanhuan, calling on the International community to rescue the innocent and stop the persecution 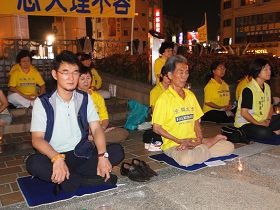 Legislator Mr. Liu Jianguo (first from the left) joined practitioners in memory of those persecuted to death 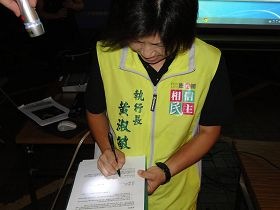 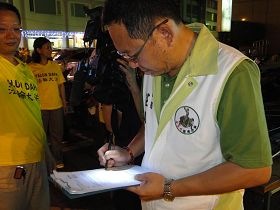 Practitioner Kate Zhang explained that the CCP ordered the persecution of Falun Gong on July 20, 1999. The Party has been persecuting practitioners under the policy of “Ruin their reputation; bankrupt them financially; and destroy them physically.” This unprecedented persecution has caused countless of practitioners to lose their lives and has forced countless to leave their homes to avoid illegal arrest. By holding such activities, practitioners hope to expose the CCP's crimes to the whole world.

Falun Gong is not the only group that is persecuted by the CCP, explained Ms. Zhang. The Chinese regime also persecutes human rights activists, members of Christian churches, Tibetans, Uyghurs and other Chinese citizens. It has even expanded the persecution overseas. Ms. Zhang said, “Practitioners stand up today, not only for Falun Gong, but also for a wide range of people in China. If Falun Gong practitioners don't stand up to expose the CCP's crimes and if other persecuted groups also remain silent, the CCP will have nothing to fear and will continue rampantly persecuting people. We call on individuals to seriously consider this matter. We hope that we will all come together to stop the persecution.”

Executive Officer for legislator Li Yingyuan, Ms. Huang Shumin also attended the candlelight vigil. She bowed deeply to show her respect to all practitioner and acknowledged their hard work in tirelessly exposing the persecution. Ms. Huang then sat down with practitioners throughout the candlelight vigil. After signing the petition to stop the organ harvesting, Ms. Huang said that practitioners' great effort was really admirable and has been noted by many people. She said that she would do her best to help practitioners, and also mentioned that she would like to practice Falun Gong.

District Councilman Mr. Jiang Wendeng said that faith is a universal value. He believes that heaven is watching and will not tolerate the CCP persecuting Falun Gong practitioners or killing them for their organs. He remarked that as long as we firmly hold onto Falun Gong's principles of Truthfulness-Compassion-Forbearance, the world's people will surely awaken. He said that he will forever support practitioners.

Mr. Yang from mainland China was dining in a restaurant near Douliuyuanhuan. That evening, he saw first hand practitioners peacefully commemorating those who've died and felt the wonderfulness of Falun Dafa. After learning the facts, he signed the petition to stop the CCP's crimes. He said that when he returns to China he'll look into the organ harvesting issue and will pay more attention to what's taking place in China. He said he'll read more reports from overseas.

Practitioner Ms. Li Cuiling said that she participated in this memorial with a heavy heart. She hopes that people's conscience and morality will quickly awaken and that more people will stand up to stop the persecution and rescue the innocent victims.