(Minghui.org) In the state of Florida, the practice of Falun Dafa has attracted people from different nationalities for its outstanding physical and mental benefits. There is a group of Vietnamese practitioners that has nearly 20 participants in Orlando, Florida. Below is the experience of one of them, Ms. Annie Cao, who recovered from severe depression after becoming a Falun Dafa practitioner.

In 2007, Annie Cao suffered from severe depression, consumed with fear and a sense of failure, very thin and unhealthy 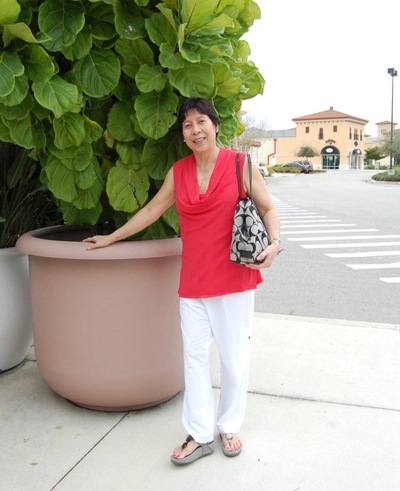 A year after starting to practice Falun Gong, Annie Cao in great health and spirits

Prior to 1999, Annie Cao's life was a happy one, with a wonderful family, perfect health, and a regular job. All of a sudden, a series of unfortunate happenings hit her hard and caused her health to deteriorate day by day. She recalled, “I lived in fear and suspicion every day, without a single thread of hope. I wanted to die. I was quick tempered all the time. In the following years, I saw different doctors and took different medications, all with little effect. I felt my situation deteriorating and out of control.

“I was miserable for seven years. In 2007, I was still on different medications despite no improvement in my depression. I also suffered severe insomnia. Even when I could manage to sleep for a few hours using sleeping pills, I would wake up with nightmares and my mind in a state of confusion. I became anorexic and lost a lot of weight. I was a bag of bones. I feared light and noise. I always worried that invisible evil beings wanted to do me harm. I isolated myself from friends and acquaintances, even my own family. Sometimes the sirens of ambulances or police vehicles would frighten me terribly.

“I shaved my head. I kept thinking that I wanted to leave human society and become a nun. After that, my family took turns watching me day and night. Except for taking medications and eating, I locked myself up in a dark room. The light in my life was dimming and about to go out.”

Annie's husband and children took her to see all kinds of famous doctors, from oriental medicine to western medicine to psychiatry. As long as there was a shred of hope, they would give it a try. One day in 2009, Annie talked on the phone with one of her mother's friends, who was a Falun Gong practitioner. The practitioner told her about witnessing the miraculous nature of Falun Dafa.

Annie said, “I spoke with her for several hours. What she said was so encouraging and exciting. From that moment on, I wanted to become a Falun Gong practitioner myself.

She introduced me to another Vietnamese practitioner in Florida. I immediately contacted that practitioner, who mailed me the book Zhuan Falun and exercise teaching DVD. I then started practicing Falun Gong.”

Annie later recalled, “My life underwent earthshaking changes after that. As I started to read the book, I knew this was what I had been seeking, a path of cultivation. During my sick days, I was not myself at all. I kept saying weird things and could not make any rational decisions. Only when my main consciousness became a little stronger did Master arrange for me to be introduced to Falun Gong. I know I must endure the hardship and tribulation to repay my karma. I am so lucky that when I had the opportunity to obtain the Fa, I did not have the attachment to seeking a cure for my illness.”

As Annie started reading the Fa diligently, there were a lot of things in the book she could not understand. So her husband read the book to her and explained the words that she did not understand. Her husband would first learn and figure out how to do each exercise and then teach it to Annie. Thus the couple started practicing together. After a year now, her husband has become a practitioner himself.

The miracle happened a few months after Annie started practicing Falun Gong. Annie said, “A month afterwards, my health improved a lot. I believed Master and the Fa and conducted myself according to the principles of Truthfulness-Compassion-Forbearance. In a few months, I stopped all medications altogether and felt much better than before. My eyesight returned to normal and my rheumatism disappeared. My appetite also came back. I now enjoy sound sleep and no nightmares ever disturb me.”

“Every day I am aware of my gratitude to Master. Day by day I assimilate more to the Fa, get rid of more attachments, and become more and more compassionate and tolerant of the people around me.”

Annie returned to a regular job. Except for when she is working, she makes arrangements and time to study the Fa, do the exercises, and send righteous thoughts. Her health is completely restored. Her family is also grateful because she has been returned to them a healthy individual.

She enjoys her simple but fulfilling life, and she shares her experience whenever she comes across someone with a predestined relationship. She said, “Master has arranged everything for me. He saved me from desperation and gave me a brand new life. More importantly, Master pointed out a path of cultivation for me. My personal experience is a testimonial to the miraculous nature of Falun Dafa. Dafa is so vast and boundless, like the ocean, and I am a lucky little fish swimming in the sparkling fresh water. I thank Master from the bottom of my heart.”

“Improving Myself while Doing Graphic Design for a Shen Yun Project”