(Minghui.org) I was purchasing supplies at Changchun Technology City Market on March 5, 2005, when several police officers jumped me from behind. I was grabbed around the neck, so I could not yell, while another officer covered my eyes so I would not see who was attacking me. Someone else twisted my arms and pulled my legs down. In total four to five people knocked me down, a 58-year-old man. They also took my cash, over 20,000 yuan. The two officers from the Changchun Police Department were named Wang and Jin. The others were from Dehui City.

I was taken to Changchun Police Department, where officer Jin pinched each of my fingers with bamboo chopsticks. He said, “This old man's bones are tough enough to break these chopsticks!” 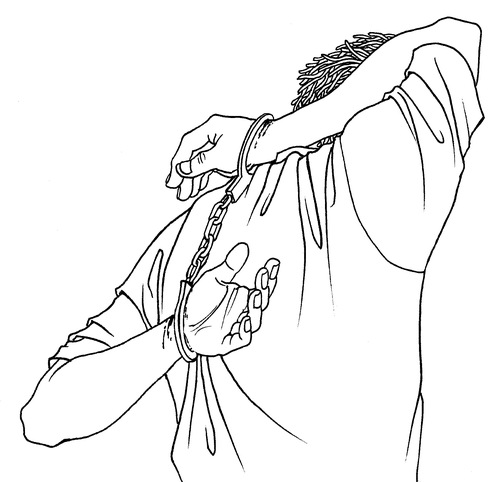 Torture re-enactment: Handcuffed behind the back with one arm over the shoulder

Officer Wang handcuffed my hands behind my back with one arm over my shoulder. He then pulled the cuffs up over and over. I was tortured for over twenty hours. I was taken to Dehui Hotel (where the Dehui 610 Office is located), where the torture continued.

I was force fed with water, suffocated with a plastic bag, and my handcuffs were stomped on. The officers also pulled my collarbone, beat me, soaked my clothes with cold water during a cold winter, and interrogated me to find out the location of a Falun Dafa materials production site. I was deprived of sleep for eight consecutive days. Whenever I dozed off, they began beating and kicking me. My heart was racing. They tried to force me to give them information when I was semiconscious. 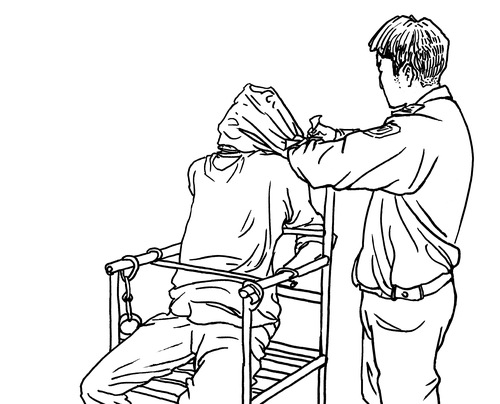 After about six days without sleep, my head felt like it was splitting. I was afraid that I would reveal information when I was semiconscious, so I bit down on my tongue to restrain myself, but I could not do it.

During those eight long days, Li Yuke, the Dehui City 610 Office director, was giving the orders, while officers Zhang Qingchun and Wang Tiejun from Dehui Police Department Domestic Security Division, and officers Wang and Jin from the Changchun Police Department tortured me. They sat me a chair, grabbed my hair, and pulled my head back against the back of the chair, then used a dirty rag to cover my nose and sealed it with a plastic bag, so I had to breath through my mouth. They used an aluminum bucket and two large water bottles to pour water into my mouth while screaming at me. They did this several times per day.

When they saw me desperately trying to close my mouth, officer Wang Tiejun tied two pairs of chopsticks together and used them to force my mouth open. He also tied my ankles to the chair legs so I could not move.

Water was continually poured down my throat as the officers screamed at me. I could not breathe and my eyes were bulging. When I could no longer hold my breath, a large amount of water went into my lungs. I coughed so hard that droplets of blood flew out of my mouth, and my heart beat so fast I thought it would burst out of my chest. My stomach was filled with so much water, it felt ready to burst. I felt water come out of my penis and anus, but later realized it was blood. There was large amount of bloody water on the ground.

As the torture continued, it felt as if my lungs were choked to pieces. Each time they poured gallons of water into me, my heart was ready to burst, and I struggled desperately to survive. I was tortured like this for eight days and seven nights, without sleep. When they let me out of the chair on the eighth day and handcuffed me to a desk, I was completely exhausted and passed out on the cold concrete.

I was taken to Dehui Detention Center on the ninth day. I had severe chest pain, and rapid, short breathing. A bad smell came out of my mouth, so the inmates gave me two layers of masks to stifle it, because they could not handle it. I was in critical condition after twenty days, and was then released.

When I got home, I threw up pieces of lung. The pieces looked like pink corn. My children and relatives burst out crying when they saw it, and they were scared to death. My lung was severely damaged, and I began coughing up large amounts of blood, daily. Through Fa study and doing the exercises, I finally stopped coughing up blood in early 2008.

As I was being tortured, I constantly yelled, “Falun Dafa is good!” They were afraid others might hear it, since we were in a hotel with paying customers. They began torturing me only at night. During the day they opened the window, poured cold water all over me, and soaked my clothes. It was frigid winter in Northeastern China in March, so my clothes froze--it was very, very cold!

I was again tortured with water suffocation late at night, followed by my head being covered with a plastic bag. When I bit one open, they covered my head with two or three more bags. Guard Wang Tiejun counted until I became limp and no longer struggled. They thought I was dead, but after I breathed hard once, they covered me again with a plastic bag, again and again, until I passed out.

This was followed by stomping on my handcuffs. They handcuffed my hands behind my back with my armpits over the backrest of the chair. Guard Zhang Qingchun stepped on my handcuffs with one foot, then supporting himself with his hands on my shoulders, he lifted up his other leg, exerting his entire weight on my handcuffs. He did it over and over, asking, “Hey, feels good, right?” The handcuffs quickly cut into my wrists, and blood ran down all over the ground.

Zhang Qingchun stuck his hands into my neck, picked me up by my collarbone, and pulled me up. It felt as if all my joints had been dislocated. The guards took turns beating me. One guard punched me in the chest, and I heard my ribs break. I was in so much pain I could not breathe. He then punched my face, nose, and eyes. I was bleeding. I could not open my eyes, but I felt blood running down my face to my mouth; it was salty.

I said, “You guys already beat my wife to death. Do you want to kill me this way?” He asked me what I meant. I closed my eyes and tried my best to clarify the truth to him despite the tremendous pain. I told him that my wife had also practiced Falun Gong and abided by the principles of Truthfulness-Compassion-Forbearance, and the police had beaten her to death. I asked him, “What is better? Truthfulness-Compassion-Forbearance, or deceit, evil, and struggle?”

Maybe his conscience was awakened. He got a towel and cleaned the blood off my face. He stopped beating me, but my vision has since worsened significantly. Another guard kicked me in the hip with his heavy-duty shoes, screaming, “Can you shout 'Falun Dafa is good' now? Go ahead and shout again and see if anyone can hear you.” These violent police officers exemplified the evilness of the Chinese Communist Party.

“I Know You've Come to Wake Me Up”