(Minghui.org) Practitioners in Ireland held a rally and parade on July13, 2013 in the capitol city, Dublin, to expose the Chinese Communist Party's (CCP) 14-year-long persecution of Falun Gong. They also clarified the facts about the regime's practice of harvesting organs from living Falun Gong practitioners, and called on kind-hearted people to help stop these crimes against humanity. 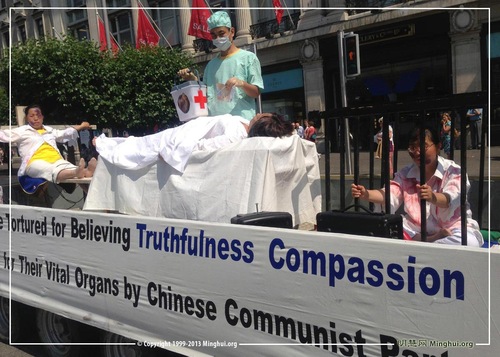 The parade started in central Dublin's Memorial Park, and ended with a rally in front of the General Post Office, the city center's most famous landmark.

At the rally, practitioners condemned the Chinese regime for harvesting organs from living Falun Gong practitioners. Many passersby stopped to watch, then asked for Falun Gong informational materials.

While the parade was passing along Parnell Street, which is home to many Chinese shops, some Chinese people raised their thumbs, saying, "Well done!"

The enacted scenes of torture and organ harvesting deeply shocked locals and tourists alike. Many people signed a petition calling for an end to the Chinese Communist regime's organ harvesting from living Falun Gong practitioners.

An Irish couple said that they had never heard of anything so cruel and evil as the CCP's practice of harvesting organs from living people. The wife not only signed the petition, but also wrote down the names of her three brothers. She said if her family had known about this, they would certainly agree that these crimes against humanity must be stopped.

On July 10, three days before the rally, the Irish Parliament met to discuss legislation that would address the Chinese Communist regime's practice of live organ harvesting. Members of Parliament who attended the meeting expressed hope that the legislation would pass, which will help bring attention to the crimes committed by the CCP.

“Australia: Falun Gong Practitioners in Sydney Rally for the End of the Persecution (Photos)”