(Minghui.org) Several Falun Gong practitioners were arrested and incarcerated in the Heilongjiang Drug Rehab Forced Labor Camp. The labor camp authorities did not release any information about the practitioners and prevented them from seeing their families and lawyers, which is common in Falun Gong persecution cases. However, as a result of pressure from outside human rights groups, the authorities eventually had to agree to let the practitioners meet with their lawyers.

In October 2012, the police arrested Ms. Liu Lijie and Ms. Zhao Juan from Jiamusi, Heilongjiang Province, along with several other practitioners. They incarcerated in the Heilongjiang Drug Rehab Forced Labor Camp. The practitioners were denied family visits. The families of Ms. Liu and Ms. Zhao hired lawyers from Beijing to represent them.

Their lawyers have served the related agencies with letters to secure their right to meet with their clients. These agencies included the Heilongjiang Forced Labor Camp and its management bureau, the Daowai District Court in Harbin City, the Heilongjiang High Court, and the Provincial Legal Office. The lawyers also sued the forced labor camp for its illegal conduct in denying the practitioners their right to legal counsel.

The labor camp authorities tried to interfere with the lawyers and prevented them from seeing their clients, saying that it was the rule in Heilongjiang Province. Amnesty International and the United Nations Human Rights Council were alerted. Officials from these two human rights organizations talked to the head of the labor camp and officials in various offices in Heilongjiang. The situation was also reported by overseas media.

On February 20, 2013, Ms. Liu's lawyer finally got to see her for 40 minutes. However, they were separated by a glass wall and had to speak through a phone. They were closely monitored, and everything they did and said had to be reported. The lawyer asked to speak to Ms. Liu face to face in private, but his request was denied. Three female guards were standing next to Ms. Liu and two male guards next to the lawyer during the entire 40 minutes. Their phone conversation was often interrupted because the authorities believed that Ms. Liu had said something she should not have.

On February 21, Ms. Zhao's lawyer talked to her, also under strict surveillance.

On September 10, 2012, about 50 plainclothes officers from the Public Security Bureau in Jiamusi City broke into three houses without showing any legal documents to the inhabitants. They arrested 15 Falun Gong practitioners and their family members. After detaining them overnight, ten of the practitioners were taken to the Jiamusi Detention Center.

After they arrived at the camp, these practitioners were taken to the Fourth Brigade on the third floor. The captain of the Fourth Brigade was Jing Jie, the guards were Zhang Jingchuan, Shi Shuai, Lu Boya, Liu Li and Wang Haiying. Lv Peihong was the collaborator. This special brigade was organized for the persecution of Falun Gong practitioners. Practitioners had to wake up at 5:00 a.m. and were not allowed to go to sleep until midnight, nor were they allowed to take naps. Every practitioner had to sit on a small stool (less than a foot tall) and watch TV programs that slandered Falun Gong or that had other brainwashing content. They did this to try to force the practitioners to renounce their belief in Falun Gong. When the practitioners refused to watch or closed their eyes, they were verbally or physically abused.

When practitioners refused to renounce their belief, their sentences were prolonged. Those who continued to talk to the guards were locked in solitary and watched around the clock. They were not allowed to talk to anyone and were constantly beaten or verbally abused.

In the Fourth Brigade, everyone was forced to watch TV while sitting on a small stool every day. This prolonged sitting hurt their backs, made their legs numb, and injured their buttocks. Some practitioners developed bleeding sores on their buttocks. This went on every day in the camp. 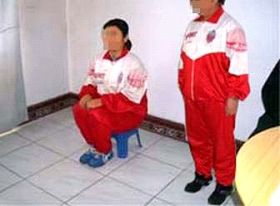 Torture reenactment: Sitting on a small stool for a prolonged periods of time

The seven practitioners in the Drug Rehab Forced Labor Camp were tormented physically and mentally. Ms. Xiang Xiaobo suffered a mental collapse and remains in an unstable condition. Ms. Ren Shuxian has severe heart problems and was taken to a hospital for emergency treatment. Ms. Liu Lijie has heart problems and her back and legs are in excruciating pain. Ms. Zhao Juan and Ms. Wang Yingxia are severely underweight and have heart problems. Ms. Zhang Shuying and Ms. Cui Xiuyun's conditions are not known.

Ever since the persecution of Falun Gong began in July 1999, this Drug Rehab Forced Labor Camp has imprisoned the most Falun Gong practitioners in Heilongjiang (except those from Harbin City). The camp cut off most of its communication to the outside and implemented brutal means of torture, worse than in other camps and prisons. This takes place under the direct orders of the Heilongjiang 610 Office and its budget comes directly from the provincial Ministry of Finance.

Information about the camp is highly controlled. The exact number of Falun Gong practitioners who died as a result of torture in this camp is unknown. Practitioner Ms. Liu Shuling was tied to an iron chair on July 3, 2010, and was shocked with electric batons until she died. 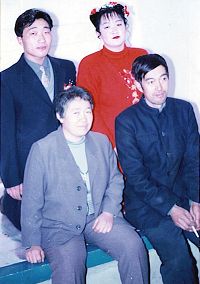 Practitioner Ms. Jiang Jingping from Jiamusi was released from the camp on October 31, 2011, and died the next month on November 30.

Personnel and agencies that have participated in the persecution of Falun Gong practitioners:

Huang Jiansheng, secretary of the Political and Legal Affairs Committee of Heilongjiang Province

“My Family Rejoices Together for the Goodness of Dafa ”