Japan: Practitioners Hold Rally and March in Tokyo to Raise Awareness of Persecution of Falun Gong in China (Photos)

(Minghui.org) Falun Gong practitioners in Japan held a march and a rally on July 15, 2013, in the downtown business district of Shinjuku, Tokyo. They called on people from all walks of life to help stop the Chinese Communist Party's (CCP) 14-year brutal persecution of Falun Gong, especially its illegal practice of harvesting organs from living Falun Gong practitioners. 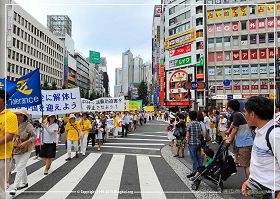 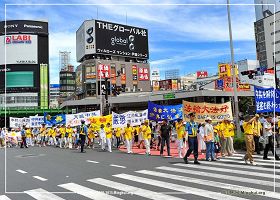 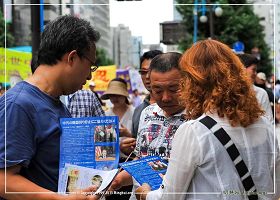 Japanese passersby learn the facts about the persecution of Falun Gong

Along the parade route, many asked for informational materials about Falun Gong and learned about the persecution.

“It's really unimaginable,” said a man from Chiba City after finding out that Falun Gong is being persecuted in China. “It must be stopped!” When he and his wife were told that the Chinese regime is also involved in harvesting organs from living Falun Gong practitioners, they said that the Party “had gone too far!”

Liu Suzhi, a Falun Gong practitioner from Nagoya, took part in the march. When she lived in China, she was sent to a forced labor camp on two separate occasions and was illegally arrested and detained many times. Her “crime” amounted to nothing more than her steadfast belief in Falun Gong.

“The cruelest torture that I had experienced was sleep deprivation,” said Ms. Liu. “As soon as I became even a little drowsy, they started to beat me. After a few days of being tortured like this, I felt like I was going to have a mental breakdown.”

Recalling the ordeals that she went through, Ms. Liu got choked up, then continued. “It was such a wonderful feeling arriving in Japan,” she said. “I could openly talk to people about Falun Gong and the persecution, and there were no negative consequences, like in China. The Japanese people who now know the truth about Falun Dafa have shown strong support for us. That's why I always participate in these marches and parades.

“In China, millions of Falun Gong practitioners have been severely tortured and abused. I'm here today to make sure that their voices are heard. I call upon all righteous people to step forward and help stop this senseless persecution!”

“Recognize the Deceptive Tactics of the CCP Guards”