(Minghui.org) “I feel great!” Leon Lemmon told the reporter. He used to suffer from a degenerative bone disease in his upper femur, but his symptoms miraculously disappeard after practicing Falun Dafa. “I read about how Master cleansed the bodies of Falun Dafa disciples, but I was still amazed when I personally experienced it. No words can express my gratitude to Master!”

Having earned two degrees, Leon worked for twenty-three years as coordinator of business in system financing operation for a petroleum giant in Houston. Despite his successful career, Leon suffered from pain in his upper femur. Due to an injury when he was only eleven, he went through surgeries on both femurs. He couldn't sit with legs crossed and had difficulty walking. Years of friction on these bones made his pain worse and worse. He was diagnosed with femur bone degeneration in 2001 and went through another surgery to have his right femur replaced. His doctor then informed him that his left one would require replacement in a few months.

In January 2002, Leon was amidst worry and suffering but then his wife Julia started practicing Falun Dafa. She was so happy with the benefits she'd received from this great practice that she asked Leon to try it too. He hesitated at first, however, he witnessed how significantly the practice had improved Julia's health and spirit, so he decided to give it a try.

Leon studied the main teachings of Falun Dafa in the book Zhuan Falun for six weeks. His heart resonated with the principles of “Truthfulness, Compassion and Forbearance” taught throughout the book. Leon's parents and grandparents often taught him to be a good person and to help others. Falun Dafa's teachings revealed a deeper, profound realm, and stressed virtue and the cultivation of heart nature. One should look inward for shortcomings, essentially improve and to always be considerate of others. After gaining a basic understanding of Falun Dafa, he started learning the exercises from his wife.

Leon could only meditate by sitting on a wood stool at first due to the his pain in his legs, so Julia made a thick sitting pad for him. A few days later, he felt that Master had started cleansing his body; he then felt very comfortable in the sitting position. His bones and muscles strengthened as he did the exercises daily. He kept changing to thinner and thinner seating pads, and eventually, he was able to sit on the floor to meditate. His left leg no longer required surgery. His high blood pressure also disappeared. Two years later, he crossed both legs during meditation. He truly experienced Falun Dafa's supernormal power. 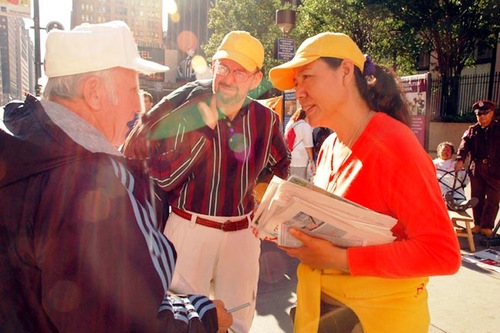 Leon (middle) and his wife Julia (right) introduce the benefits of Falun Dafa.

Leon and Julia never hesitate to share the benefits of Falun Dafa with others. One time, Leon and other practitioners participated in a Falun Dafa promotion activity in a border town. He recounted, “We walked in the sun on a hot day, demonstrated exercises and distributed brochures. We had to carry heavy bags with a laptop and print materials. People showed great interest, and we kept working for ten hours without rest. It was hard to believe, but my back and bottom didn't hurt a bit after standing for a whole day! I felt great the next morning!”

Moreover, Leon now understands through cultivation, the true causes of disease and tribulations in life, and that the significance of life is to return to one's true origin. He said, “I feel so fortunate to practice Falun Dafa!”

“Breaking through Internet Censorship for the People of China”