(Minghui.org) On July 6, 2013, practitioners in Australia held an activity in Sydney’s Chinatown to expose the Chinese Communist Party's (CCP) crimes of organ harvesting from living Falun Gong practitioners. They collected petition signatures from passersby and set up large banners and information posters detailing the Party's persecution of Falun Gong in China.

The practitioners introduced Falun Dafa to the local residents and told them how the practice is being brutally suppressed in China. Many people were angered by the CCP's brazen disregard for human life and quickly signed the petition calling on the international community to help stop these crimes. Several Chinese people quit the Party and its affiliated organizations, right then and there. 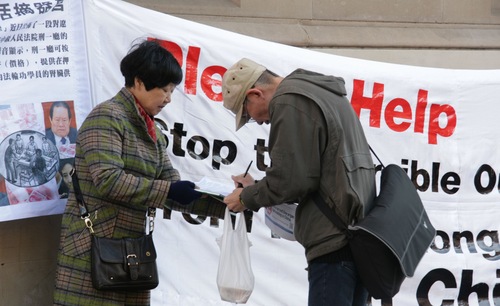 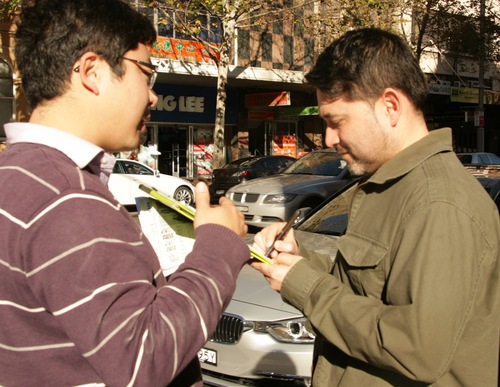 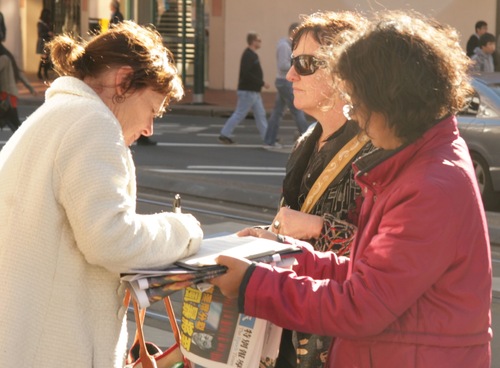 A mother and her two children signed the petition form then carefully looked at the Falun Gong informational posters. “Do you know what is happening in China?” she asked the kids while pointing to one particular photo. “These good people are being imprisoned,” she said. When her children asked her why this was happening, she explained, “Because they chose to follow their spiritual beliefs and would not give them up. As a result, the Chinese authorities put them in prison.”

A man from South Africa said that he knew a bit about the history of Falun Gong and about the persecution in China. When he was given the book, The Nine Commentaries on the Chinese Communist Party he said that he would read it carefully when he went home. “I want to understand this part of China's history,” he said. “I know that you are here every weekend so I will bring my friends to sign the petition, too.”

A man in a wheelchair came over to the practitioners and took off his hat. “You are doing the right thing,” he said. “If you don’t speak up, no one will know how cruelly practitioners are being persecuted in China. He profusely thanked everyone then took several fliers with him to share with his friends.

A Chinese woman who owns a gift shop in Chinatown told one of the practitioners: “Falun Gong practitioners are truly magnificent. I have been doing business on this street for a long time. I know that Falun Gong is a good practice because it teaches people how to be kind and it has great health benefits, too.

“Falun Gong used to be very popular in China, which struck fear in the hearts of many Chinese officials. It is the main reason that the Party started to persecute Falun Gong, something that should never have happened. No other country would ever do such a thing. The Chinese regime rules China with an iron fist, and as such, it has completely ruined China!”