“The United States must always stand on the side of freedom and liberty,” wrote Mr. Swalwell in a letter to U.S. Ambassador to China Gary F. Locke. “It is simply unconscionable to imprison someone for their political or religious beliefs. In addition, it is important that Chinese authorities be made aware of Mr. Wang's declining health and his need for appropriate medical care.” 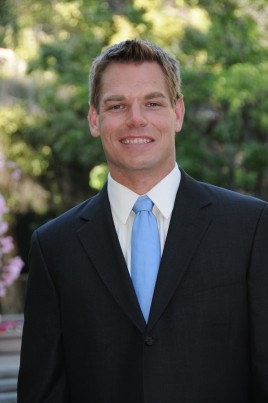 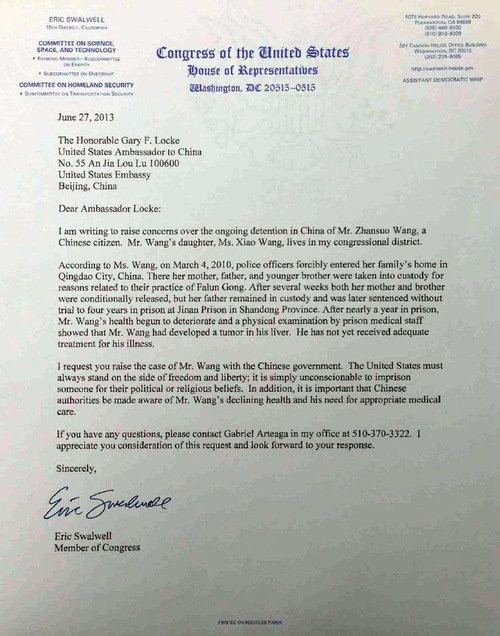 On March 4, 2010, local police officers in Qingdao City, China, forcibly entered the Wang residence and arrested Mr. Wang, his wife, and their son, for practicing Falun Gong. Ms. Wang's father was sentenced to four years in prison by the Huangdao District Court in October 2010.

Mr. Wang was physically and mentally abused during his first 10 months at the Huangdao District Detention Center. As a result, he became emaciated, had difficulty eating, and could hardly walk.

Despite his poor physical condition, Mr. Wang was brought to the Jinan Prison (also called Shandong Province No.1 Prison) in Jinan City, Shandong Province in January 2011, to finish the remainder of his prison term.

Upon physical examination, it was discovered that Mr. Wang had developed a tumor on his liver, and thus the Jinan Prison authorities refused to accept him. However, one month later, officers from the Huangdao Development Zone 610 Office colluded with Jinan Prison officials to accept Mr. Wang, despite his illness. Prison officials have yet to provide him with proper medical treatment.

Mr. Wang is incarcerated in Ward No.11 in the Jinan Prison.

“Building Skills to Save Sentient Beings”

“Attachments of Vanity and Lust Hide Behind Fame and Gain”