(Minghui.org) The beautiful seaside city of Huntington Beach, California, hosted the largest 4th of July Parade west of the Mississippi. The parade is a well-honored tradition that dates back more than a century.

The 2013 four-mile, three-hour parade brought out tens of thousands of people waving their American flags and cheering on the floats, marching bands, performers, and various groups.

Falun Dafa is the Largest Procession Out of 125 Groups

Falun Gong practitioners participated in the event with the largest line-up of all parade entries. The Falun Gong procession consisted of the Divine Land Marching Band, the Waist Drum Troupe, the Celestial Maiden Dance Group, and a float on which practitioners demonstrated the Falun Gong exercises. 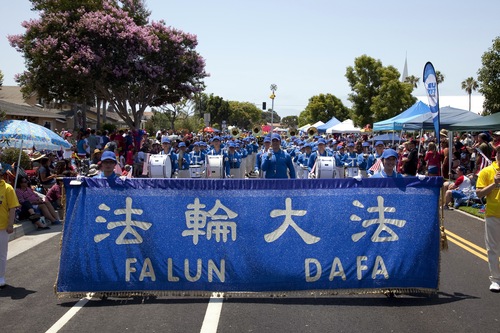 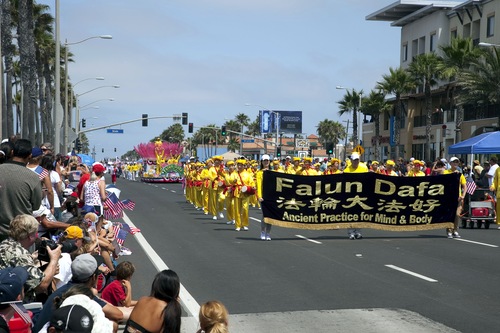 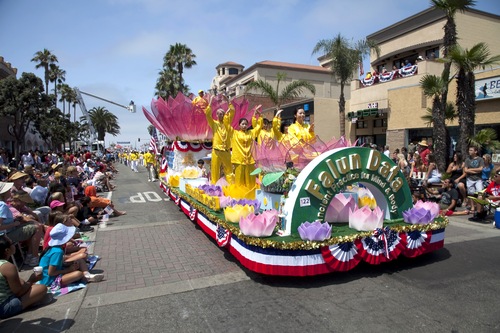 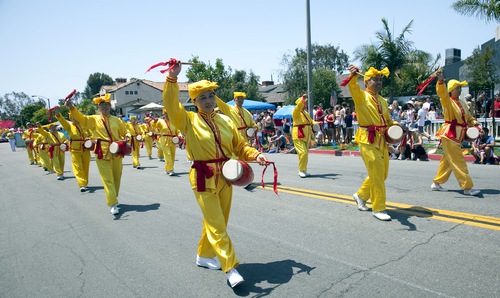 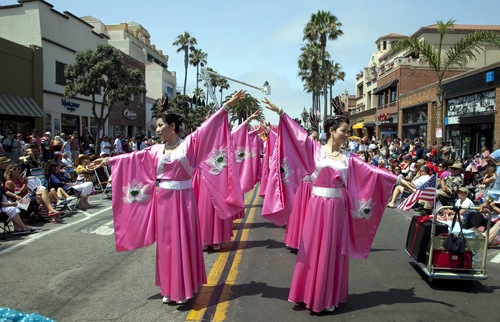 The captain of the 70-member Divine Land Marching Band, Abe Thomson, said he was excited to have the opportunity to spread the beauty of Falun Dafa to all of the enthusiastic spectators.

Don, who was in charge of decorating the float, said that this year's design was meant to draw peoples' attention to the practitioners doing the exercises on the float.

Practitioners wore yellow T-shirts with the words, “Falun Dafa is good,” and waved American flags while marching along the parade route.

Mr. Zhang, who is from Shanghai, China, immigrated to the United States in 2004. He now lives in Southern California. This was his second time seeing the Huntington Beach Parade. He took many photos of the event and said that he was impressed by the practitioners' discipline, their beautiful costumes, the melodic music, and the traditional Chinese dancing.

Mr. Zhang noted that if he was back in China, he would not be able to see Falun Gong marching in a parade. He expressed hope that the practitioners will one day bring their talents and goodness to China. “Today I feel especially free and excited,” Mr. Zhang enthused.

“Should I Offer Kickbacks to Customers?”