(Minghui.org) On June 7, 2013, Chinese President Xi Jinping and US President Barack Obama met at the Annenberg Retreat at Sunnylands, California. Falun Gong practitioners took this opportunity to call for an end to the 14-year-long persecution of Falun Gong in China and for the perpetrators to be brought to justice. The practitioners held a press conference and displayed banners beside Xi’s hotel and the Annenberg Retreat. 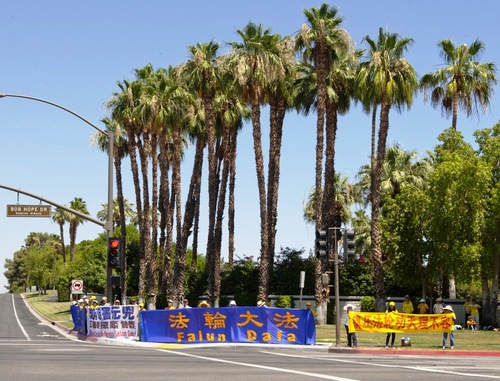 On June 6, the US Southwest Falun Dafa Association held a press conference condemning the Chinese Communist Party's (CCP) persecution of Falun Gong and calling for Jiang Zemin and other perpetrators to be brought to justice.

In a prepared statement, the association pointed out, “The CCP’s 14-year-long persecution of Falun Gong is the most severe human rights violation in the world. It must stop. The perpetrators, including Jiang Zemin, Luo Gan, Zhou Yongkang, Liu Jing, Zeng Qinghong, and Bo Xilai, must be brought to justice.

“On July 20, 1999, then CCP head Jiang Zemin initiated a bloody persecution of Falun Gong. Following his order to ‘kill without pardon,’ Chinese police have been brutally torturing of millions of Falun Gong practitioners. The most horrible crime is the communist regime's systemic harvesting of vital organs from living Falun Gong practitioners for profit. Due to the regime’s information blockade, we cannot know the full extent of this atrocity.”

The statement called on President Obama to put forward the issue of Falun Gong in order to help stop the persecution.

Practitioners tell of being persecuted in China

Dozens of practitioners who suffered persecution and torture in China participated in the press conference. Two of them shared firsthand accounts of their and their families' experiences of being persecuted.

Ms. Dafang Wang from San Francisco was arrested and imprisoned for going to Beijing to appeal for justice for Falun Gong. Her sister was tortured to death in Heizuizi Women's Forced Labor Camp in Jilin Province. Her older brother was tortured by the Changchun police and is still incarcerated in Siping Prison, Jilin Province.

Ms. Chunmei Ma, who now lives in Washington, DC, was imprisoned in Heizuizi Forced Labor Camp and tortured. She was forced to do hard labor for 18 to 19 hours a day. Her sister, Ma Chunling, is still imprisoned in Masanjia Forced Labor Camp. More than ten of her close friends in China died as a direct result of persecution.

Ms. Shuying Li is a retired physics teacher from Beijing. She started practicing Falun Gong in 1999. She recalled, “I was 52 years old. After practicing for half a year, all my illnesses were gone. The most delightful thing was that I understood the real meaning of life. One should not be selfish, but should be a good person of high virtue and open-minded. My brother, sister-in-law, younger sister and her daughter, two daughters of my elder sister, and my daughter and her husband all started practicing Falun Gong in 1999. My whole family practiced Dafa, and we were very happy.”

But after Jiang initiated the persecution in 1999, the family suffered terrible persecution.

Ms. Li recalled, “I was arrested and imprisoned four times for not giving up my belief. The longest was from February 2000 to February 2003 in Tuanhe Women's Forced Labor Camp in Beijing. My younger sister, her daughter, and my elder sister’s daughter were all imprisoned in the same camp.

“My elder sister’s daughter was young and had never experienced such intense pressure and torture. She suffered a mental breakdown. My younger sister was forced to take different drugs in detention. After ten months, she became emaciated and her legs had turned dark brown. Doctors said that her diabetes index reached 23 to 24, at a critical level.

“My elder brother was an engineer. The police monitored him constantly. The local administrative office, the 610 Office, and the residential committee frequently harassed him. He was under major pressure and passed away in April 2011.”

Falun Gong practitioners held banners calling for an end to the persecution near the Hyatt Hotel where President Xi stayed and along the road to the Annenberg Retreat. 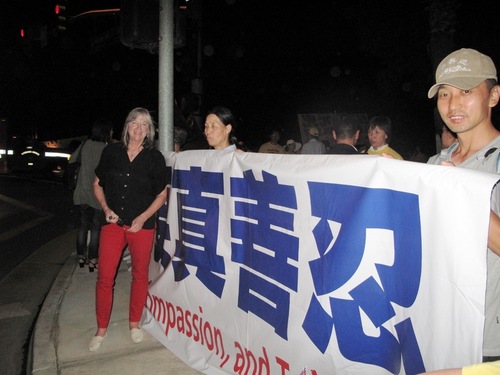 The activity caught the attention of the media and the local people. Christine Dickerson, minister of the Palm Springs Presbyterian Church, came out to express her support. She said she knew about Falun Gong and wanted to show her support personally.

She also said that if she could speak with President Obama, she would encourage him to talk directly with Xi Jinping on behalf of Falun Gong: “If we have a relationship with China, human rights must be respected.”