(Minghui.org) Helsinki, Finland, hosted its annual World Village Festival in Kaisaniemi Park and Railway Square on May 26 and 26. The popular event, which started back in 1995, attracted over 85,000 visitors. Ethnic groups from around the world met to exchange cultural views as well as music, food, dance, theater, and art.

Finnish practitioners participated in the World Village Festival to raise awareness about the Chinese Communist Party persecution of Falun Gong. One Chinese practitioner stood before an audience and recounted her experience of being illegally imprisoned for eight years for practicing Falun Gong in China.

She talked about how the police pressured her for 14 days and nights, trying to get her to agree to stop practicing Falun Gong. Besides sleep deprivation, they shocked her with electric batons and forced her to wear heavy shackles.

The audience was visibly moved as they quietly listened. When they heard that the Finnish government had helped rescue her so that she could be reunited with her husband—who had been separated from her for 11 years because of the persecution—the audience broke out in enthusiastic applause. 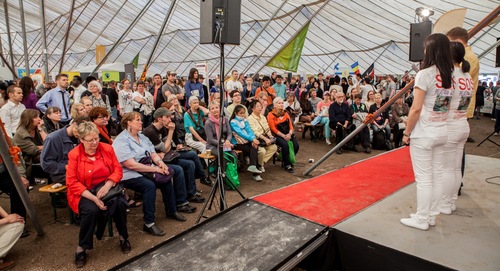 Amnesty International calls for the release of Ms. Chen Zhenping, who is illegally detained in China

Amnesty International showed its support for Falun Gong by calling for the rescue of Ms. Chen Zhenping, a practitioner living in Henan Province, China. Anu Tuukkanen, Amnesty's representative, talked about the lack of human rights in China and the ongoing persecution of Falun Gong. She called on the audience to work together to help rescue Ms. Chen.

Ms. Chen's two daughters, Jin Zhaohuan and Jin Zhaoyu, who live in Finland, were also invited to address the audience.

In 2008, Ms. Chen was arrested by National Security agents from Zhengzhou City and secretly sentenced to eight years in prison by the Jinshui District People's Court. She is incarcerated in the Xinxiang City Women's Prison in Henan Province. Ms. Chen's solicitor, Li Subin, has not been allowed to see her since her arrest. Each week, the prison warden reminds Ms. Chen not to tell anyone that she has been persecuted.

The guards ordered several criminals to pressure Ms. Chen to renounce Falun Gong. They deprived her of sleep for extended periods of time and stole the money and credit cards that her family had sent her so that she could buy basic daily necessities.

The audience listened very carefully, then signed the petition calling for the rescue of Ms. Chen.

Many people stopped by the Falun Gong booth, asking for more information on the practice. When they found out about the persecution, they signed the petition. 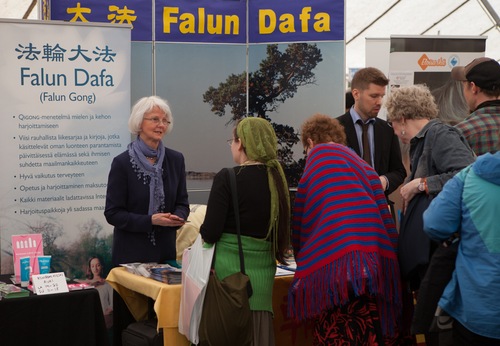 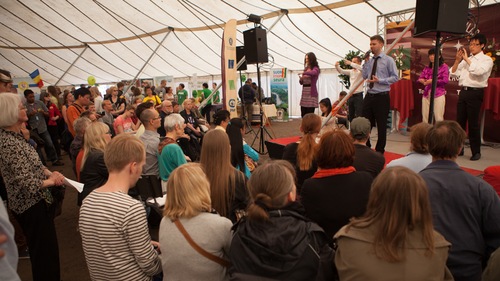 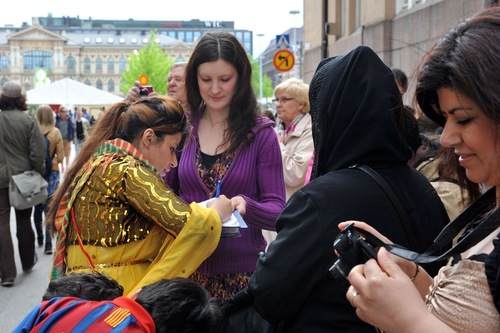 Passersby sign a petition condemning the persecution of Falun Gong

Six young men were appalled when they found out about the Chinese regime's live organ harvesting from Falun Gong practitioners. As they were signing the petition, they said that they would tell everyone they knew about the situation.

An elderly lady said that she had been to China many years ago and had seen practitioners doing the five gentle exercises in different parks. However, after openly supporting Falun Gong and other persecuted groups in China, the Chinese embassy now refuses to issue her a visitor's visa.

"I've already signed this petition,” she said, “but today I am going to sign it again. I have been supporting you for years now, because you are all good people!"

A practitioner handed some Dafa materials to a young Finnish girl, who then left. About two hours later, she returned to the booth and signed the petition. Some people exclaimed, "It's very important that everyone gets involved!"

It was indeed very moving to see people waiting in line to sign the petition!

“Who Turned Them Into Demons?”

“The Story of How Falun Dafa Came to Our Village”