(Minghui.org) The Art of Zhen, Shan, Ren International Exhibition returned to Ottawa, Canada for a second time this year for a showing at City Hall on May 27-29, 2013.

Kathy Gillis, one of the artists, spoke at the opening ceremony. She said that besides their backgrounds in art, the artists share in common the practice of Falun Gong.

“We want to tell people the stories of Falun Gong through clear and pure paintings. As artists, we need give up our selfishness. We don't paint for ourselves. We paint for others. We want to let them know what has been happening. This is why you won't see giant signatures of the artists on the paintings,” she said.

She also thanked Falun Gong practitioners around the world, who have helped to organize 800 exhibitions in more than 50 countries. 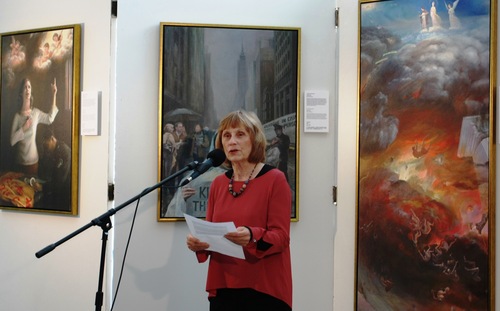 Kathy Gillis, one of the artists of the exhibition, speaks at the opening ceremony 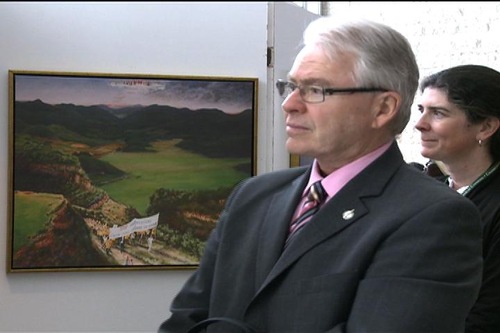 Mr. Hyer said that people can clearly see from the artworks how brutal the persecution is. “Although my belief is not Falun Gong, I support them, for everybody has right of free belief,” he said.

Mr. Hyer agrees with the principle of Zhen-Shan-Ren (Truthfulness-Compassion-Forbearance). He said that the artwork gives people hope. Mr. Hyer said that the Canadian government should not cooperate with the Chinese government if democracy and human rights are not carried out in China. “We should try to change the situation in China, when good people are persecuted,” he said.

Also in attendance was Brian McAdam, an internationally renowned expert on China affairs and former Canadian diplomat. He praised the artworks as excellent expressions of Falun Gong practitioners. “Although they have experienced horrible persecution, they still have solid belief. They have amazing courage,” he said. 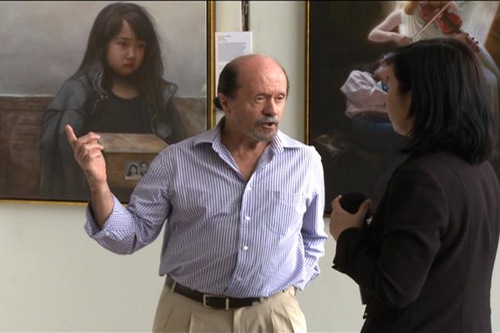 Brian McAdam, an expert on China affairs, at the exhibition

Mr. McAdam said that the artworks evoke different emotions, some peaceful, some sad. He believes that the art exhibition helps inform people about the Chinese Communist Party. “People must know that there is not only business trade, skyscrapers, and cars in China, there is also persecution going on there every day,” he said. He urges Canadian politicians to learn about the party's crimes. “David Matas has said that the organ harvesting is 'a form of evil yet to be seen on this planet.' That is the communist party's action. It is the worst political power in history,” he said.

Haleigh McClenaghan, employee of the city government, said that she had seen Falun Gong practitioners' activities in Manhattan, New York, when she was 18. She learned about the persecution of Falun Gong back then. The artwork showed her a side of Falun Gong she hadn't known before, and she was touched by the artwork that depicted sad stories in a beautiful way.

Many guests were moved by the paintings and left comments of support and appreciation in the guestbook.

“People Are Blessed for Their Kind Deeds”