(Minghui.org) In mid-June 2013, two young Swedish practitioners, Marcus and Olivia, brought the beauty of Falun Dafa to the people of Bornholm Island, Denmark. Often referred to as the "Baltic Pearl," the quaint island is located in the middle of the Baltic Sea, 125 miles east of Copenhagen and just 25 miles from neighboring Sweden in the north.

The practitioners used their personal vacation time to visit four schools where they taught the Falun Gong exercises and the importance of acting according to the principles of Truthfulness-Compassion-Forbearance. They also informed the children about the Chinese Communist Party's persecution of Falun Gong in China.

As fate would have it, the four schools that they had contacted were just about to introduce a 7-day learning program to their fourth grade class, focusing on China and Chinese culture.

Jonas Lilleskov, one of the school teachers, said: "There is a lot of content that we teach, including, geography, biology, and the Danish language. The students' assignments involve copious amounts of reading, writing, and research.

“Before the program actually starts, we spend weeks preparing the subject matter. The students don't just learn about Chinese culture from books, they also learn from observation, such as learning about Chinese traditional culture by way of the Falun Gong exercises.”

Out of the four schools that the practitioners had visited, only one school principal and one physical education teacher had some prior knowledge of Falun Gong. Thus, they were grateful to have the opportunity to learn the five sets of Dafa exercises.

Some schools had arranged for a one-hour exercise class, but extended it to one and half hours, in order for the practitioners to have enough time to teach all five exercises.

Before the practitioners entered the classroom, the children were busily playing and carrying on. However, as soon as the Dafa exercise class started, they immediately became quiet, almost like magic. This both surprised and amazed the teachers who were present. They had never seen anything like that before! 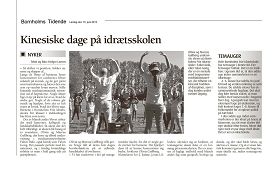 On June 15, the Danish newspaper, Bornholms Tidende, published an article titled, "Sports School's China Day." The article stated: "Two Swedes visited several schools on the island to teach the Falun Gong exercises. This perfectly matched with the timing of the schools' special fourth-grade program on China.

“On Tuesday morning, everyone practiced the exercises on the school's front lawn. It was sunny outside and the two Falun Gong practitioners were very happy to spend a part of their five-day vacation to teach the children the exercises.”

"Change positions, close your eyes, relax,” the article went on to say. “Most children listened to the instructions very carefully, with the exercise music playing in the background. Some children opened their eyes to check their hand positions, while the two instructors went back and forth, correcting the children's movements."

In order to help everyone study the Falun Dafa teachings and learn the exercises, the practitioners gave each teacher and student a copy of the book, Falun Gong, in Danish. The practitioners also showed everyone how to download additional information on Falun Gong from the Internet

As the practitioners' five-day stay was quickly drawing to a close, they realized that some fourth graders had not yet had the opportunity to learn the exercises. After a brief discussion with the teachers, the school arranged to have the practitioners come back to the island to teach the exercises and bring the beauty of Falun Dafa to more people.