(Mingui.org) Thailand's Dude TV aired a segment about Falun Gong on its Health and Exercise program, on June 21, 2013. Reporters from the TV station visited a local exercise site in Lumpini Park, Bangkok, and took footage of the practitioners doing the five gentle exercises. 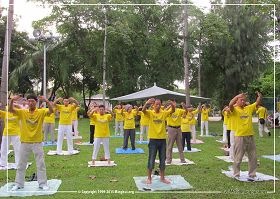 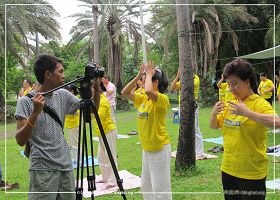 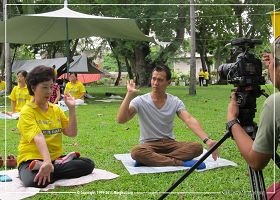 A practitioner teaches a Dude TV reporter the exercises

When the reporters found out about Falun Gong from the Internet, they decided to do a report on the practice itself, its principles of Truthfulness-Compassion-Forbearance, its amazing health benefits, and its worldwide popularity.

After practitioners told them about the Chinese Communist Party harvesting organs from living Falun Gong practitioners, and the ongoing 14-year persecution of the practice, the reporters and camera crew were visibly shocked.

The TV crew said that they fully supported the practitioners' efforts to counter the persecution of Falun Gong. They also seemed fascinated by the beautiful exercise movements and music. Some crew members asked to learn the exercises right then and there.

“California Newspaper Reports on Persecution of Falun Gong in China”