(Minghui.org) The United Nations Human Rights Council (UNHRC) held its 23rd session on June 5, 2013, in Geneva, Switzerland. The attending Canadian delegation once again expressed its concern over religious persecution around the world, especially as it relates to Falun Gong in China.

Shrugging Off Pressure from Chinese Ambassador

Canada's Globe and Mail newspaper published an article on June 7, titled, “New Religious-freedom Watchdog Faces Uphill Battle.” The article reveals that Zhang Junsai, the Chinese ambassador to Canada, expressed displeasure with Canadian Prime Minister Stephen Harper's decision to single out religious persecution in China in February, while discussing the creation of the Office of Religious Freedom.

Andrew Bennett, Ambassador of the Office of Religious Freedom, said during a discussion with Zhang that “he would be firm on the need to speak out about China [religious freedom] when necessary.”

“When it comes to human rights and particularly freedom of religion,” Mr. Bennett pointed out, “we will continue to express our concerns in that area.”

The Globe and Mail also cited Mr. Bennett as saying, “I said to him [Zhang Junsai] at the time, that I will be meeting with groups such as Tibetan Buddhists, Falun Gong, and Christians. I don't think he was particularly pleased with that.”

Mr. Bennett met with members of the Canadian Falun Dafa Association in mid-May and further learned about the Chinese regime's persecution of Falun Gong.

Speaking Out Against Religious Persecution 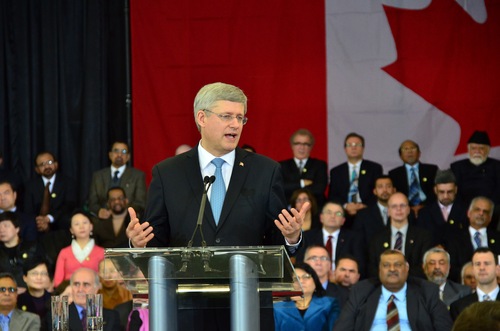 At a press conference on February 19, 2013, Mr. Harper announced the establishment of the Office of Religious Freedom within the Department of Foreign Affairs and International Trade. In his opening remarks, he mentioned the persecution of Falun Gong in China, saying it was a concern of the Canadian government.

“In China, Christians who worship outside government approved boundaries are driven underground and their leaders are arrested and detained while Uighur Muslims, Tibetan Buddhists, and Falun Gong practitioners are subjected to repression and intimidation,” the prime minister explained.

He added, “The list, appallingly goes on. In the face of these injustices and atrocities, Canada will not be silent.”

Minister of Citizenship, Immigration, and Multiculturalism, Jason Kenney, told reporters at the press conference, that Falun Gong practitioners in China, as well as underground Christians, Tibetan Buddhists, and Uighur Muslims, are groups that needed to be protected. He affirmed, “We will speak for them.”

Canada Continues to Condemn the Persecution of Falun Gong

Since the persecution of Falun Gong began in 1999, the Canadian government has repeatedly raised the issue of religious freedom with China. At the UNHRC's 22rd session held on March 5, 2012, Canada's Foreign Affairs Minister John Baird said that Canada condemns the egregious acts against converts and members of religious minorities in various parts of the world, including violent repression, discrimination, threats, and attacks on places of worship.