(Minghui.org) It was a beautiful day on Belle Isle Park on May 4, 2013. Falun Gong practitioners in the Greater Detroit area celebrated World Falun Dafa Day, the birthday of Master Li Hongzhi, the founder of Falun Dafa, and the 21st anniversary of Falun Dafa's public introduction.

Falun Gong practitioners do the exercises on the Detroit River bank 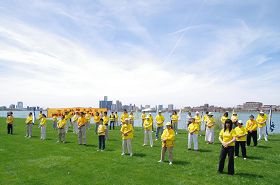 Falun Gong practitioners do the exercises on the Detroit River bank 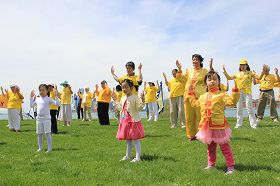 Children practicing the exercises along with the adults 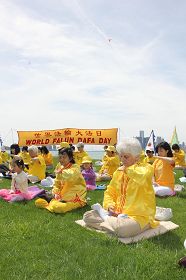 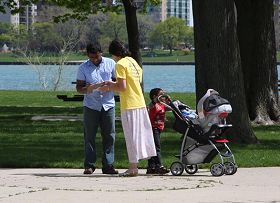 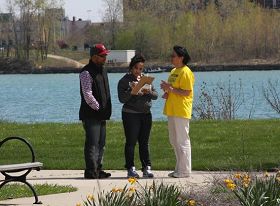 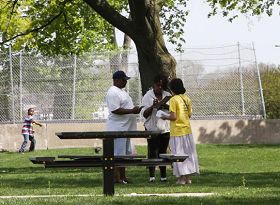 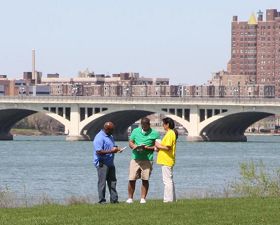 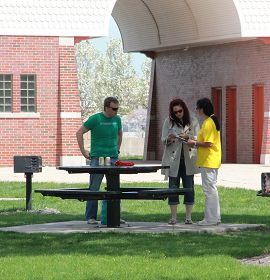 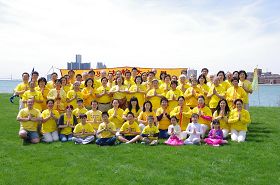 Colorful flags and a large banner that read, “World Falun Dafa Day” decorated the beautiful Detroit River bank. Falun Gong practitioners from various walks of life did the peaceful exercises together. Their common faith in Truthfulness, Compassion, and Forbearance brought them together. They have also persistently worked together to stop the persecution of Falun Gong in China, launched fourteen years ago by the Communist regime.

Falun Gong practitioners took this opportunity to further raise awareness about the persecution of Falun Gong. They collected signatures to be submitted to Michigan government leaders, and encouraged people to sign the petition on the White House’s “We the People” website, asking the U.S. government to investigate and publicly condemn organ transplant abuses in China, particularly those carried out against Falun Gong prisoners.

Ms. Wu is a new practitioner and former partner of a large law firm in China. She had uterine fibroids disappear soon after she began practicing Falun Gong. She feels younger and more energetic. Ms. Wu said, “I'm nearly moved to tears every time I hear the exercise music. Thanks to Master! Thanks to Falun Dafa! I have gained a new life! It is such pity when people have misconceptions about Falun Dafa due to the Communist regime propaganda. I hope they will open the [Falun Dafa] book and take a look for themselves. If you have the destiny, you will be saved. Your health and family will benefit from it too.”

Many people went to the park to enjoy the nice weather. Falun Gong practitioners approached them with information about Falun Gong and the persecution in China. Many people signed the petition and expressed their support. A man who was jogging in the park said he always signed in support of good causes like this. He asked if he could take pictures of the practitioners doing the exercises so that he could share the information with his friends on Facebook. He told practitioners, “Keep up the good work!”

During the event, practitioners took a group picture with their hands pressed together in the “heshi” gesture of respect and said in unison, “Greetings to Master! Falun Dafa is great!”