(Minghui.org) April 25, 1999 changed many people's lives. On that day, more than ten thousand Falun Gong practitioners went to the State Council Appeals Office in Beijing, to peacefully uphold their right to freedom of belief. When the persecution of Falun Gong was fully unleashed not long afterwards, practitioners overseas also went to Chinese embassies or consulates to appeal in support of their fellow practitioners in China and to clarify the facts about Falun Gong. Fourteen years have since gone by, and practitioners often point to the April 25 event as a pivotal point in their lives. Lucy from Ottawa, Canada is among those who have deep feelings when she recalls this turning point in her life so many years ago. She shared her journey during a press conference at the Parliament of Canada. 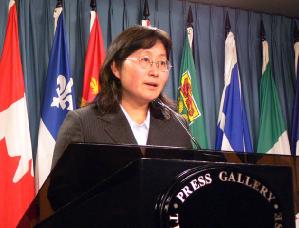 Lucy addresses a press conference at the Parliament of Canada

When the peaceful April 25 appeal took place in Beijing, Lucy and her husband were both working at a prestigious high-tech company in Ottawa, Canada. They had completed their postgraduate studies overseas after graduating from Qinghua University. “When we heard the news that Falun Gong practitioners went to appeal in Beijing after their fellow practitioners were illegally arrested in Tianjin, we immediately wrote a letter of appeal and brought it to the Chinese Embassy in Canada to express our feelings. I remember it was the weekend but a official came out and accepted our letter.”

Lucy and her husband were busy with their studies and work after they went overseas and the only time they returned home was in 1998. “By then, it was already very hard to get any Dafa books in China. Later, we managed to get books at a practice site in Tianjin. We joined the group exercise in the morning that day and shared cultivation experiences with local practitioners. I was deeply impressed by the peacefulness at the site. Many other people who were practicing qigong were also attracted to the site and started to practice Falun Gong.

After the April 25 appeal, the peaceful life of personal cultivation that Lucy and her husband had been enjoying underwent a big change. They became much busier, and prior to the formal launch of the persecution of Falun Gong by the Chinese Communist Party (CCP) on July 20, 1999, they often went to the Chinese Embassy to hand in letters of appeal, hoping that the Chinese leaders would learn about the goodness of Falun Dafa and would not persecute practitioners.

Practitioners inside China also wrote countless letters to their government leaders to clarify the facts. At that time, overseas media knew very little about Falun Gong and their reports on Falun Gong were reprints of what was reported by the regime's media in China. So Lucy and others went to various media offices to clarify the facts, telling them how she and others had benefited from Dafa cultivation.

However, despite practitioners' efforts to keep it from happening, the rampant persecution began on July 20, 1999. The lies and slanderous propaganda against Falun Gong were exported overseas. Lucy recalled, “We had a smooth life back in China and had always trusted the government. We were deeply shocked by the vicious defamatory lies and could not believe that the government could have fabricated such lies to confuse truth and falsehood! We felt a sense of responsibility to tell people the facts.

“One of the main reasons I decided to come overseas was because I was really sick of the complex interpersonal relationships and corruption in China. I had a car accident in 1992, which robbed me of my good health and all interest in living. Due to the serious sequelae from the accident, I could not stand or sit properly and I was in constant pain. I was very fortunate to obtain Dafa in 1996 and regained a new life. Dafa has given me more than I could ever imagine without asking for anything in return! Dafa solved all my problems and I could not imagine my life without cultivating in Dafa. I could never turn back to a life of ignorance without understanding the true meaning of life. I felt deep gratitude towards Dafa and I wanted to share with others the goodness of Dafa and how it can help people to be free from misery.

“When we introduced Falun Gong to people at health expos, I saw that people were keenly searching for ways to keep healthy and to live a long life, purchasing various vitamins and nourishment products. I thought: Poor people are living a hard life, while rich people are not happy either, as they are bothered with this worry or that worry. Yet, cultivation has freed us from the misery of illnesses and fear. We are living a happy, relaxed and carefree life.”

Lucy said that before the persecution started, there were more than 100 million people in China practicing Falun Gong, and 1 in every 13 people was a Falun Gong practitioner who conducted themselves according to the principles of Truth-Compassion-Forbearance. With so many people practicing and elevating their morals, it would surely elevate social morality and bring about bright and positive changes to society. The persecution not only deprived the Chinese people of the right to be good people, but also pushed the entire society to the opposite side of Truth-Compassion-Forbearance. This has essentially destroyed the cornerstone China relied on for its very existence. Now people have become more and more aware that the persecution of Falun Gong has resulted in a comprehensive destruction of morality and consequently, people are living in an acquisitive society which is in huge danger of ecological collapse. All this will bring about huge disasters to China.

At the beginning when the persecution first started, some “kindhearted” people told Lucy not to “dash herself against a rock like an egg” by putting herself in the category of “anti-China forces.” Lucy recalled, “At that time I really felt uncomfortable in my heart, thinking that I had always been part of the elite social sector and never imagined that I could have been pushed to the opposite side of the government. However, I also felt that I should live according to principle and there should be justice in society. If everyone clings to life and fears death out of self-interest and abandons principles, how terrible would society become?”

In October 1999, Lucy and two other practitioners went to the Chinese Embassy again. Because the embassy refused to accept their letter of appeal, they read it out loud in front to the embassy. “I still remember that the air was very suppressive, and for a moment, a wave of fear ran through me, as if I was facing the entire state apparatus of a violent autocracy. But immediately the fear was driven away by an upright thought: What we are doing is just and we are clearing out lies. I regained my strong determination and felt at ease,” said Lucy. Braving the chilly wind, they held up a banner worded: “The world needs Truth-Compassion-Tolerance. Stop persecuting Falun Gong.”

Some people have argued that the regime persecuted Falun Gong because too many people went to appeal in Beijing. Lucy said, “More than 100 million people practice Falun Gong but only ten thousand people went to appeal. How can that be too many? Besides, cultivation is a personal choice; it is not a mass movement nor is it being political. After such a long journey of cultivation, I'm sure that if asked if one would participate in the appeal in Beijing, all genuine cultivators would choose to step forward.”

Lucy explained what touched her heart the most regarding the peaceful April 25 appeal: “After the brutal 'June 4' massacre ten years earlier, this group of cultivators from all walks of life stepped forward again and faced the gross injustice done to them with pure compassion. With a pure heart, and without pursuing any personal interests, they stepped forward completely for the sake of others, for the sake of society. They went there to share the goodness of Falun Dafa.”

Lucy believes that everyone's life has limits, and selfishness can limit one's realm of life. “The choice we made during the peaceful April 25 appeal enabled us to elevate to a higher realm of life. We changed from being selfish, being clever to avoid danger in order to protect our self-interest, into unselfish beings who act for the sake of others and never consider their own loss or gain. What a great elevation it is! I feel that Falun Dafa has brought us a state of existence that all beings should have, and a stretch of pure land on earth,” she said.

“For years, we have been on the front line in the struggle against the evil persecution, and the peacefulness demonstrated by Falun Gong practitioners during the April 25 appeal has also become our normal bearing. It shows the goodness of Falun Dafa and gives us strength in suffocating the evil in dangerous situations.

“The April 25 peaceful appeal in 1999 was a good start, and over the last 14 years, whether we were holding press conferences in the Parliament of Canada, or suing the the CCP culprits responsible for the persecution and their mouth-piece media overseas that fabricated lies; whether we were braving ice and snow or the scorching sun to peacefully appeal in front of Parliament and the Chinese Embassy, or handing out the Nine Commentaries on the Communist Party and encouraging people to quit the CCP to free themselves from the evil specter; whether we established our own media for freedom of expression or host Shen Yun Performing Arts to revitalize Chinese traditional culture, what we have been doing is clarifying the facts to people, calling for conscience and striving to bring the principles of Truth-Compassion-Forbearance back to human society.”

Looking back at the journey she has traveled, Lucy admires the extraordinary power of Falun Dafa: “Our life has become meaningful because we are helping people who have been deceived by lies to know the truth so that they can choose a bright future for themselves. At the same time, our lives are also elevated in the cultivation process.”