(Minghui.org) On May 13, 2013, practitioners in Belgium celebrated the 14th Annual World Falun Dafa Day, marking the 21st anniversary of Falun Dafa's introduction to the public by Mr. Li Hongzhi in 1992.

Falun Dafa, also known as Falun Gong, is a traditional ancient Chinese spiritual practice for improving the mind and body. It is currently practiced by people of all nationalities and races in over 100 countries around the world. In July 1999, the then-leader of China, Jiang Zemin, unleashed a campaign of terror to suppress Falun Gong, after discovering that the number of practitioners exceeded the number of Chinese Communist Party members. The Chinese regime has continued to persecute this peaceful meditation practice to this day. Practitioners in Belgium introduced Falun Gong to both the residents of Boechout City and the town of Boom. They also held truth clarification activities and demonstrated the five Falun Gong exercises. 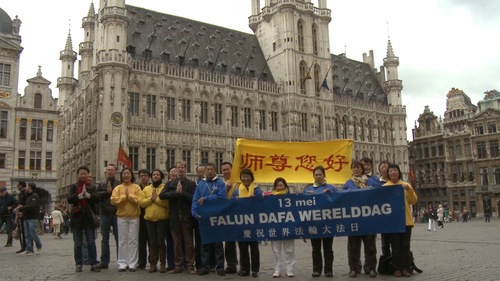 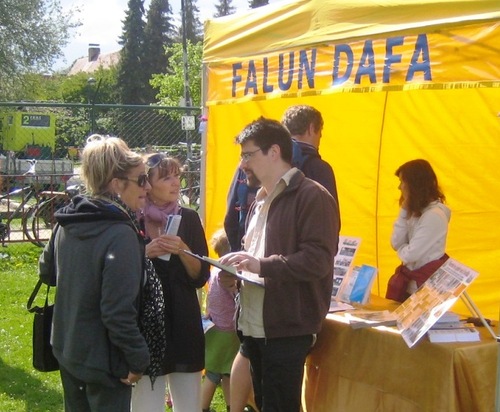 On May 9-11, Belgium practitioners attended a locally sponsored event. They handed out Dafa-related brochures and asked passersby to sign a petition calling for an end to the persecution in China.

People who had not known about the persecution were appalled when they found out. “This is horrible!” some exclaimed. “Why isn't the media exposing these atrocities?” Some people said, “Tell us what we can do to support you.”

A young female student said that she had heard about Falun Gong from a former teacher in Antwerp, who taught her the five Dafa exercises. She asked a practitioner to email her some petition forms so that she could collect signatures in her school.

Nick, a local practitioner, said that he had gained a brand new understanding of himself and the world around him after practicing Falun Gong.

“Before I began the practice,” he explained, “I suffered from serious allergy attacks each spring and relied heavily on prescription drugs just to get me through the day. Whenever I lay down to sleep, my breathing became particularly labored.”

He added, “Now, I don’t need to take those drugs anymore because my body has been purified by practicing Dafa.”

Nick also talked about how his relationship with his brother had changed. “My brother and I have very different personalities,” he said, “so we used to argue a lot. Now, that we both practice Dafa, we are a lot closer to each other. My father also became a practitioner.

“Although my mother does not practice, she strongly supports us, because she has seen the great changes our family has gone through. We all genuinely care about each other.

“I deeply appreciate the happiness and joy that Dafa has brought into my life and into my family. Thank you Master Li for showing me the way back home. I wish you a happy birthday!”

Another local practitioner, Isabella, said, “After my husband and I started practicing Falun Gong, we introduced it to our children. We are no longer overly concerned about material possessions and are much more optimistic. We sincerely appreciate the opportunity to practice Falun Dafa, which continues to bring untold joy into our lives.”

Falun Dafa Teaches People How to be Good

Xiao Yan talked about how Dafa has dramatically changed her life. “One of the biggest changes that I had observed after taking up the practice, she noted, “was that my character had greatly improved. I know I should conduct myself and adhere to traditional moral values, and I am getting better all the time.”

She said she is now able to look at things from a completely different angle. “I always thought that life was not fair,” she explained, “but after I learned Falun Dafa, I realized that life is fair to everyone!

“Now, I have a deeper understanding about the world. I know that I can no longer measure or judge others according to my own personal standards because my standards are often intermingled with my selfishness, which is not fair to anyone. The true standard to measure everything against is Truthfulness-Compassion-Forbearance, which is not some simple moral standard or rules for living a good life.”

She said she is now able to appreciate the positive aspects of others that she had overlooked in the past. “I learned to enjoy the good things about others and now appreciate everything and everyone that I meet in my life, even if that thing or person causes me some form of pain or sadness. Like the ancient Chinese saying goes: 'The best taste is bitterness and every disadvantage is a blessing in disguise.'”

She continued, “I used to quarrel with my parents every day. Now, things are different. I know that filial piety is not about giving gifts on holidays or giving my parents material things based on my own likes and notions. Rather, it is to try to understand them: how they think, how they feel, and the daily hardships that they both face. Our family is now calm, harmonious, and happy.”

A new practitioner, Chui, said that last year she, her mom, and several of their friends had attended the Art of Zhen Shan Ren International Exhibition, held in the City of Hasselt.

“When an exhibit guide told us the stories behind the artwork, I was deeply touched,” she said. “The paintings showed how Falun Gong practitioners are being severely persecuted by the Chinese regime for conducting themselves according to the principles of Truthfulness-Compassion-Forbearance. Not long after, I went to the local Falun Dafa practice site and eventually became a practitioner.”

When asked how practicing Dafa had impacted her life, Chui replied, “I used to have a bad temper but now I am a lot more considerate of others. I get along with everyone, including my mother, who I used to argue with virtually every day.”

Chui concluded, “I will continue to advance in my cultivation and feel extremely fortunate to have the opportunity to practice Dafa.”

Ms. Yang said that Falun Dafa taught her how to be a good, genuine person who always considers others first.

“I used to be very pessimistic, Ms. Yang noted. “I didn't know the real meaning of life. But after I started practicing Falun Gong, I found true inner joy. I now know why I came to this world and what my purpose in life is. Truthfulness-Compassion-Forbearance are the principles that I use to guide my life.

“These principles teach me how to be a good person, how to handle my personal relationships, and how to deal with conflicts. By living according to these ancient principles, I find that my mind is continually being purified. Although people in society are being negatively influenced every day, Falun Gong brings me a real sense of peace!”