(Minghui.org) In support of Falun Gong practitioner Mr. Li Lankui, 1,371 villagers have signed or imprinted their fingerprints on a letter of appeal in Zhengding County, Hebei Province. Mr. Li has been illegally detained at a detention center for 15 months.

Mr. Li, an elderly man who made a living by collecting waste, was illegally arrested by the local 610 Office with the excuse of “safeguarding security” in June 2012, when Iowa Governor Terry Branstad was on a brief visit to Zhengding County from the US.

The arrest aroused intense discontent in the area. Local villagers started to sign and circulate a letter of appeal and demanded that the Chinese regime immediately release Li.

Recently, 16 other Falun Gong practitioners have been taken into custody illegally in reprisal, by Gao Guo, deputy director of the Zhengding County Public Security Bureau. They have suffered severe persecution, including being tortured to extract a “confession,” handcuffed to an iron chair, deprived of sleep, beaten, and even shocked with electric batons. Currently, three of those 16 practitioners are still in detention.

The villagers have submitted a series of appeal letters with 306, 903, 1,108 and now 1,371 thumbprints and signatures calling for Mr. Li Lankui's immediate release. 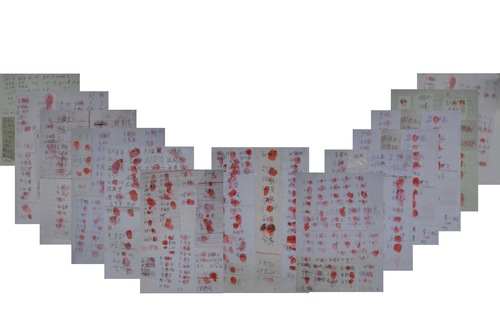 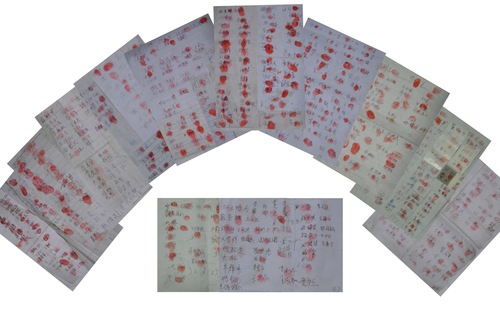 One 50-year-old woman said, when asked to sign the petition, “I will do it. This is a good deed. Saving others is saving myself!” She added, “Falun Dafa is good. And I will stand by your side.”

When a Dafa practitioner collecting signatures was passing a construction field, four or five workers withdrew their memberships from the Chinese Communist Party and its affiliated organizations after learning the truth about the persecution. One of them asked, “Are you a practitioner? Please tell us more about Falun Gong!”

After the practitioner told them the story of Li Lankui, one worker said, “I will sign the letter! We know Falun Dafa is good!” They all signed or imprinted their fingerprints on the appeal letter.

A woman said to another practitioner collecting signatures, “All of the practitioners in our village are nice people and we benefit from their cultivation, too. So many disasters have happened in recent years, yet our village has not been affected at all. To rescue a Falun Gong practitioner, I will stamp my fingerprint on the letter. All the villagers will do the same thing.”

A cadre working in the town government said, “As Falun Gong practitioners living according to Truthfulness-Compassion-Forbearance are acknowledged as good people, I have never given them a hard time. Those 610 Office officials and policemen do not get down to work. To rescue a Falun Gong practitioner, I will sign the letter.”

Mr. Li had recovered from being immobilized and bedridden within a month after he started practicing Falun Gong. He got rid of all his bad habits and became very kind to his wife; he also became an honest man. His wife’s seizure disorder disappeared completely after she started practicing Falun Gong. More and more villagers started cultivation practice after hearing their amazing stories and about 200 people joined the local practice site.

In an interview by NTDTV, a peasant said, “An honest man! A good man! A warm-hearted man! I am confused why they put him in jail.”

Another local villager said in an interview with Sound of Hope Radio, “All the villagers are talking about this now! Why was such an obviously kind person arrested? He has a good relationship with us. I wish for his immediate release. All of us long for the quick return of this good man!”