(Minghui.org) The Falun Dafa Cultivation Experience Sharing Conference held in New York on May 19, 2013, drew many Falun Gong practitioners from all over the world to take part in a series of activities in Manhattan beginning May 17. They explained how Falun Gong has benefited millions of people both physically and mentally. They raised awareness about the brutal persecution in China that has gone on for more than 14 years.

On the morning of May 17, on the street opposite the UN in Manhattan, Falun Gong practitioners lined up in an orderly fashion along one side of the avenue to do the peaceful Falun Gong exercises. The line extended so far that no end was in sight.

They came from many different countries and lead different lives, but they have all benefited tremendously from practicing Falun Gong. 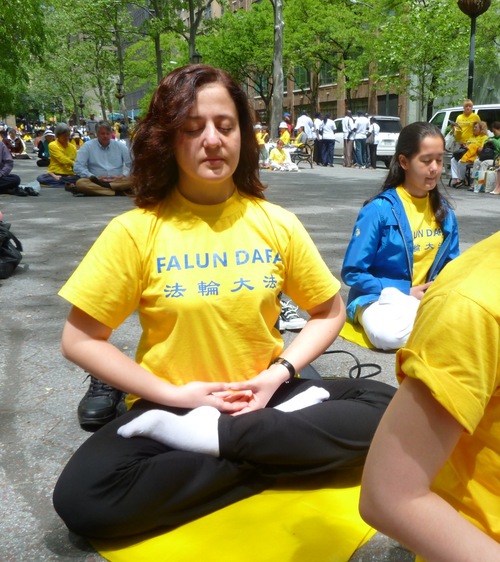 Ms. Aynur Demirkan from Turkey has been a Falun Dafa practitioner for 13 years. She used to suffer from many health problems, especially postpartum tetany after her baby was born. She suffered from chronic stomach pain, and pain from an old knee injury.

After she began practicing Falun Dafa, all these ailments disappeared. Ms. Demirkan feels very fortunate and was delighted to come to New York to be together with so many other practitioners. She hopes to help more people learn about the practice. She wants to let others know that people in Turkey also practice Falun Dafa, that it has been embraced by people in every corner of the world, and people of all nationalities have benefited from it. 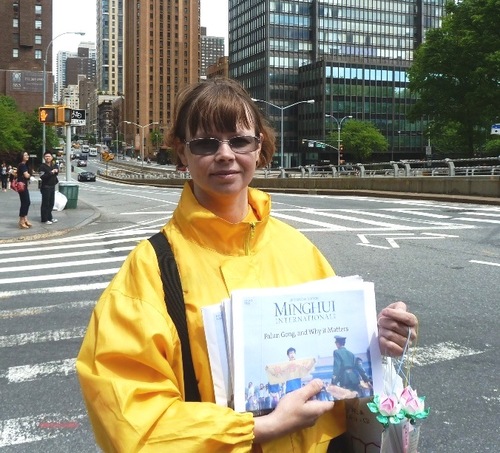 Ms. Neil Li from St. Petersburg, Russia, is a veterinarian with 20 years of experience. She began practicing Falun Dafa in 2002, and this was her third New York Fa conference. She was very happy. Ms. Li said, “I had searched for a cultivation way for a long time. One of my former qigong teachers told me about Falun Gong. As I began to learn about Dafa, I felt I had a predestined relationship with it. Since I began the practice, I have quit smoking, and my frequent stomachaches have ceased. Falun Gong has miraculous effects on people's health. That's my personal experience.” 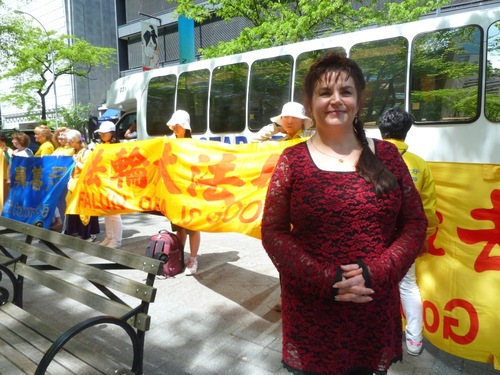 Ms. Tracey O'Dwyer-Minogue from Ireland began practicing Falun Gong in 2005. It seemed to be a coincidence that she saw a flyer about Falun Gong in the city library. She thought Falun Gong was different from other such disciplines. All it took to begin the practice was a book and a mat for meditation. Cultivation has meant a lot to her. She feels that she has been purified both physically and mentally. Her life has become meaningful. Since 2006, she has attended the New York Fa conference every year, for the past eight years. 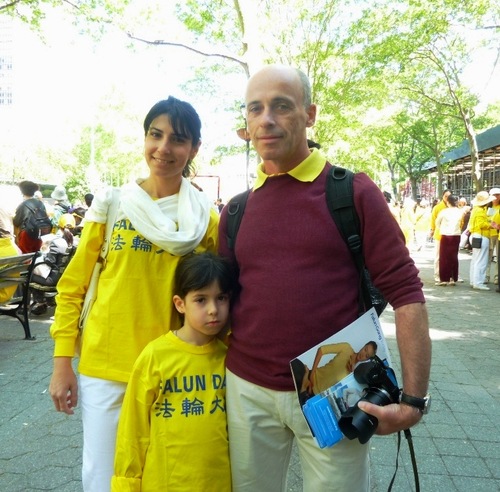 Vadim from Israel began practicing Falun Dafa in late 1998. He learned about Falun Dafa from a website 14 years ago.

Vadim said, “It was not difficult for me to read Zhuan Falun. I'm familiar with the Chinese terms mentioned in the book, and I know the stories behind them. So it felt natural when I obtained Dafa. This owes to my predestined relationship with Dafa.”

Vadim finds Dafa's profound principles of Truthfulness-Compassion-Forbearance beneficial to everybody. Through years of cultivation practice, he has enlightened to more and more things, and after he improved himself physically and mentally through the practice, his friends and relatives have all come to respect Falun Dafa.

After practicing for six months, he found other practitioners. He enjoys studying the Fa and doing the exercises with them. He also works with them to expose the persecution. Vadim works in a big company as a graphic designer. He makes use of his technical skills to publicize the Chinese regime's atrocities and to stop the persecution.

Vadim said that the Jews were severely persecuted during World War II, but the world remained silent, so from a moral perspective, Israel should not remain silent. Several weeks ago, practitioners in Israel held a private screening of the documentary film Free China in parliament. Many MPs and others said they supported Falun Gong and called for an end to the persecution.