(Minghui.org) Seven renowned attorneys in Mainland China were arrested on May 13, 2013 for investigating the persecution of Falun Gong practitioners at the E'erhu Brainwashing Center in Ziyang City, Sichuan Province.

Mr. Jiang and six other attorneys arrived at the brainwashing center at 10 a.m. on May 13, 2013. When they were waiting for the gate to open, a black car without license plates approached them. Two people jumped out of the car claiming that cameras were not allowed in the brainwashing center. They rushed towards the attorneys, grabbed their cell phones and called 610 Office agents.

The arrested attorneys included Jiang Tianyong, Tang Jitian, Liang Xiaojun, Lin Qilei, Guo Haiyue, Zhang Keke, and Tang Tianhao. When attorneys Li Heping, Wang Cheng, Yang Huiwen, and Wen Haibo went to help them, they were also arrested. All eleven attorneys have been released, but not before some of them were beaten.

Although named a “Law Education Center,” E'erhu Brainwashing Center is a vicious place where local 610 Office agents persecute practitioners. Practitioners are often arrested and directly sent and detained there for up to six years. Some have even died as a result of torture. About 260 practitioners were detained there over the Chinese New Year in 2013.

Police attacked and beat the seven attorneys. Mr. Tang Tianhao was beaten the most severely, with bleeding injuries on his head. Mr. Jiang Tianyong's leg was injured. Afterward the police took the seven attorneys to the Yingjie Town Police Station in the Yanjiang District of Ziyang City.

After hearing about this police brutality, attorneys Li Heping, Wang Cheng, Yang Huiwen, and Wen Haibo went to help. Six plainclothes police agents followed them and arrested them in the afternoon.

Wang Cheng, Yang Huiwen, and Wen Haibo were released at 2 a.m. on May 14. The police still held Li Heping, claiming that he had spread “non-factual information” and his case required further investigation. The police threatened to take legal proceedings against him, but did not disclose what actions. These eight attorneys were detained separately and then released at 11 a.m. on May 14. 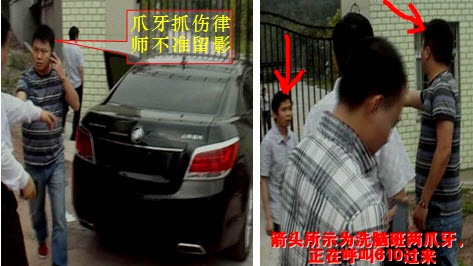 It was reported that Sichuan Province officials ordered the Ziyang City Attorneys' Association to accompany these eleven attorneys to Chengdu City and force them to leave Sichuan Province.

Mr. Wu Yihua, 48 years old, was a medical doctor. Agents from Ziyang 610 Office and Domestic Security Division took him to E'erhu Brainwashing Center on October 12, 2010. Many torture methods were used against him, including physical abuse and deprivation of sleep for long periods of time. He was also pressured to give up his belief and to turn in other practitioners. Brainwashing center head Xiao Hui added drugs to his food and drink that caused damage to his central nervous system and internal organs. This led to high blood pressure associated with kidney failure. Mr. Wu died in pain on December 12, 2011.

Mr. Li Huabin, more than 70 years old, was a practitioner from Xinhe Town, Jianyang City, Sichuan Province. When Mr. Li was informing people about the persecution in August 2011, someone reported him to the police. Agents from the Pingwu Town Police Station, State Security Bureau, and 610 Office arrested him and sent him to the E'erhu Brainwashing Center. After returning home from the brainwashing center in late December 2011, Mr. Li fell into a coma within one month. Medical rescue failed and he died on the afternoon of January 12, 2012. It is believed that he was given poisonous drugs in the E'erhu Brainwashing Center which led to his death.

Ms. Zhao Yuxia, 52 years old, was a former employee at the Ziyang 431 Plant. Ziyang 610 Office agents arrested her on May 9, 2006, and took her to the E'erhu Brainwashing Center. One month later when she returned home, Ms. Zhao's physical health quickly deteriorated. Her entire body was swollen, symptoms of poisoning were apparent in her liver and kidneys. Ms. Zhao died on May 1, 2007.