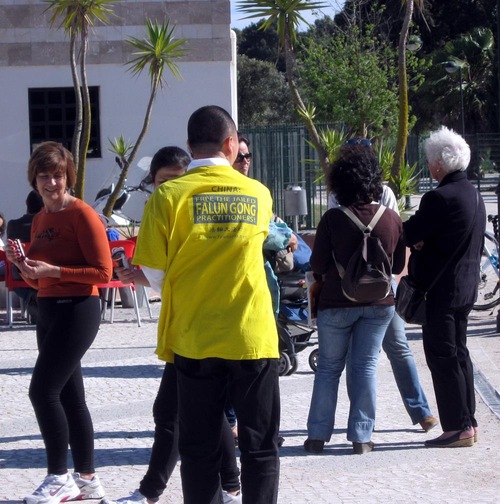 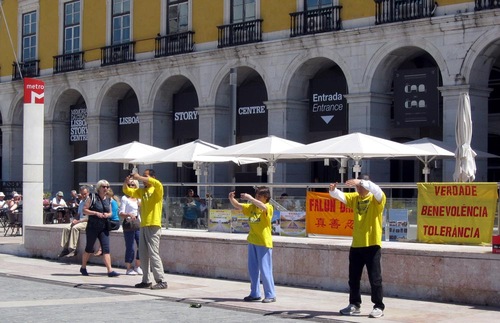 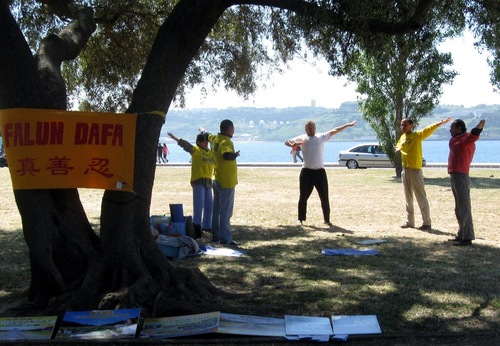 On May 12, practitioners set up display boards and banners in Praca de Comercio Square, a well-known tourist attraction along Tejo Beach in Lisbon. Some demonstrated the exercises while others handed out fliers. Many people stopped to watch the exercise demonstration and learn more.

A lot of people asked, “Is Falun Gong still being persecuted in China?" One cyclist stopped to read the display boards then exclaimed: “It is inconceivable to see a belief, just a belief, being persecuted so cruelly! I heard about the Chinese Communist Party's (CCP) persecution of Falun Gong a few years back, but I thought it had stopped. The communist regime is extremely evil! They have slaughtered so many people whose only goal was to cultivate so that they can become better human beings! The CCP will definitely be punished by God! I wish all of you the best of luck!"

In the afternoon, practitioners moved to Parque de National, a national park in the Oeira district of Lisbon, where they continued to clarify the truth. Many people who received fliers said they were going to read them carefully when they got back home. A lot of young people gathered to watch the practitioners perform the exercises.

On May 13, practitioners gathered near the Lisbon Belem Tower, which is close to the Portugal presidential palace, and continued to hold activities. When some tourists saw the display boards, they exclaimed, "Oh, this is Falun Gong!" One person told a practitioner, "I'm very interested in learning the exercises. Would you teach them to me right now?" After learning some of the movements he said, "I feel terrific! I will come again."

That afternoon, the practitioners went to Parque des Nacoes, a seaside national park, close to where the 1998 Lisbon Expo was held. One young man asked where he could learn the exercises and inquired about the group practice schedule. Some people were very curious about Falun Gong and asked many questions.

At the end of the event, Portugal practitioners expressed their heart-felt gratitude to compassionate Master and reaffirmed their determination to do the three things even better than they did before.

“A New Practitioner Experiences the Benefits of Falun Gong”