New York: Rally in front of UN Exposes Crimes of the Chinese Communist Party and Supports the Millions Who Have Renounced the CCP (Photos)

(Minghui.org) Thousands of Falun Gong practitioners and people from all walks of life gathered on the square in front of the United Nations Headquarters in New York on the afternoon of May 17, 2013. The rally called on the international community to recognize the true nature of the Chinese Communist Party (CCP) and stop the CCP’s brutal persecution of Falun Gong, especially the horrible crime of organ harvesting from living Falun Gong practitioners. The rally also supported the more than 138 million Chinese people who have quit the CCP and its affiliated organizations.

US House Representative Chris Smith sent a letter of greeting to the rally and stated that the fact of millions of practitioners who simply follow the principles of Truthfulness-Compassion-Forbearance being imprisoned in China is not acceptable. He said that recent information shows that the persecution has escalated in China and affirmed that his efforts to expose the Chinese Communist regime’s infringement of human rights will not stop.

A Falun Gong practitioner said that during the past fourteen years the communist regime has used the most base and wicked means to persecute Falun Gong practitioners. As a result, the persecution has damaged the last bit of Chinese traditional culture existing in China. Morality is degrading exponentially and more and more Chinese people have become perplexed and indifferent. 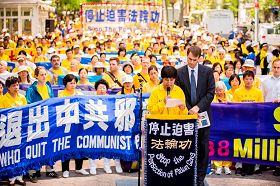 Ms. Ge Lifang from the Grand Coalition of Bullied Chinese said that under the CCP's control, people do not have human dignity. She said that only with the disintegration of the CCP can people in China regain the dignity of human beings. 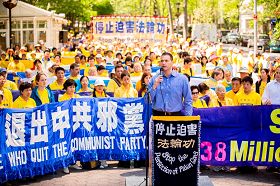 Doctor Damon Noto, spokesman for Doctors against Forced Organ Harvesting, gave a speech at the rally and pointed out that in China, there are many more organ transplants than there are documented donors. This suggests that there is a large, undocumented human “organ bank” that is used to supply organs for transplantation surgeries. It has been confirmed that the increase in transplantation surgeries in China corresponds with the persecution of Falun Gong, when hundreds of thousands of innocent Falun Gong practitioners were arrested or simply disappeared.

Chairman Tang Bojiao of the Chinese Peace Federation said that he feels that the only way the CCP will stop its violence is when it is disintegrated. He said, “More and more people are against control through violence. The scale is becoming larger. One day, if all people stand up [for justice], the communist party will disintegrate.”

Ms. Teresa Chu, spokesperson for the Falun Gong Human Rights Lawyers Group, said at the rally, “The Chinese Communist regime applied to join the UN Human Rights Commission as a standing member. Member countries of the UN should not hold out any hope for the communist regime to change and they should not become accomplice to its crimes against humanity.”

Jeremy Taylor, Director of the Federation of Asian Women's Rights, also spoke at the rally.

While the rally was in progress, more than ten Chinese people renounced their membership in the CCP and its affiliated organizations and received certificates declaring their withdrawals. They held up their certificates happily, rejoicing at having separated themselves from the CCP.