New York: Practitioners Gather in front of Chinese Consulate to Call for the Persecution to End (Photos)

(Minghui.org) On the afternoon of May 17, 2013, Falun Gong practitioners from around the world rallied in front of the Chinese Consulate in New York to protest the nearly 14-year persecution of Falun Gong in China. 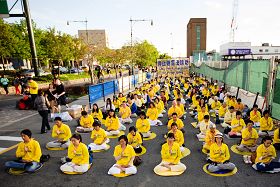 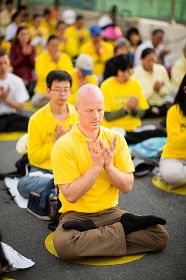 In addition to the large-scale event on this special day in advance of the New York International Fa Conference, Falun Gong practitioners gather in front of the consulate to expose the persecution and spread the facts every day.

Ms. Huang thought that the persecution of Falun Gong was damaging to morality in China and everyone is thus a victim. She truly hopes that more people can see through the lies told by the Communist Party.

Martin from Vienna is an engineer at a well-known telecommunications company in Austria. He and his wife started practicing Falun Gong in 1997. This is the fifth time they've come to New York to participate in the protest. He said he travelled to New York from Europe to help tell the American people about Falun Gong and call for an end to the persecution.

“When Reading Greetings to Teacher, I Noticed Words Do Make a Difference”