(Minghui.org) May 13 is the day Falun Gong practitioners around the world give thanks. Falun Gong, also known as Falun Dafa, was first introduced in Changchun City, China, on May 13, 1992. It is also the birthday of the founder of Falun Gong, Mr. Li Hongzhi. May 13 was declared “World Falun Dafa Day” in 2000, and each year practitioners around the world express their heartfelt gratitude to Master Li, and share the wonders of Falun Dafa with others through various activities and performances. 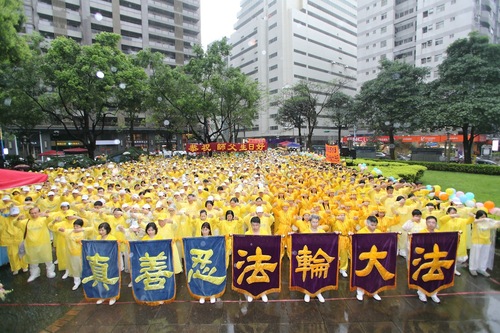 Nearly 1,000 practitioners from Taoyuan, Hsinchu and Miaoli counties, Taiwan, celebrated at the Liuhe Children's Park on May 11, 2013, adjacent to the Chungli business district.

A number of dignitaries were invited to address the participants. Practitioners shared their cultivation experiences and practiced the Falun Gong exercises. They wished Master Li a happy birthday, and sang “Falun Dafa is Good.”

Ms. Ou, the event organizer, said, “I hope the activities will enable more people in the Taoyuan area to learn about Falun Gong.”

After the festivities, the Divine Land Marching Band led a parade through the neighborhood streets. Practitioners lined up in the pouring rain along the sidewalks to demonstrate the exercises, and share the wonders of Falun Dafa. The celebration ended successfully at around six in the evening. 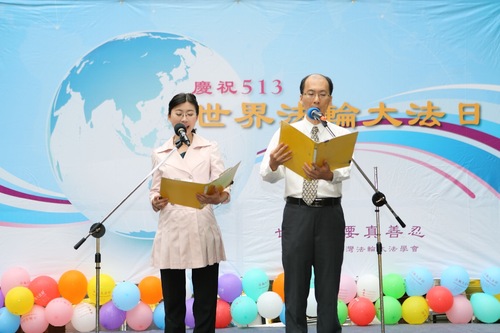 On behalf of practitioners, Wang Chaoming and Cheng Yali express their gratitude to Master through poetry readings. 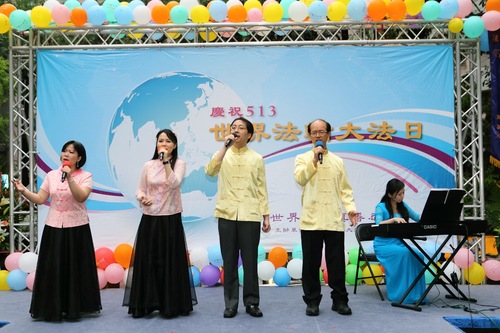 Practitioners sing “Please Listen to Me, Children of Yu the Great” and recite two poems, “Revered Master” and “Remembering Teacher.”

1. Local Government Officials Who Participated in the Celebration Expressed Their Support for Falun Gong 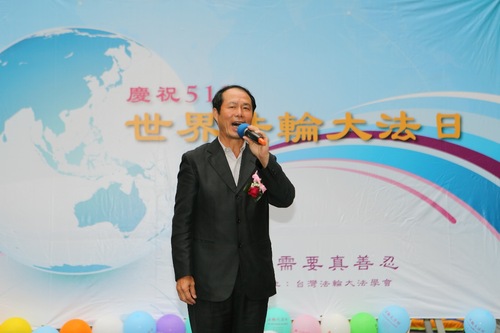 Former legislator Mr. Huang Jenchu said that during his service as a county legislative member, and until he became a legislator in the Legislative Yuan, he was always supportive of Falun Gong. He agrees that the teachings of Falun Gong can improve one's health and help to promote world peace. He admires Falun Gong practitioners for their peaceful resistance in opposing the persecution by the Chinese Communist Party (CCP), and their quest for human rights and the freedom of belief. He thinks such values should be promoted and spread.

Mr. Huang said he was glad to be invited to celebrate Falun Dafa Day. He added, “the rain diminished when the activities began, as if heaven was showing support for Falun Gong.”

With regards to the CCP's obstruction of the ST2 Satellite contract renewal between New Tang Dynasty Television (NTDTV) and Taiwan’s Chunghua Telecom, Mr. Huang said he supports NTDTV. He thinks NTDTV has contributed a great deal to society by being a responsible media and providing quality programming. He urges Taiwan's ruling party to place importance on this matter. 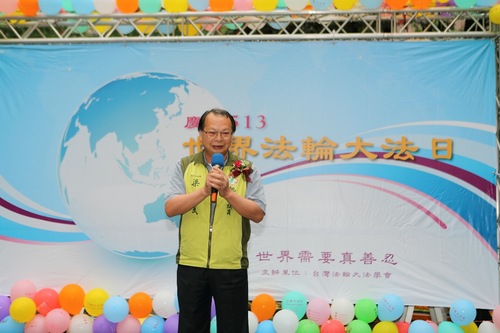 Mr. Liang Hsinwu respects the efforts of Falun Gong practitioners, saying that they have worked very hard to uphold human rights and world peace. He said that he believes the final result will be good. He supports the spirit of the practitioners and would like to make this world a peaceful and better place to live.

Mr. Liang said, “Falun Gong practitioners have good inner qualities and their activities are orderly. Compared with other events organized by various groups in Taiwan, Falun Gong activities are above average and especially meaningful.”

Vice Chairman of the Academy of Social Science, National Taiwan University: "I respect practitioners for spreading the principles of Truthfulness-Compassion-Forbearance" 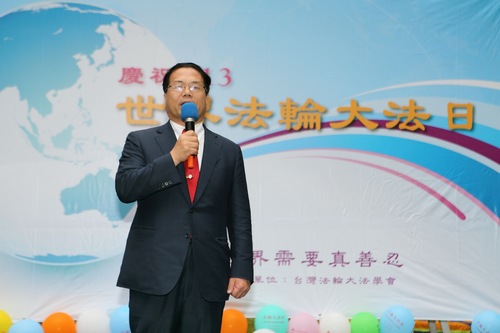 Mr. Chiu Jungchu said he is quite familiar with Falun Gong and praises its practitioners. He often sees practitioners holding various activities on the university campus. He has also seen practitioners in different parts of the world spreading the principles of Truthfulness-Compassion-Forbearance. 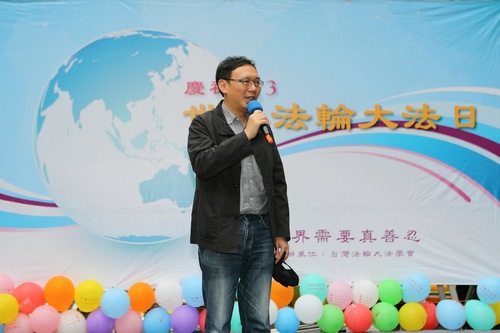 Mr. Huang said that in recent years, Falun Gong has taken an important educational role in Taiwan and the world. The practice teaches people to follow the principles of Truthfulness-Compassion-Forbearance. People have taken it to heart and it has become part of their lives. This is Falun Gong's greatest contribution to society.

Mr. Huang condemned the CCP for illegally persecuting and harvesting organs of practitioners. He thinks their brutal acts should be exposed and the world's people should protest the persecution. From an educator's perspective, he would like to promote the values and the principles of Truthfulness-Compassion-Forbearance. He is willing to stand with practitioners to bring peace and freedom to the world.

He is greatly concerned with NTDTV's ST2 contract renewal issue. He thinks the tendency for the media in Taiwan to favor the CCP is a sign of weakness on the part of the Taiwan government. He urges government officials to stop the media from favoring the CCP and sugar-coating their criminal acts. Protecting NTDTV would allow the people of Taiwan to obtain truthful information. Therefore, he strongly appeals to the government, the representatives, and the people to pay attention to the issue, so that NTDTV can continue to bring truthful information to the world.

Legislative Yuan Senior Adviser, Mr. Chiu Chuichen: "I hope that Falun Gong can spread to every corner of the world" 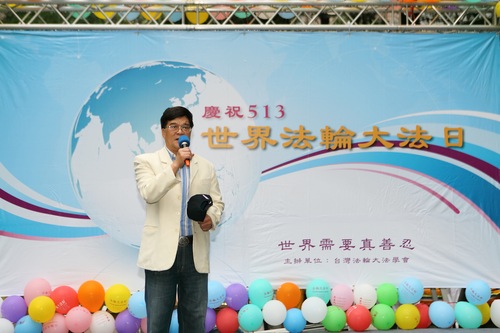 Mr. Chiu Chuichen expressed his admiration of practitioners' spirit to hold the celebration, despite the heavy rain. He thinks the CCP is a phony regime, and the gap between the rich and the poor in China is tremendously wide.

He said the human rights and freedoms of Taiwan's democratic society far exceeded that of the one-party totalitarian system in China. He has read the book Zhuan Falun and cannot fathom why the CCP would want to suppress Falun Gong. The book teaches people to be a good. Mr. Chiu said he has greatly benefited from it and has become more humble.

Falun Gong consists of five sets of exercises. They are simple and easy to learn, and the practice is suitable for people of all ages. Practitioners volunteer to teach the exercises, and charge no fees, nor do they accept any gifts in return. There are about eighty practice sites in Taoyuan. One can find practitioners doing the exercises in the parks and at schools in the morning.

Practitioners have benefited both physically and mentally, and every one of them has a cultivation story to tell. Three practitioners of various ages shared their cultivation experiences on the stage. The following is a summary of their experience sharing. 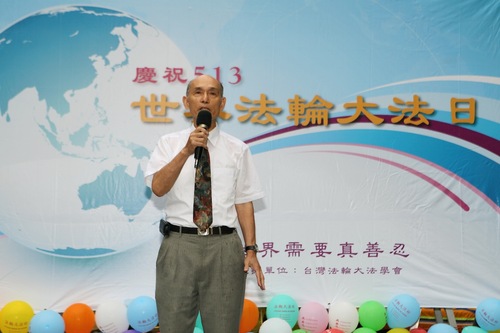 Mr. Chen Hsingnan is seventy-five years old. Twenty years ago, he began experiencing irregular heartbeats, headaches, palpitations, and shortness of breath. For five years, he tried a variety of medical treatments, learned other qigong exercises, and even consulted with psychics, but his health didn't improve. He felt depressed about the situation.

In March 1998, his brother in Canada recommended Falun Gong to him. Mr. Chen bought the book Zhuan Falun and the exercise tapes. His life changed after that. His health improved, and during fifteen years of practice, his temperament has also changed. People around him often speak well of him.

Mr. Chen previously served as the director of a factory. He used to be arrogant and bossy, and treated others harshly when he didn't like what he saw. There were often cars parked in front of his garage blocking the entrance, and Mr. Chen would kick the cars to vent his anger.

After he became a practitioner, Mr. Chen realized he was not kind and didn't think of others first. One day he wrote a note, “There are very few parking spots in the neighborhood. You may park here until eight o'clock in the evening.” The drivers returned the kind favor, and the problem was solved. His wife said he became a different person after practicing Falun Gong.

Falun Gong Brought Me Blessings at Home and at Work 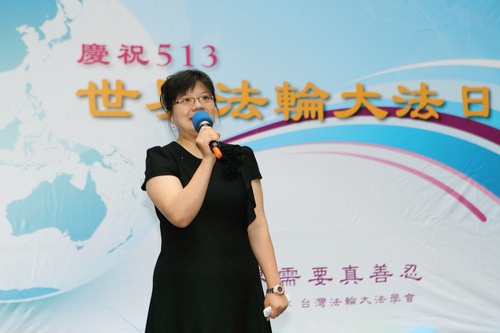 Ms. Lin Hsiangtsen is a high school teacher. She began practicing in 2002, and noticed tremendous changes in her personality and temperament. Consequently, her family and students benefited from her changes. Ms. Lin said that because of Master and Dafa, she feels like a new person and has a happy family. She wishes more people would practice Falun Gong.

Ms. Lin used to be rather self-centered, and had a shrewd, bullying, impatient, and competitive personality. After she learned Falun Gong, she took good care of her home and children. Her mother-in-law was very moved by the change, and her husband was amazed by the transformation. He is very supportive of his wife and their children practicing Falun Dafa. He even drops them off at the practice site and goes home to do the housework.

Ms. Lin is a math teacher. She often incorporates the principles of Truthfulness-Compassion-Forbearance in her teachings. She introduced the Epoch Times newspaper as supplemental reading to guide and shape the students' moral values. The majority of the students in the science classes are boys, and they don't like to clean the classroom. Ms. Lin's students almost always win the weekly medal of “orderliness and cleanliness.” Other teachers often say that her students are polite and their classroom is tidy.

High School Student Learns Falun Gong, and Conducts Herself According to the Principles of Truthfulness-Compassion-Forbearance 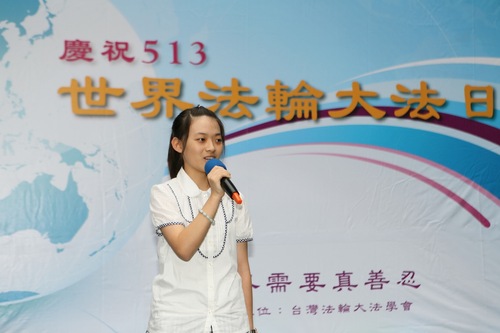 Chen Yuhui is 14 years old and both of her parents practice Falun Gong. She has been doing the exercises and studying the Fa since she was young, and has conducted herself according to the principles of Truthfulness-Compassion-Forbearance. She is an honest student.

One time, Chen told her teacher that the score she received on a test was higher than it should have been, and asked the teacher to change the score. She is kind and often helps her classmates, and speaks to them in a nice tone of voice to calm them down.

In the past, Chen strived to attain the highest score in her class. On one occasion she stayed up late to study for a midterm. When the test results came out, she had scored second, one point lower than the highest score. She thought the incident exposed her attachment to fame. From then on, she reminded herself to study and learn. Subsequently, her test scores are often better than expected and her attitude towards learning is purer!

Chen Yuhui joined the Divine Land Marching Band in 2009. The first time she marched in a parade in the hot sun wearing the parade uniform, she didn't feel well. But she persevered, and marched all the way to the end, because she wanted to tell the Hong Kong residents that “Falun Dafa is good!” After that she didn't participate in a parade for a period of time because she was afraid of hardship. But she knew that Dafa had brought her many wonders in life, and that she should let more people know about it. Therefore, whenever there is an opportunity to play with the marching band, she wants to participate to save more sentient beings. 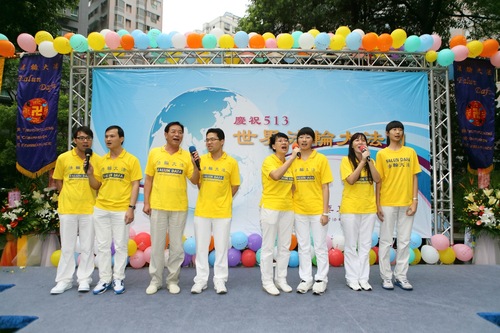 The celebration ended after practitioners wished Master a happy birthday and sang, “Falun Dafa is Good.” The Divine Land Marching Band, the fairy team, the drum team, the exercise demonstration team, the “Falun Dafa is Good” banner team, and the “Introduction to Falun Gong” banner team lined up in an orderly manner, and followed the instruction of the traffic police to make their way onto the neighborhood streets. There were practitioners lined up along the sidewalks to demonstrate the five exercises. Many passersby, including foreign visitors, said they wanted to learn Falun Gong.

Falun Dafa is based on the principles of Truthfulness-Compassion-Forbearance. It emphasizes the cultivation of one's moral character, therefore improving the health of the body and mind. The practice was spread by word of mouth because people realized that they had benefited both physically and mentally, and their moral character had improved after taking up the practice. During the past twenty-one years, Falun Dafa books have been translated into more than 30 languages, and millions of people in more than 100 countries and regions are practicing. Falun Dafa has received 1,795 awards, and government and parliament officials around the world have passed 367 resolutions of support. 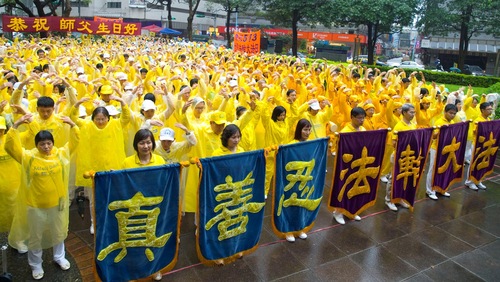 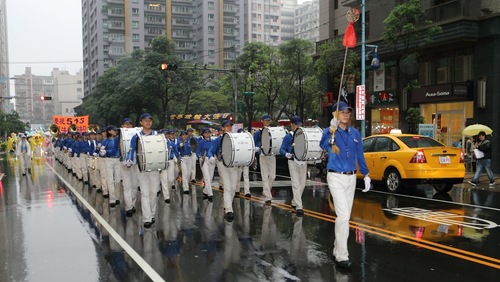 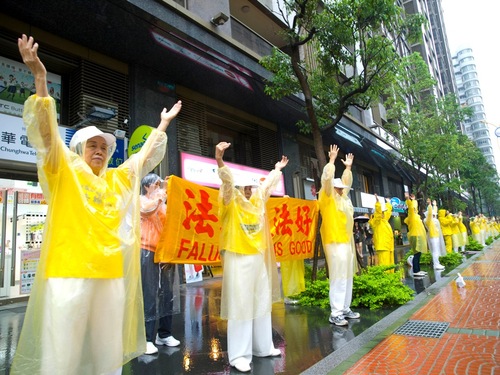 “Magical Encounter in the Detention Center”