Ms. Wang Ping Beaten and Tied Up for Requesting Return of Her Personal Belongings

(Minghui.org) Ms. Wang Ping is a resident of Wuhe County, Bengbu City, Anhui Province. On April 3, 2013, she went to request the return of her confiscated belongings. Shen Shijun, director of the Wuhe County Domestic Security Division, along with his wife, beat and kicked her, tied her up, and placed her upside down on the stairs.

Ms. Wang is a graduate of Anhui Medical University and works at the Wuhe Health and Epidemic Prevention Station. She previously was weak, with several long-term illnesses, and frequently took medicine and had injections. She began practicing Falun Gong in 1998, and followed the principles of Truthfulness-Compassion-Forbearance to become a better person. Her health improved quickly. When she worked as the manager of the Immune Outpatient Department, she worked diligently, and the patients appreciated her kindness.

Ms. Wang has been persecuted these past years because she clarified the truth about Falun Gong. She was twice sentenced to forced labor. On July 1, 2011, police officers from the Wuhe Domestic Security Division, including Guo Baotong and Jiang Sheng, arrested her and sent her to the Anhui Women's Forced Labor Camp, where she was brutally tortured. Others could hear her screams. She was persecuted to the verge of death.

I went to Shen Shijun's home on the morning of April 2, 2012. Shen threw me to the ground and taped my hands behind my back. He then placed me on the stairs upside down and kicked me in the mouth. My three front teeth were loosened. Shen then pulled my coat open and poured water inside, soaking my clothes. He continued to kick my back. A person who later passed by helped me to sit up. When Shen's wife, We Fang, came out, she slapped and kicked me. I was left there until the 110 (police hotline) officers came.

I went to Shen's home again at around 7:00 a.m. the next day and knocked on the door. His wife opened the door and told me to wait, that she would go with me to see the director of the police department. She then shut the door. I knocked again, and Shen opened the door. He threw me down, pulled my hands behind my back, and kneeled on my back so hard I had difficulty breathing. Then he taped my hands behind my back again and slapped me. He also taped my feet and mouth and placed me upside down on the stairs again. I later managed to sit up. When Shen came out again, he kicked my back and slapped me. My nose began bleeding and the blood dripped onto my pants. Shen went back inside. I moved over to the door and knocked with my feet. Shen came out, pushed me down, wiped my bloody nose with tissues, and pulled me back over to the stairs. When he saw me moving toward his door again, he pulled me back to the stairs and taped my hands to the stair rail, leaving me hanging in an precarious position. 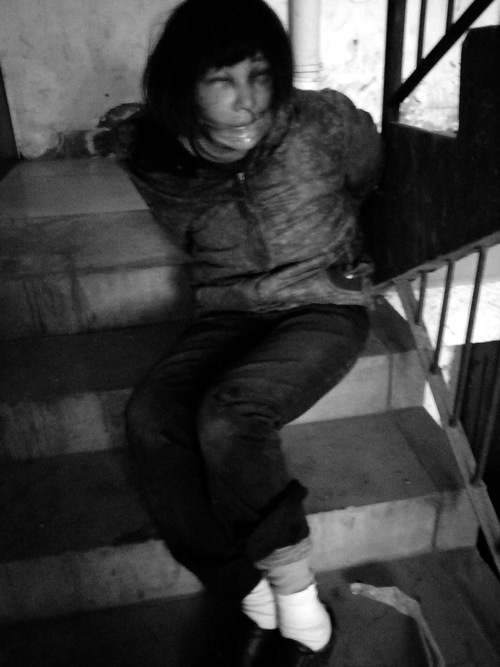 Shen left home at around 8:30 a.m., and his wife left shortly after. I was left on the stairs, and my arms and back were in intense pain. At around 9:00 a.m., two 110 officers came. However they were surprised and told me that this was beyond their jurisdiction and left. At around 9:30 a.m., some patrol officers came and freed me. I was later taken to the police station. I asked the police to file a case report, but they were cold and did not respond. They later reluctantly recorded my statement.

A few days before the 18th National People's Congress in 2012, several police officers from the Wuhe Domestic Security Division, including Guo Baotong, broke into Ms. Wang's home, ransacked it, and confiscated her computer, printer, cellphone, MP3 player, and Falun Gong books. Ms. Wang was taken to a detention center.

After she was released, she went to Guo's and Shen's home every day to request the return of her personal belongings. Her computer, printer, and cellphone were eventually returned to her. She continued to visit them to request the return of her Falun Gong books. She went to their homes and the police station and was often mistreated. She was beaten and had cold water poured on her. She was repeatedly taken to the detention center because of her visits. After she held a hunger strike, she was released a few days later. These visits, arrests, hunger strikes, and releases were repeated several times. The detention center later refused to accept her. For some time Guo and Shen had lived in hotels.

Ms. Wang went to Shen's home again on February 11, 2013, to request the return of her Falun Gong books. Shen and several relatives and neighbors beat her and carried and pulled her downstairs. One of them, a female, fell along the way. A few days later, the Wuhe County Police Station notified Ms. Wang of her crime of intentional injury. They arrested her and took her to the Bengbu No. 2 Detention Center. Ms. Wang held a hunger strike to protest.

“Protesting the Persecution of Falun Gong Should Be Universal”