Doctors Against Forced Organ Harvesting (DAFOH) held a seminar on May 3, 2013, at Leeds University, Yorkshire, North England, to raise awareness about the Chinese regime's crime of live organ harvesting. The regime's large-scale removal of Falun Gong practitioners' organs for profit shocked the public, and people who understood the truth immediately expressed that they would offer whatever help they could to stop such an evil crime. 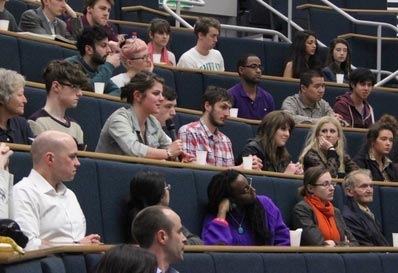 The seminar was held at the largest auditorium at the University, and more than 100 teachers and students attended. The event lasted nearly three hours. During the Q & A portion of the seminar, the audience raised many questions. After the event, some audience members had in-depth conversations with the guest speakers.

There were five guest speakers: David Kilgour, former Canadian senior member of Parliament; Canada's leading international human rights lawyer, David Matas (speeches read); investigative reporter Ethan Gutmann; a member of DAFOH from Germany; and Dr. Li, a medical professor; as well as Falun Gong practitioner Ms. Jane Dai. The speakers drew on their own research results and experiences of many years to expose how the Chinese Communist regime persecutes Falun Gong, and how the regime traffics in Falun Gong practitioners' organs for profit on a large scale and in a systematic manner.

The seminar at the University of Leeds attracted the attention of BBC Radio Leeds Branch, West Yorkshire. After understanding the content and purpose of the seminar, the Branch immediately invited Falun Gong practitioner, Ms. Williamson, to their radio studio for an interview.

On the morning of May 3 the BBC conducted a telephone interview with Mr. Edward McMillan-Scott, an MEP of the Liberal Democratic Party for the Yorkshire and Humber region, and also a deputy Chair of the European Parliament responsible for democracy and human rights issues. The telephone interview was on the BBC Radio Leeds live broadcasts. At the beginning of the program, the presenter reminded the audience that if people would like an organ transplant, they must figure out in advance whether the organ to be received was harvested forcibly. Because in China, some people get organs forcibly harvested that are then sold on the international market.

During his eight-minute interview, Mr. McMillan-Scott first introduced Falun Gong, then spoke about the CCP's brutal persecution of innocent Falun Gong practitioners, as well as his support of the independent investigation of the CCP's live organ harvesting from practitioners.

He said: "This is genocide, and is the persecution of a faith-based group. Falun Gong was introduced to the public over 20 years ago as a school of Buddhist Qigong cultivation method. In 1999, the number of Falun Gong practitioners in China reached 70 million. The then Chinese Communist Party leader Jiang Zemin thought that the number of Falun Gong practitioners was even more than the number of the CCP, so he then launched a brutal persecution against Falun Gong, which is very similar to Hitler's persecution of Jews, leading to hundreds of thousands, even millions of innocent people subjected to imprisonment and torture.

"I personally have been tracking this shocking persecution, especially in 2006 when some information came that Falun Gong practitioners, who do not smoke and drink, had become a source of organ trafficking at military hospitals. According to the research findings from the speakers who attended the event at Leeds University, since 1999, about 40,000 to 60,000 Falun Gong practitioners have been killed with organs removed for profit. In some cases, forced removal occurred even when the practitioners were still alive.

“The Falun Gong group holds a list of over 3,500 people who were tortured to death. A former United Nations correspondent of torture believed that 66% of the people in Chinese labour camps are Falun Gong practitioners, which is a very serious matter. The CCP authorities, of course, try to cover it up, but there are brave people speaking out. I have heard of hundreds of prisoners of conscience who have told me their shocking stories. One of the stories was about a Falun Gong practitioner. The practitioner was taken away a while ago. When people saw him again, he had died on a bed in a prison hospital with his body full of holes and organs removed.

"Another fact was, in prisons only Falun Gong practitioners were forced to have blood, urine, and other tests, while other detainees were not checked. As I said earlier, according to the definition of genocide, it (the persecution of Falun Gong) is indeed genocide."

The BBC reporter asked Mr. McMillan-Scott, apart from being informed and putting more pressure on the CCP, what else could governments do to help. Mr. McMillan-Scott replied that recently some governments, such as Australia and the United States, had passed related legislation, and it is worth learning about.

Public Aims to End the Persecution

In order to invite more teachers and students from the University and the people from surrounding areas to attend the event, and to allow more people to have a better understanding about Falun Gong, UK Falun Gong practitioners launched a week-long campaign to promote the seminar. In addition, by handing out flyers on the street, practitioners got to know many people from all walks of life, such as the national head of a refugee organization, doctors, lawyers, and people from various student organizations.

After understanding the facts about Falun Gong, some people took the initiative to help practitioners to clarify the truth. Some of them quickly reproduced Organ Harvesting videos from Falun Gong practitioners' Facebook sites, and disseminated them among other social groups. There was also a community group who very actively helped to promote the event and wished to help Falun Gong practitioners promote the screening of the documentary film, Free China . A local newspaper advertised the event on its front page. The Department of Political Science, University of Leeds, after learning the truth, listed this event as one of the department's activities, and posted the event advertisement on the home page of the University website. 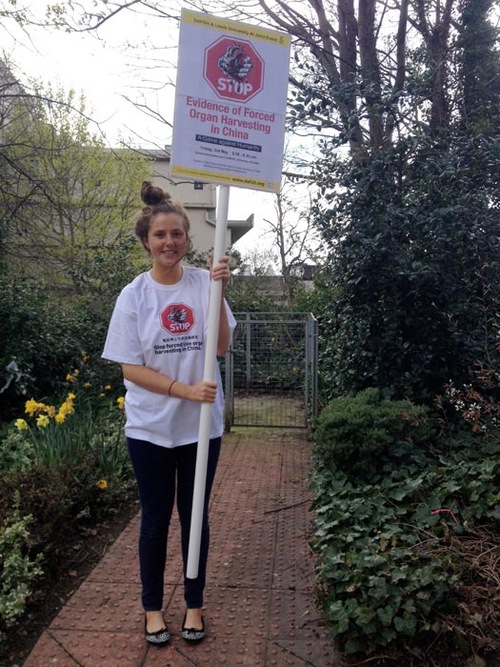 A student from Leeds University holds panels wearing an anti-Organ Harvesting T-shirt, and tells people about the seminar at the University campus

Students from Leeds University, after watching the eight-minute video exposing the live organ harvesting, became actively involved in advocacy. A few students even held panels with messages, wore T-shirts against Organ Harvesting, and walked around the University campus. The effect this had in allowing for more people to learn bout the event was obvious.

A student society coordinator, after learning about Falun Gong, immediately deferred her own activities and focused on promoting the seminar. A staff member of the international relations faculty, after reading the leaflets, asked a Falun Gong practitioner whether this was real. The practitioner did not understand English, but could guess what she meant. The practitioner said, "Yes. It is true." The lady immediately embraced the Falun Gong practitioner and cried. She said that she would tell the news to everyone she knew. A lawyer, after learning the truth, sent an e-mail to the local coordinator and said, "As an educated person, it is my shame that such cruel things are happening. What I can do is to tell everyone I know what is happening in China."

Due to the efforts of those helping to promote the seminar, the seminar was very well received. The audience understood the truth and immediately pledged to take action to stop the persecution.

Priscilla Nsubuga is studying political science and international relations at the University. She was also a key planner of the seminar. She said that the impact imposed by the live organ harvesting almost made her collapse: "When I learned the facts, my stomach felt nauseous and my blood was trembling. It is hard to believe that such a massacre, which is even worse than the Holocaust, is occurring in the twenty-first century."

As for how to help to stop the CCP's crimes of forced organ harvesting of Falun Gong practitioners in China, she mentioned some actions that can be taken immediately. She said: "Use of social media, Twitter, Facebook, so that more people know and participate. The only thing I can do now is to tell people what is happening in China."

In addition, a lot more people thoroughly understood the evil nature of the Chinese Communist Party. Some students even planned to make Falun Gong a research topic.