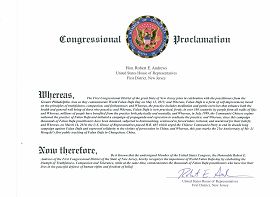 Whereas , the first Congressional District of the great State of New Jersey joins in celebration with the practitioners from the Greater Philadelphia Area as they commemorate World Falun Dafa Day on May 12, 2013; and

Whereas , Falun Dafa is a form of self-improvement, based on the principles of truthfulness, compassion, and forbearance; and

Whereas , the practice includes meditation and gentle exercises that enhance both the health and general well being of who practice; and

Whereas , Falun Dafa is now practiced, freely, in over 100 countries by people from all walks of life; and

Whereas , millions of people have benefited from the practice both physically and mentally; and

Whereas , in July1999, the Communist Chinese regime outlawed the practice of Falun Dafa and initiated a campaign of propaganda and repression to eradicate the practice; and

Whereas , since this campaign thousands of Falun Dafa practitioners have been detained, subjected to brainwashing, sentenced to forced labor, tortured and murdered for their beliefs; and

Whereas , on March 16, 2010, the U. S. House of Representatives passed H. R. 605 which urged the Chinese Communist Party to end its decade long campaign against Falun Dafa and expressed solidarity to the victims of persecution in China; and

Whereas , this year marks the 21st Anniversary of Mr. Li Hongzhi’s first public teaching of Falun Dafa in Changchun, China.

Now Therefore, Be it known that the undersigned Member of the United States Congress, the Honorable Robert E. Andrew of the First Congressional District of the State of New Jersey, hereby recognizing the importance of World Falun Dafa Day by celebrating the triumph of Truthfulness, Compassion and Tolerance, while at the same time, commemorates the thousands of Falun Dafa practitioners who have lost their lives in the peaceful defense of human rights and freedom of belief. 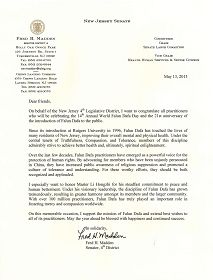 On behalf of the New Jersey 4th Legislative District, I want to congratulate all practitioners who will be celebrating the 14th Annual World Falun Dafa Day and the 21st anniversary of the introduction of Falun Dafa to the public.

Since its introduction at Rutgers University in 1996, Falun Dafa has touched the lives of many residents of New Jersey, improving their overall mental and physical health. Under the central tenets of Truthfulness, Compassion, and Tolerance, members of this discipline admirably strive to achieve better health, and ultimately, spiritual enlightenment.

Over the last few decades, Falun Dafa practitioners have emerged as a powerful voice for the protection of human rights. By advocating for members who have been unjustly persecuted in China, they have increased public awareness of religious suppression and promoted a culture of tolerance and understanding. For these worthy efforts, they should be both recognized and applauded.

I especially want to honor Master Li Hongzhi for his steadfast commitment to promote peace and human betterment. Under his visionary leadership, the discipline of Falun Dafa has grown tremendously, resulting in greater harmony amongst its members and the larger community. With over 100 million practitioners, Falun Dafa has truly played an important role in fostering mercy and compassion worldwide.

On this memorable occasion, I support the mission of Falun Dafa and extend best wishes to all of its practitioners. May the year ahead be blessed with happiness and continued success.