(Minghui.org) On May 8, Falun Gong practitioners in Ottawa celebrated the 21st Anniversary of Falun Dafa's introduction and World Falun Dafa Day in front of Parliament Hill in Canada. In addition to the Canadian Prime Minister and other leaders sending congratulatory letters to the event, nine members of Parliament came to the event and gave speeches to celebrate with practitioners. 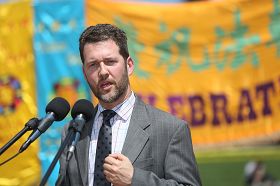 MP Scott Reid said in his speech: “It has been a really long time since I became aware of the issue of the persecution of Falun Gong. All the candidates of all parties have said that we support the rights of Falun Dafa practitioners to practice these peaceful, socially worthwhile, spiritually beneficial practices without persecution.”

“And since that day I've had a chance to see that Members of all Parties have indeed been standing steadfast in trying to do what little we can to help bring freedom and an end to persecution in China.

That’s very encouraging. The motion that was referred to to get Falun Gong practitioners who have family members in Canada out of prisons in China was passed unanimously with every single member of parliament. That gives some idea of the kind of support that exists.

MP Reid said that he is struck by the the unending courage of Falun Gong practitioners. “Falun Gong practitioners back in China who may have been in prison and for years faced such terrible persecution up to and including being murdered for these spiritual practices--what extraordinary courage has been shown? What an extraordinary period of time.”

Finally MP Reid congratulated practitioners. He said: “I think the time will come and will come soon when your government, the government back in China, will learn that this is in fact the Chinese culture being demonstrated to the world – the best way it is being demonstrated to the world by so many people in places like Canada and for those who are back in China being Truthfulness, Compassion and Forbearance.” 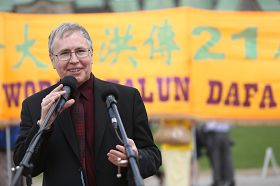 MP Stephen Woodworth is the vice chair of the Parliamentary Friends of Falun Gong. He said: “I stand here in awe and in admiration of your dignity and your perseverance in the face of adversity. And I stand here in common cause with the principles of Falun Dafa: Truthfulness, Compassion, and Forbearance.

As a Member of Parliament for Kitchener Centre, I want you to know that whenever it is necessary to raise a voice in your support, I will be there.

My congratulations to you on the great turnout that you have today and for the ability to arrange for such beautiful weather, and I encourage you to continue to persist, because as Gandhi has said, tyrants and murderers will always arise, but think of it: they will pass away. Every one of them will pass away. Truth and love will endure forever. And that is the hope with which I say that it will not be that much longer that we will realize that hope in China. 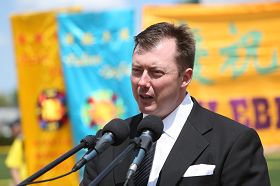 MP Rob Anders believes that Falun Gong practitioners have the courage to tell the truth. He stated: “It always gives me great inspiration and great heart to see you out here. You are one of the largest groups who come to protest here on the front lawn of Parliament.

And it gives me great heart. I think I told this story before, but the first time I ran across the story that Falun Gong practitioners and their suffering under the Chinese communist regime was when I was reading National Review magazine many years ago, and the line that struck me was that just because Falun Gong had more practitioners, followers, supporters than the Communist Party had members, for that reason alone, the Communist Party wanted to crack down and destroy Falun Gong, despite the fact that so many of their own members were practitioners of the movement.

And it is that control, that tyranny, that oppression, that I guess really touches us as we speak to you today.

I tell you this, that brutal regime, with its tyranny, with its force, with its oppression, with its spending more money on internal suppression of people in China than it does on its military and its gunboat diplomacy internationally.

And your perseverance, your strength, your Truth will be instrumental. The suffering that has happened for yourselves and for those others will be absolutely crucial. And so they have you here today showing your strength, your solidarity. It’s so, so very important.

You know, I told this story before but, Aleksandr Solzhenitsyn, who suffered under the Soviet Gulag system of oppression, said that because Ronald Reagan had that courage to call the Soviet Union “an evil empire”--even Pravda, the official propaganda arm of the Soviet Union when they were reporting that could not figure out a way to change that language and quoted “Evil Empire” in Russian.

And he (Aleksandr Solzhenitsyn) and the other dissidents inside those camps tapped it in Morse code with their spoons on the pipes and they cried and they wept, because somebody had the courage to call it what it was. 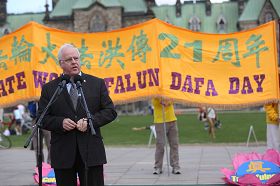 MP Wayne Marston praised Falun Gong practitioners for their peaceful resistance, and said that they are not harmful to any society.

He said: “One of the things I wanted to speak to you about today is before Canada can speak to the human rights issues of the world, and make recommendations to other countries, we have to look inward.

And last week the Universal Periodic Review of Canada was done at the United Nations. And one of the things is that in the year 2002 we had the optional protocol to the Convention Against Torture that the government of the day, the Liberal government, did not ratify and the current one did not ratify. So, before Canada can speak to other countries, it is time for ratification of the Convention against Torture for this country.

This is very, very important because Canada has had a great reputation around the world on human rights.

When they do not stand for human rights in their own country, that would set us back many, many years. 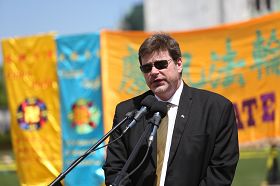 MP Brent Rathgeber is the chair of the Parliamentary Friends of Falun Gong. He has organized many events, calling for support to end the persecution of Falun Gong.

He said: “It is through my involvement with the Parliamentary Friends and my meetings with David Kilgour and David Matas and some others who have studied and written extensively on these issues that I became much more educated and have been able to share that education and that knowledge with other Canadians and to other people internationally.

I really want to salute you for your courage and perseverance, because this has not been a quick battle, but you are winning through your encouragement and through education.  Eventually, I have no doubt that we will celebrate the day when, similar to Canada, you are able to express your freedoms, religious freedom, tolerance – the things you agree with and support, similar to how you enjoy your freedoms in Canada.

I know the day will come when your relatives in China will similarly enjoy this freedom.  So I encourage you for your passion and strength and for your patience.  Keep up the fight for all those things together.” 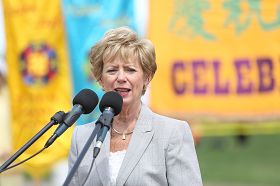 MP Judy Sgro said: “I have raised the issues that you have raised to me – whether it is the persecution of so many, of your friends, your family, your followers.

The organ harvesting which continues in spite of all of the pressures from the United Nations Human Rights Watch.

But progress is happening.  Progress happens slowly and you do have to continue.  So I think my message on behalf of the Liberal Party of Canada and our leader Justin Trudeau is one of hope, determination.

You have heard from the political leaders in Ottawa that our hearts are all with you.

And for all of those in China who continue to fight for freedom, for liberty, for the right to be able to practice in a peaceful way, the fact that you around the world promote peace, not hatred, but love for each other.” 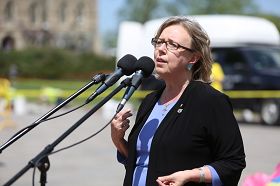 MP Elizabeth May is the leader of the Green Party. She said: “The inhumanity of treating some people as lesser creatures and susceptible to incarceration, to organ harvesting which is an intolerable term and an intolerable practice.

We need to stand strong. Our brothers and sisters together who share one common reality. We are human beings from the same planet.

And that’s why I am so grateful to you as practitioners of something that is about love, and compassion and tolerance and patience and truth.

This is a movement for Truth, for Compassion and Tolerance.

We must stand up against these things.  We must be firm with China, but friends who can tell the truth.  And when a friend who is afraid to tell the truth, they are not friends; they are subjugated by a larger power.  And that’s not friendship.  That’s losing ourselves into it.” 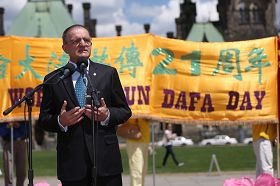 I grew up in a communist country and I understand what it means to live under an oppressive regime.

When the Solidarity Movement started in Poland and the government declared martial law and the army to crush the movement, we went on strike, but we were listening to the radio, we were listening to how the world reacted.  We saw the support in many countries around the world, including in Canada. This gave great encouragement for those that are not afraid to ask for freedom, to ask for their simple human dignity,. 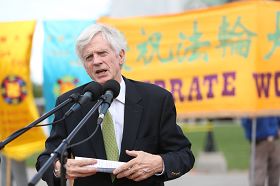 Despite the Party State persecution of Falun Gong for 14 long years, Falun Gong has spread to over 100 countries and gained respect world-wide for its peaceful and dignified campaign to uphold human dignity everywhere in the face of mass murder.

The Falun Gong principles of Truth, Compassion and Forbearance are needed in every country today, including of course, Canada and certainly including China.

Let me close by saying, as you heard a minute ago, I am just back from England, Scotland and Ireland, where a number of us who were sponsored by practitioners (of Falun Dafa), by the Doctors Against Forced Organ Harvesting, were received very, very well by parliamentarians, by academics, by Falun Gong practitioners, of course, and by students.

We have been urging parliamentarians in those places to hold hearings on the question of organ trafficking and I think I am very encouraged that at least Ireland, I believe, is going to do it.  And I am hoping that the Parliament in Great Britain will do it too. We expect to hear quite soon on that.

We spoke to students, to academics and others at Oxford, Cambridge and Leeds Universities. David Matas is a graduate of Oxford, so we were received warmly at Oxford, too.

A tipping point appears to have been reached in Europe following similar public outrage we observed in South Korea, Australia and Taiwan.  Ladies and Gentlemen, I think public opinion is turning on this issue and parliamentarians know that they have to do something.

Here I am telling you about things that are happening elsewhere.  Please keep up with what you are doing in  Canada.  Please keep up contacting Members of Parliament, Members of Council, anybody you think can help us on this issue. I think it is making a difference. Please – I know I am talking to the converted on this – Please all of you do everything you can to add to the growing international campaign to end this crime against humanity ongoing since 2001.”