(Minghui.org) May 13, 2013, is the 21st anniversary of Falun Dafa's public introduction and the birthday of Master Li Hongzhi, the founder of Falun Gong. Falun Gong practitioners in the greater Kaohsiung area had a celebratory parade on May 5. Meinong District leader Hsieh Hao-lin, Kaihsiung City Councilman Lin Fubao, and Qishan District leader Chen Dongpu attended the festivities.

More than 600 practitioners gathered in front of Confucius Temple and said in unison, “Happy Birthday, Master! Falun Dafa is great! Truthfulness-Compassion-Forbearance is great!” 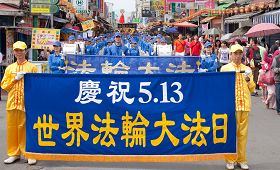 Meinong District leader Hsieh Hao-lin thanked practitioners for bringing peace and blessings to his district. He offered his congratulations on the occasion of Master Li's birthday and on the success of the celebration.

Kaihsiung City Councilman Lin Fubao said, “Falun Gong practitioners have not only gained great health, but have also played a positive role in society.” When talking about the persecution of Falun Gong by the Chinese Communist Party (CCP), Mr. Lin said there was no need to fear the regime. "As long as you are righteous, you will be able to stand firmly. Falun Gong is a great faith. It has nothing to do with politics.” 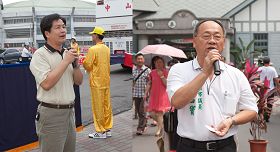 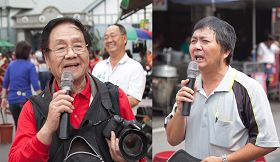 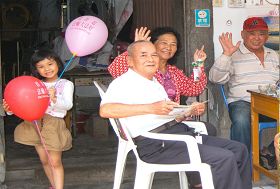 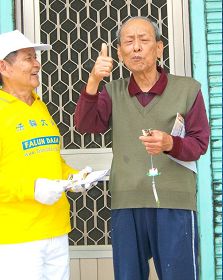 Many people watch the parade and want to learn Falun Gong. 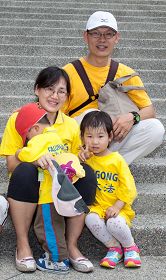 An engineer and teacher couple participate in the celebration with their three children.

Falun Gong practitioners Mrs. Fang Lifen and her husband, Mr. Wu Boxuan, started practicing Falun Gong when they were students. Mrs. Fang said her husband used to be short-tempered and had a bad habit of cursing. He completely changed after he started cultivating himself. He is kind and gentle and helps his parents and his wife with housework. Mrs. Fang also felt true peace in her heart after she started her cultivation. As a busy working mother with three children, she gained great energy from practicing Falun Gong. 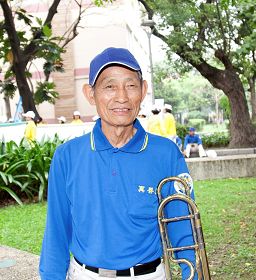 Seventy-eight-year-old retired art teacher Mr. Zhang Qingyi is the oldest member of the Divine Land Marching Band. He used have very poor health. Thanks to Falun Gong, he is now in great health and is eager to help others. For the past few years, Mr. Zhang has called mainland China every day to clarify the facts about Falun Gong. 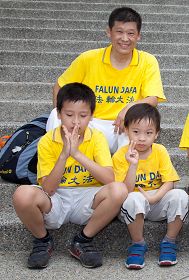 Retired Navy officer Mr. Fan Xuya has been practicing Falun Gong for 12 years. He said, “Thanks to Master's compassionate salvation, my serious gout has improved a lot.” He shared the benefits of Falun Gong with his friends and colleagues. He and his two sons distributed Falun Dafa bookmarks at the event.