(Minghui.org) For the occasion of the 21th anniversary of the introduction of the spiritual practice of Falun Dafa to the public by Mr. Li Hongzhi, Mayor James Brainard of the City of Carmel, Indiana, recently issued a proclamation declaring May 13, 2013 as Falun Dafa Day. Mayor Brainard commended Falun Dafa practitioners’ determination and courage to stand up for Truthfulness-Compassion-Tolerance while facing severe persecution from the Chinese Communist Party. 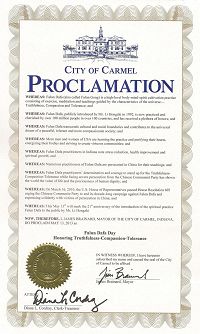 Whereas: Falun Dafa (also called Falun Gong) is a high-level body-mind-spirit cultivation practice consisting of exercise, meditation and teachings guided by the characteristics of the universe—Truthfulness, Compassion, and Tolerance; and

Whereas: Falun Dafa, publicly introduced by Mr. Li Hongzhi in 1992, is now practiced and cherished by over 100 million people in over 100 countries, and has received a plethora of honors; and

Whereas: Falun Dafa transcends cultural and racial boundaries and contributes to the universal dream of a peaceful, tolerant, and more compassionate society; and

Whereas: More men and women of USA are learning the practice and purifying their hearts, energizing their bodies, and striving to create virtuous communities; and

Whereas: Numerous practitioners of Falun Dafa are persecuted in China for their teachings; and

Whereas: Falun Dafa practitioners’ determination and courage to stand up for Truthfulness-Compassion-Tolerance while facing severe persecution from the Chinese Communist Party has shown the world the value of life and the preciousness of human dignity; and

Whereas: On March 16, 2010, the U.S. House of Representatives passed House Resolution 605 urging the Chinese Communist Party to end its decade-long campaign against Falun Dafa and expressing solidarity with victims of persecution in China; and

Whereas: This May 13th will mark the 21th anniversary of the introduction of the spiritual practice Falun Dafa to the public by Mr. Li Hongzhi.

Now, Therefore, I, James Brainard, Mayor of the City of Carmel, Indiana, Do Proclaim May 13, 2013as

In witness whereof, I have hereunto subscribed my name and caused the seal of the City of Carmel to be affixed