(Minghui.org) The award-winning documentary “Free China: The Courage to Believe” was screened at the library of the City of Troy, Michigan, on May 5, 2013. It was the film's fourth screening in the state of Michigan. Local residents and elected officials attended the event. Local Falun Gong practitioners facilitated a Q&A discussion with the audience members following the showing of the film.

“Free China: The Courage to Believe” was released in 2012. The documentary tells the stories of two Falun Gong practitioners who were jailed and persecuted for their belief in the early 2000s. The persecution of Falun Gong is still ongoing in China today. 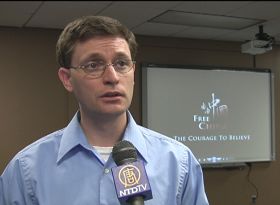 Martin Howrylak, Michigan state senator from District 41, is interviewed by NTD Television at the screening of “Free China: The Courage to Believe.”

After watching the film, Martin Howrylak, Michigan state senator from the District 41, noted that while people always talk about the collapse of the former Soviet Union and other communist governments in Eastern Europe, more than one billion people are still suffering from the tyrant power of the communist regime in China. “Free China” is a great film that exposes the suppression and dictatorship in China, said Mr. Howrylak, clearly showing that people in China don't have the basic freedom to express themselves.

The state senator also said that the United States has a powerful influence on the international affairs, so our government should stand up for justice. The American government has a great tradition of protecting those who've suffered from the totalitarian communist rule, and we should keep it up, he said. He reminded the audience members not to be deceived by the economic development in China, as the Chinese Communist Party is good at blocking information and hiding the truth.

Audrey Zembrzuski, a local resident, said that she would tell her friends that this is a great documentary that tells the truth about China. Ms. Zembrzuski added that she will speak up for those who are being persecuted, because everybody has a right to have freedom of belief.

Frank, another local resident, said that he had known a little about the persecution of Falun Gong in China, but learned much more from the film. He felt lucky to have freedom in America and admired those who fought for freedom in China. Some Americans may think that since the persecution happens in China, it's so far away that we cannot do anything to stop it, noted Frank, but that's not the case. Quoting former U.S. President Ronald Reagan, he noted that freedom is not free, and if nobody is willing to fight for it, we will eventually lose it forever.

From the film, people can see that “we should not just sit there doing nothing,” said Frank. “We should stand up and fight for it [freedom].”

“Free China: The Courage to Believe” has been screened at many international film festivals, receiving six notable awards. It has also been shown at the Capitol Hill in Washington, D.C., as well as at the Parliaments of the European Union, Canada, Japan, and other countries around the globe.