(Minghui.org) Saipan, the capital of Northern Mariana Islands, held its 32nd annual Flame Tree Arts Festival on April 19-21, 2013. The Saipan Falun Dafa Association participated in the event as in previous years. Chinese Canadian artist Ms. Chen Xiaoping also attended the festival, discussing art with members of a local art association, and telling them about the wonderful nature of Falun Gong and about the brutal persecution that Falun Gong practitioners are currently suffering in China.

More than a dozen works displayed were from several artists who practice Falun Gong. Local residents and tourists viewed the exhibition and expressed their appreciation for the artists' exquisite skills. They also felt that the persecution depicted in the paintings was absolutely reprehensible. 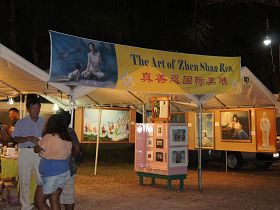 Several foreign visitors carefully viewed the paintings and asked, “Are they real?” It is really unimaginably evil.

Local Falun Gong practitioners told them, “These portray true stories. The artists use paintings to present these stories. Just because this group of people follow Truthfulness-Compassion-Forbearance to be better people, the Chinese Communist Party (CCP) has brutally persecuted them. Tens of thousands of practitioners have been illegally detained, sent to forced labor camps and even died as a result of the severe physical abuse and torture in detention.”

“The live organ harvesting, a girl who lost her parents in the persecution and all kinds of torture methods in prisons—all that is depicted in the paintings is what is truly taking place in today's China.”

The visitors were shocked after learning all this, and signed the petition to express their support for Falun Gong practitioners' efforts to end the persecution.

Among visitors were local Chinese people who were amazed at the high caliber of the paintings. After listening to practitioners' explanation about the origin and meaning of the artworks, they came to understand why the paintings are so realistic and touching.

During the three-day Flame Tree Art Festival, more than 20 Chinese tourists declared their withdrawals from the CCP organizations.