Participants in the march called upon people from all walks of life to work together to stop the persecution.

“Wow! So many people!” and “Magnificent! Spectacular!” were some of the comments heard from Chinese people lined up on both sides of the parade route. One spectator from China said, “It's my first time seeing a Falun Gong parade. I'm quite excited because this can't be seen in Mainland China. Very moving!” 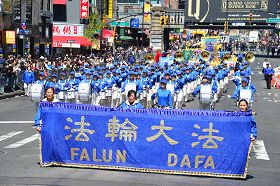 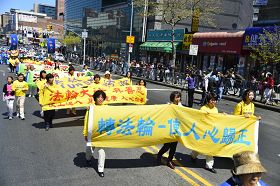 Message on the banner:
Zhuan Falun uplifts the heart and mind 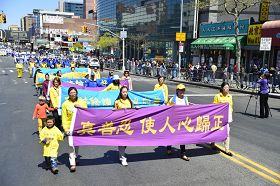 Message on the banner:
Truthfulness-Compassion-Forbearance
uplifts the heart and mind 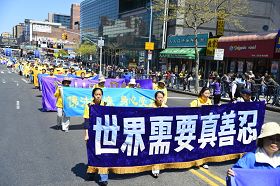 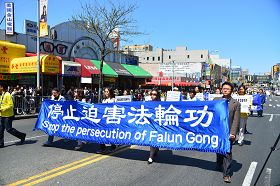 Stop the Persecution of Falun Gong 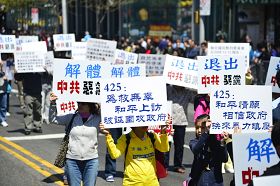 “Falun Dafa Is Great” was the theme for the first section of the parade. The Divine Land Marching Band, made up of nearly 100 Falun Gong practitioners took the lead, playing celebratory songs composed by Falun Dafa practitioners.

A Dragon Dance troupe performed in celebration of Falun Gong's introduction to the public and worldwide spread, while a group of practitioners demonstrated the Falun Gong movements.

The second part of the parade was themed “Disintegrate the Chinese Communist Party and Stop the Persecution.” A large banner reading “Global Quitting the CCP Service Center” carried by practitioners took the lead.

The joyful performance of the waist drum troupe capped off the parade. They celebrated the nearly 140 million courageous Chinese people who have publicly withdrawn from the CCP and its affiliated organizations.

Under the brilliant spring sunshine, Chinese people in Flushing packed the main street of the downtown area as they watched the parade. The continuous efforts of Falun Gong practitioners over the past 14 years, to raise awareness about the persecution, have seen good results. These Chinese people have changed their attitudes, from being confused and fearful to being receptive and appreciative. Many people captured the event with their iPads, iPhones, and cameras.

The grand march in Flushing once again presents the spirit of the April 25 appeal--peacefully and rationally upholding the truth, raising awareness about the brutal persecution, and demonstrating the wonderfulness, compassion, and dignity of Falun Dafa.