(Minghui.org) In an extensive article, Die Zeit newspaper in Germany reports on the Chinese Communist Party's (CCP's) crime of organ harvesting from living Falun Gong practitioners and selling those organs to Western patients for huge profits. Published on March 7, the article has attracted widespread attention.

Die Zeit, the most widely read weekly German newspaper, centered its story around a death row inmate. The article, entitled "Heart On Order" (Herzauf Bestellung), laid out the facts about how Falun Gong practitioners are victims of live organ harvesting. 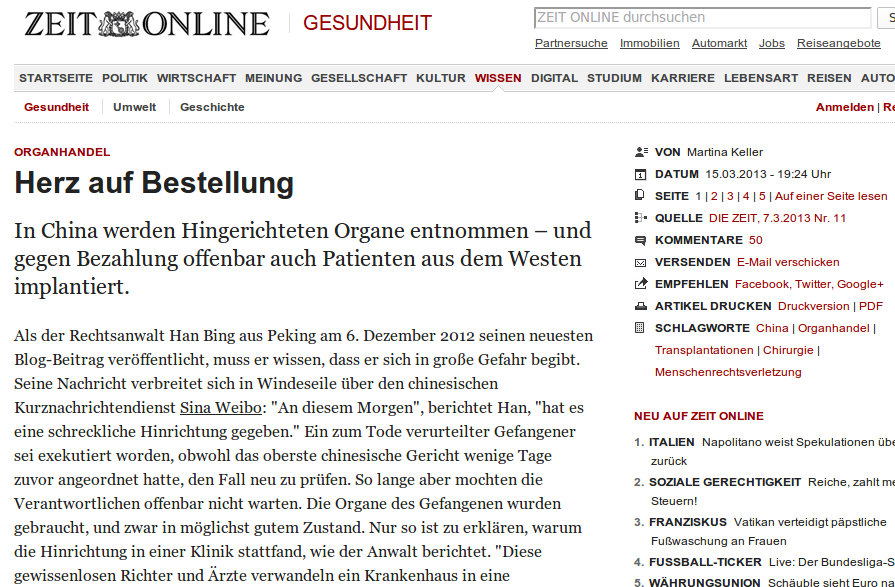 According to the blog of a Beijing lawyer on December 6, 2012, a death row inmate was executed swiftly despite the fact that the High Court had issued a notification to review the case. The prisoner's organs were needed.

To make a profit, the hospital rushed to remove the organs “in their best condition."  "Judges and doctors devoid of conscience turned hospitals into execution grounds, into organ markets," the lawyer protested in the blog. Within one day, the message was forwarded 18,000 times, with half of the respondents leaving comments. The article was then quickly deleted from the Internet.

"A person must die in a timely manner in order to prolong the life of another person, which can only happen under China’s transplant system in the name of progress and money," according to the Times article. It also commented that the CCP had been harvesting organs from prisoners for a long time.

While making money off of Western patients by selling organs obtained from killing, the CCP also implicated Western pharmaceutical companies: "Western pharmaceutical manufacturers introduced immunosuppressants into the Chinese market, and focused on transplant operation research. It is highly likely that the organs used in tests and research had come from executed prisoners.

“Last year due to a series of political scandals, Wang Lijun was sentenced to many years in prison. Wang was the former head of Jinzhou Public Security Bureau and had for many years been in charge of a psychological and forensic institute. For successfully developing a variety of execution methods, he was awarded the prestigious 'Guanghua Innovation Special Contribution Award.'

“In his acceptance speech, he said that he had invented a new organ preservation solution sufficient to preserve without loss the organs of prisoners who were killed with lethal injections.

“He also said at the time that he used the bodies of thousands of people in his 'executions experiment.' This 'heart-wrenching' test result horrified other parts of the world."

The article challenged the Western medical community: "Doctors acted against the ethical standards of their industry. On the thin line between cooperation and collusion, the myriad of entanglement silenced many people involved. The question is:

--How much does morality count?

--How big are the ambitions of medical researchers?

--How much do profits count?

--If Westerners do not want blood on their hands, where is the bottom line?"

The article also mentioned that many Chinese doctors received first-class training in German hospitals and transplant centers: "Chinese physicians get German medical technology, which allows them to harvest organs from executed prisoners in China and carry out human rights abuses.”

63-year-old Mordechai Shtiglits lives with his wife in Petah Tikva, near Israel's second-largest city, Tel Aviv. He had been hospitalized in Sheba Medical Center for a year and a half waiting for a heart to no avail. In 2005, he checked into Shanghai Zhongshan Hospital.

Within a week the surgeon found him a very young heart. It was said that the donor, a 22-year-old man, had died in a car accident.

Die Zeit analysis: “The argument was far from convincing. Even though as many as 60,000 people in China die in traffic accidents each year, doctors could not know in advance which person was about to die from a car accident. Also, to this day the country lacks a central logistics system to quickly assign and transport organs."

With regards to organ sources, the hospital is normally required to note down detailed information on donors or donated organs. But the discharge notice from Zhongshan Hospital had only a few dry lines: admission diagnosis, laboratory values, medication given and recommended taking.

“Everybody in the world despises organ-snatching from executed prisoners.  Transplants were established on the basis of voluntary donations. With prisoners there is no free will, at least according to the definition of the World Medical Association and the International Society of Transplantation. But this is far from the Chinese style of moral corruption.

“If a rich patient needs an organ within a given time, waiting alone for the chance that a suitable donor would be executed in a timely manner is not able to solve his problem. 'The prison authority must purposefully select and inspect the health status of prisoners, including blood type and tissue morphology, and then execute. All these need to happen when the tourist who placed the order is still in China.” Famous New York ethicists Arthur Caplan wrote in State Organs: Transplant Abuse in China in 2012: 'This is basically killing on order!'”

Jakob Lavee was Shtiglits’ doctor, also the chairman of the Department of Cardiac Transplant at Sheba Medical Center. He believed that, as a doctor, of course he’d like for his patients to get the best treatment, but not at any cost, without a bottom line.

According to Die Zeit, Lavee continued to help Shtiglits after he returned from China. The heart expert was sincerely pleased at the progress Shtiglits was making, but at the same time concerned about the extension of life of one person in exchange for the death of another.

A large part of Shtiglits’ heart transplant costs in China were covered by his health insurance company. With Lavee’s persistence and hard work, in 2008 Israel passed a transplant law stipulating that any claim for transplant operations carried out in a country allowing organ trade would not be compensated by medical insurance companies.

Since this law was enacted, essentially no Israeli has flown to China for for an organ transplant. On the Internet, Lavee was cursed as the stumbling block to prevent patients from going to China. “In the face of this accusation, I felt very proud." Lavee said.

Mounting Evidence
From 1999 to 2007, China's organ transplant market developed rapidly. In 2003, the number of organ transplants in China suddenly started to grow exponentially. From 2003 to 2006, there was a boom in organ transplant tourism to China. In 2007, the Chinese regime came up with a regulation prohibiting the sale of organs.

In Germany, the community has been paying a great deal of attention to articles about the CCP’s organ harvesting.

Die Zeit article had its own views on the CCP’s exaggerated cover-ups: "Occasionally, the Chinese regime engages in media-advertised annihilation campaigns: For example, in a stunt in August 2012 the CCP police arrested 137 organ trading suspects, including 18 doctors. Meanwhile, major websites such as chinahealthtoday.com, placidway.com, and novasans.com publicly advertise hospital guides and centers for medical tourism around China. As for the state? It basically left the agencies behind these ads alone."

For the past few years, well-known human rights lawyer David Matas and the former Canadian Secretary of State for Asia-Pacific David Kilgour have been carrying out independent investigations, collecting a large amount of concrete evidence that Falun Gong practitioners are victims of live organ harvesting in China.

The evidence forced the Western media to face the truth: in China, "the state apparatus does not prohibit organ trade."

The Die Zeit article pointed out that the Matas and Kilgour report pinpointed Falun Gong practitioners’ suffering, that they were not sentenced to death, but were executed because their organs suited certain patients.

In their presentation of Falun Gong practitioners’ plight, Matas and Kilgour were conscientiously objective.  They collected evidence from practitioners themselves, such as the different medical tests they were subjected to while incarcerated and information about those that disappeared or whose bodies were found with organs missing.

They interviewed foreign patients who had been to China for kidney or liver transplants. They even interviewed co-conspirators who participated in organ harvesting surgeries.

They also recorded telephone conversations with Chinese mainland transplant centers where investigators posing as patients or relatives of patients asked about the organs of Falun Gong practitioners.

Falun Gong Practitioners Regarded as Most Suitable Organ Donors
Falun Gong practitioners are regarded as the most suitable organ donors because most other criminals are infected with hepatitis B.

A phone call was recorded with Zhongshan Hospital in March 2006, four months after Shtiglits had his heart transplant. The caller wanted to know if one could obtain organs from Falun Gong practitioners. The doctor immediately replied, "We use only their organs here."

The allegations made by the two Canadians were "not only thoroughly investigated but also of great significance," said Manfred Nowak, a professor of international law at the University of Vienna. Until 2010 he was the United Nations’ Special Rapporteur on torture.

He said that a key indicator was the fact that the increase in the number of transplant operations in China coincided exactly with the stepping up of the persecution of Falun Gong practitioners.

Chinese Regime Should Be Required to Disclose True Source of Organs

On behalf of the UN, Mr. Nowak demanded that the Chinese regime disclose the true source of all transplanted organs.  Mr. Nowak said that the CCP denied the condemnation with the usual "propaganda," but never refuted these facts.

Die Zeit also pointed out that the U.S. Congress read Matas and Kilgour's report, including supporting materials. Later, a quarter of the Members of the House signed a letter to the then U.S. Secretary of State Hillary Clinton, asking the State Council to disclose all information on the "appalling organ transplant abuse."

They tested her blood and did an ultrasound scan of all her organs. The doctor also asked her if she had any genetic diseases. There were a total of five or six such examinations, but she was never given the test results.

““Thanks to Falun Dafa, I'm Becoming a Better Person!””