(Minghui.org) Since Falun Dafa (Falun Gong) was introduced to the public in May 1992, it has promoted the fundamental principles of cultivation and of the universe, Truthfulness-Compassion-Forbearance. Those who practice Falun Gong enjoy improved health and character. Falun Gong gained great popularity and quickly spread by word of mouth.

Following the illegal arrest of 45 Falun Gong practitioners by armed police in Tianjin, 10,000 practitioners went to the State Council Appeals Office near Zhongnanhai Compound in Beijing on April 25, 1999, to request their release and an environment in which to cultivate unmolested. That event is known internationally as the “April 25th incident.”

The appeal[gathering in Beijing] was widely reported in the media both in China and overseas. Ten thousand Falun Gong practitioners stood quietly along the street without shouting any slogans. They either read or did the exercises. There was not a bit of trash on the ground when they left. This respectable group of cultivators impressed the world at large, and Falun Gong became a presence on the international stage. Many people in Taiwan took up the practice. 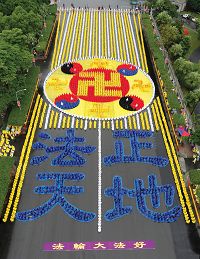 Five thousand Falun Gong practitioners in Taiwan create the characters “Fa Rectifies Heaven and Earth” and the Falun emblem in front of the Presidential Office Building in 2012.

The media in Taiwan reported extensively on the April 25 Appeal the day after. Many people started looking for Falun Gong exercise sites. Some said, “If the Chinese Communist Party doesn't like it, it must be good.” The appeal inspired a large number of people to join the practice. Nine-day lecture workshops in different cities in Taiwan filled up. There were at least 70 people at each workshop. Larger spaces were needed to hold the workshops, and the lectures were played back to back on two TVs.

When Master Li Hongzhi gave a lecture in Taiwan in November 1997, there were only 35 group exercise sites in Taiwan. Two thousand sets of Falun Dafa books were sold within a month in 1998. Fourteen thousand copies of Zhuan Falun were published in April 1999. To meet the growing demand, the publisher printed another 15,000 Falun Dafa books in May 1999.

Falun Gong spread by word of mouth. People from all walks of life--professors, doctors, attorneys, engineers, government employees, police officers, soldiers, farmers, businessmen, students, and housewives--have all benefited from this great cultivation practice. Taiwanese became the second largest group of Falun Gong practitioners. The government and society in general have high praise for Falun Gong's health benefits and improvement in morality. Today more than 1,000 group exercise sites are located in more than 300 cities and towns in Taiwan.

Miracles at the Nine-Day Lectures

Attorney Chu recounted how she was impressed by the fact that 10,000 Falun Gong practitioners hadn't left any trash behind. She thought Falun Gong must be something extraordinary. She made phone calls to find out where to learn it. She had been diagnosed with cervical cancer and was getting her final affairs in order. But her cancer was miraculously cured after she attended the nine-day lecture workshop.

A Taiwanese businessman happened to visit mainland China in 1999 and witnessed how Falun Gong was being slandered on the TV news. He was surprised that the government of such a large country would suppress a cultivation practice. After returning to Taiwan, he went to a nine-day lecture workshop just out of curiosity. He discovered that Falun Gong taught people to be good. There was nothing bad about it. The CCP was fooling people. His insomnia, which he had suffered for 17 years, was gone after the fourth lecture.

Many Falun Gong practitioners in Taiwan shared the same experience. They heard about Falun Gong from the media coverage of the April 25 Appeal and were inspired to find out about the practice.

The CCP launched a brutal persecution of Falun Gong three months after the April 25th Appeal. In the past 14 years, Falun Gong practitioners have continued to clarify the facts to the international community. More and more people have learned the truth. Falun Gong has been embraced in more than 100 countries around the world. One hundred million people have benefited from this great cultivation practice.