After learning the truth about the persecution and the appeal, many tourists from mainland China proactively declared their withdrawal from the Chinese Communist Party (CCP) and its affiliated organisations. 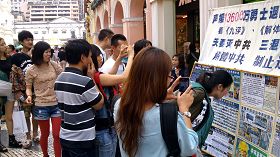 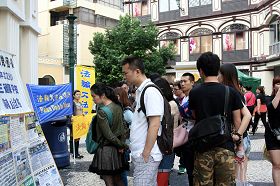 Some practitioners were holding big banners with the words “Falun Dafa is Good,” “Commemorating the 14th Anniversary of the Peaceful April 25 Appeal,” “Falun Dafa in Macao,” etc. There were also display boards showing pictures of Falun Dafa around the world.

The event attracted many passers-by. They picked up newspapers and informational DVDs, and also took photos of the display boards. Some tourists said, “I am really shocked. It's so good that people in Macao enjoy freedom of speech.” Some read out the words on the banner: Falun Dafa is Good.

There happened to be another parade activity on the same day. When the contingents of the parade walked past the event area, those in the parade also kept turning their heads to see the big banners held by Falun Gong practitioners.

One local resident said, “I know about the peaceful April 25 Appeal.” When practitioners told him to remember “Falun Dafa is good,” he replied, “Yes, I know.”

One young man from Zhuhai, Guangdong Province, said, “Each time I get my travel documents done, I come to Macao for truth-clarification materials.” He has already withdrawn from the CCP organisations and really enjoys watching NTDTV, which he can access by using software that circumvents the CCP Internet censorship. Practitioners gave him a new version of software that allows him to access blocked websites. He was very pleased and very grateful.

There were some tourists from Henan Province. While they were squatting down to look at pictures laid on the ground, practitioners asked them, “Is this the first time you have come to Macao?” They said, “Yes, and this is the first time we've see such a scene, very soul-stirring.”

When practitioners asked them if they knew about the April 25 Appeal and if they had joined the CCP Youth League in the past, they said no. But after practitioners told them about the peaceful April 25 Appeal and the reason for quitting the CCP organisations, they all declared their resignation from the Chinese Communist Youth League and Young Pioneers. They also took truth-clarification materials and copies of software to break through the CCP Internet censorship.

Falun Dafa practitioners around the world have held activities to commemorate the peaceful April 25 Appeal every year since 1999, and peacefully raise awareness about the persecution. They help people from mainland China who have been deceived by lies to see through the nature of the CCP.

For 14 years, Falun Gong practitioners in mainland China and around the world have been continuously clarifying the facts about Falun Gong to people all over the world.