(Minghui.org) On March 10, 2013, Falun Dafa practitioner Reiko Nishimura protested in front of the Chinese Consulate in Nagoya, appealing to the Japanese government and society at large to help rescue her mother, who is illegally jailed in China. Her appeal received wide support from the public. Local newspaper Chunichi Shimbun reported on the protest. 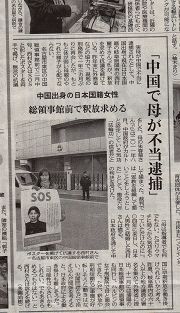 Ms. Chunju Zhu, Ms. Nishimura's mother, is a villager from Tianmen Township, Fangzheng County, Harbin City, Heilongjiang Province. On August 16, 2011, she was arrested for practicing Falun Gong. On November 3 of the same year, she was sentenced to six years in prison. She is being held in Harbin Women’s Prison.

In 2012, with help from elected officials, Amnesty International, and local organizations, and with assistance from the Ministry of Foreign Affairs, Ms. Reiko Nishimura traveled to China and visited her mother. Ms. Chunju Zhu looked very old and tired and was forced to pack toothpicks in the prison for long hours. Ms. Nishimura said that her mother is only 60. The family can't celebrate her birthday, nor can they pass on any greetings to her. Her elderly father is home alone and lives a hard life.