Members of European Parliament Speak Out for Justice for Falun Gong

(Minghui.org) Free China:The Courage to Believe is a 2012 documentary about the persecution of Falun Gong. Directed by Michael Perlman, the film tells the stories of two Falun Gong practitioners who were jailed and persecuted for their belief.

Free China is the winner of many film festivals, including American INSIGHT's 2012 Free Speech Film Festival and WorldFest's 2012 Film Festival.

It has been screened at many international film festivals and the Houses of Parliament and Congresses of many countries, including the United States, the Canada, Japan, and Sweden, as well as throughout the European Union. 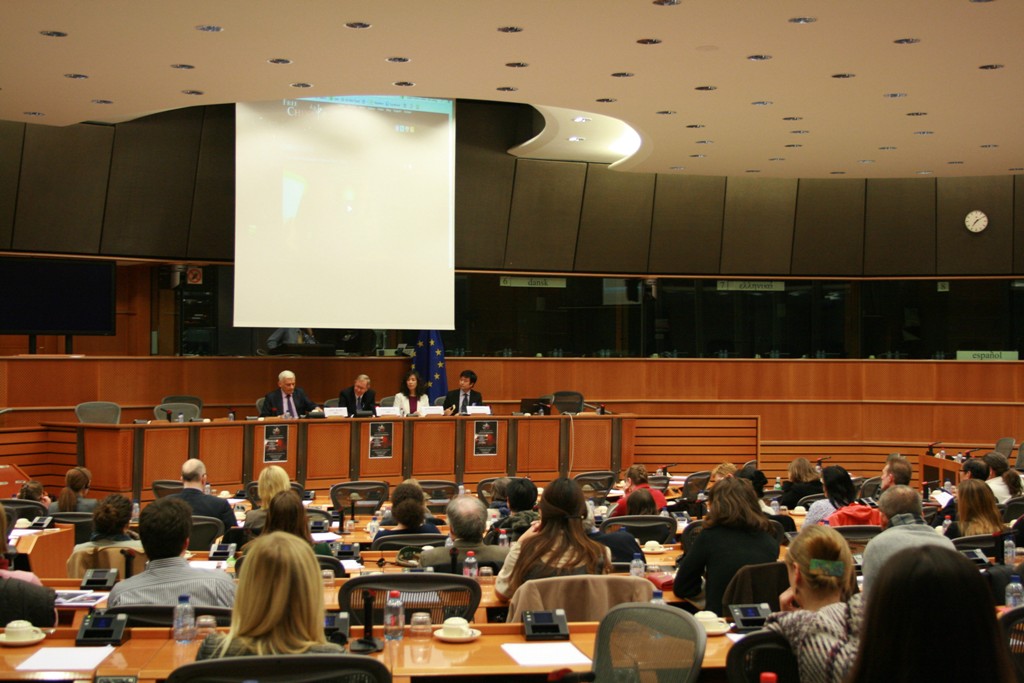 The documentary film Free China: The Courage to Believe was
shown at the Conference Hall of the European Parliament

The audience for the screening included MEPs from EU member countries, members of staff from three major EU institutions, representatives from non-governmental organizations, and other dignitaries.

The film reveals the horrible truth of the persecution in China at the hands of the Chinese Communist Party. It shows the power of belief, and urges the audience to support justice.

We Should Not Forget the Past; Support Justice and Stop the Persecution 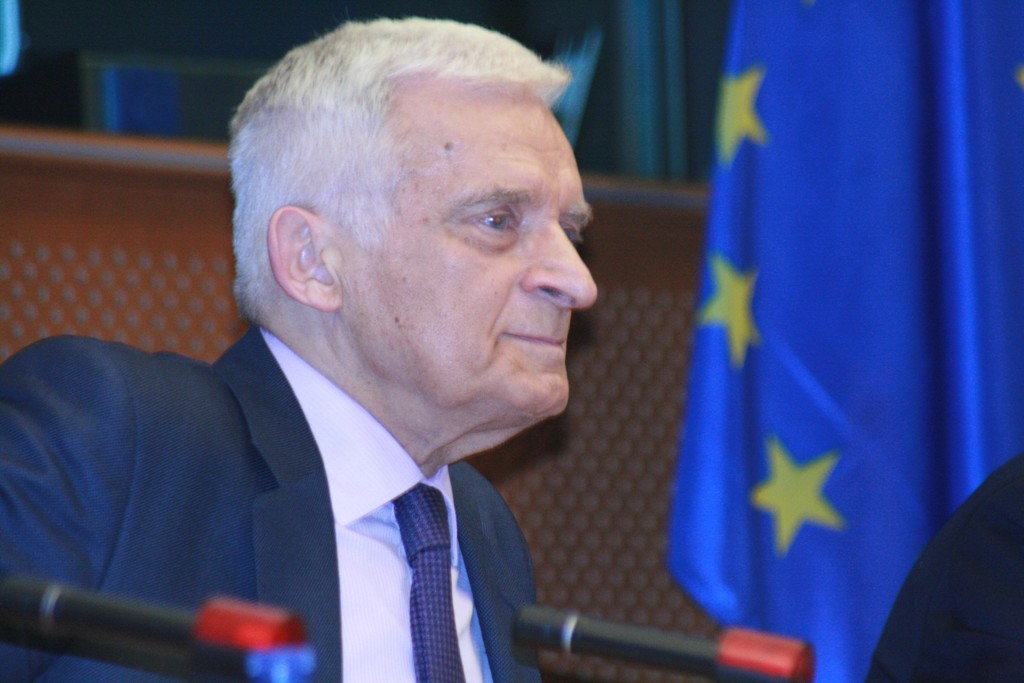 Prof. Jerzy Buzek is from Poland, a formerly communist country. In his speech at the ceremony before the screening, he said: "I still remember in our country, in the days of the communist regime, how difficult it was for us to believe, to show that we believe and to practice our belief. Thanks to all of you, we can see a picture of the reality of China." 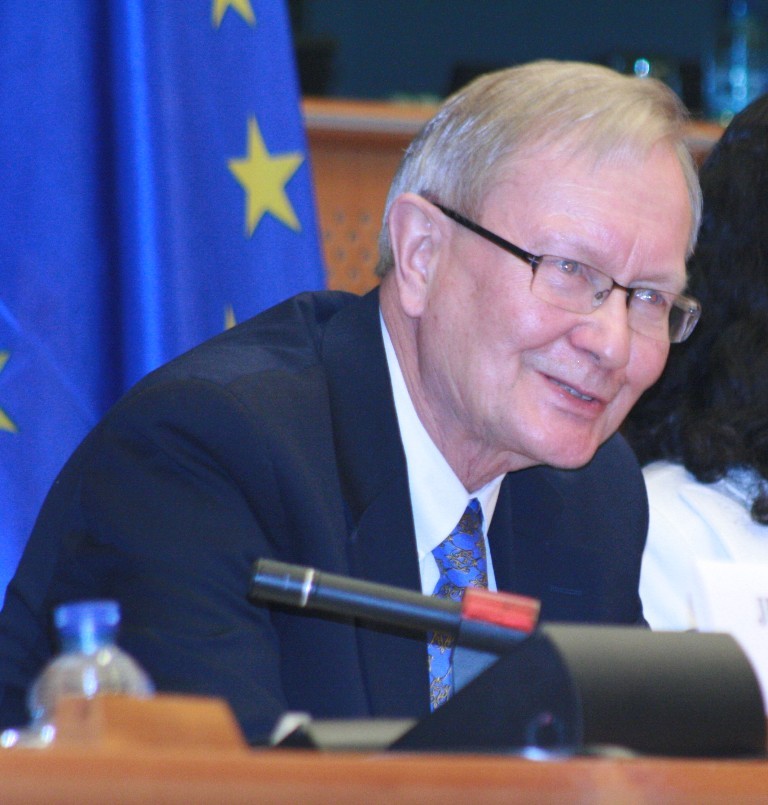 Mr. Tunne Kelam, MEP, one of the screening sponsors, said: "We are from a formerly totalitarian country. We know what it means to try to live according to your belief. Having joined free Europe, it is our duty today to show solidarity with the millions of individuals who lack this freedom, so that they have this possibility to do what they feel to be right."

Ana Gomes, an MEP from Portugal, said: "We absolutely understand the values that the Falun Gong practitioners espouse. They are our values. They are the values of every human being, that we Europeans often take for granted, but we have to fight for them to be considered now our basic principles and to be actually universal values.”

"Those who practice their beliefs deserve our respect and support. We must remember all of us have lots of things to do in China and many other places all over the world. Now we need not only the courage to believe, the courage to practice, but also the courage to act in an organized way."

Mr. Tunne Kelam has seen Free China three times. He said that every time he watched it, he had a deeper understanding: "I think it’s so important for the MEPs and the staff to know more, to raise awareness about the real situation in China.”

“We’re dealing with China in our resolutions.” he said, “but still, to know the truth, which can be very horrible sometimes, is our mission as representatives of the European nations. And I think the truth is also realizing with whom we are dealing.

“If they are dictators, if there is a dictatorship, despite the economic progress and growing might of China, we should call it a dictatorship and treat is as such. That is, not letting economic interests be more important than our concerns and our official values of caring about human rights and the rule of law."

MEP Kelam stressed: "No one in a dictatorship can be absolutely self-supportive. Falun Gong practitioners need some sympathy, some support from others. This is a key element… how we can influence the situation there for the better. Because if the Western nations really care about their own values then they will apply more pressure."

A member of the Rotary Club of Thailand spoke about his understanding of the film: "It breaks my heart, it is my duty to give a big hand, not only to you, but to everyone, for doing the right thing."

MEP Gomes said: "Seeing this in Europe, it's important to understand that we have to support those who fight for basic freedoms—namely, the freedom of belief, and for the values that Falun Gong practitioners want to spread around, tolerance, peace and compassion."

Professor Jerzy Buzek added: "It is our obligation, our responsibility to remember that and to help all of them from China in this great fight against that totalitarian system."

A Reflection Invoked by the Documentary

After seeing the film, MEP Gomes said: "It makes me wonder: what is the CCP afraid of? Regarding the practitioners of Falun Gong, what are they afraid of? The fact that they repress Falun Gong shows they are unsure about their capacity to impose their views, about the strength of their convictions, about the appeal of their own theories in the face of such a peaceful and common sense practice like Falun Gong.”

MEP Kelam said: "I think people from the West need first of all to realize where many products from China come. It is slave labor and we often don’t care about it."

Mr. Buzek said: "The independent Chinese vision is important for all of us to bring the reality of today's China to the EU, and also from the free world, to the democratic world and to Chinese citizens.

“And on the other hand, the film is so important for all of us, because sometimes we don't remember what it means to live in a free democratic country, with freedom of expression, and such a film brings back our memory, especially for we who are from central and eastern Europe.”

It's Crucial to Clarify the Truth and Expose the Lies

MEP Gomes said that it’s very important for Westerners to see the film, because the CCP has not only been spreading lies and slandering Falun Gong in China, it has done the same to Westerners.

“It’s very important then to explain the truth, and to expose the kinds of things they are doing to the people that decide to practice Falun Gong, and to expose in particular the kind of abuse and gross human rights violations that are imposed on Falun Gong practitioners in China.”

MEP Kelam shared the same view: "My understanding is deepening. It's worthwhile. I would suggest that everybody take the time to look at this film two or three times. It’s been very instructional and useful for me, and I hope for others too."

“A Reflection on the Minghui Editorial, “Put an End to Plagiarizing and Undermining the Fa””