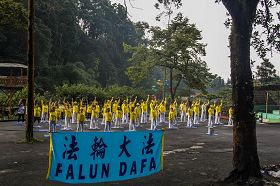 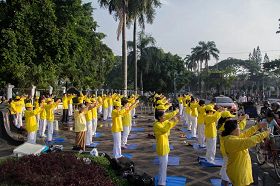 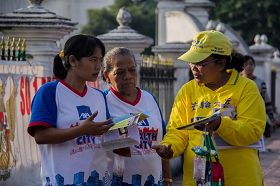 Explaining the facts of Falun Gong to passersby 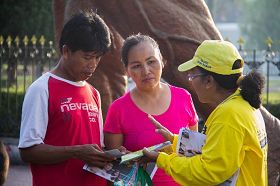 Explaining the facts of Falun Gong to passersby

Several new practitioners attended and were touched by the sharings. They said they felt the strong energy field during group study.

A new practitioner from Purwokerto shared that his health had improved significantly after he started practicing Falun Gong. He had previously been unable to walk one hundred meters continuously, and had to take frequent breaks before moving on. He now feels energized. He shared that as a local known public figure, he had participated in many large social and political organizations, but he felt that only among Falun Gong practitioners did he find a “pure place.”

A new practitioner from Pemalang said he previously had diabetes, and experienced a big improvement two weeks after beginning Falun Gong practice. Another new practitioner shared about how he had survived from a third stroke after reading Zhuan Falun and practicing Falun Gong. Though initially he could not stand after the stroke, he sat and practiced the meditation exercise. He can now practice all five Falun Gong exercise sets.

Some veteran practitioners shared that they benefited from the three-day group event, and felt encouraged to practice diligently.

“Germany: Spreading Dafa and Exposing the Persecution in Offenburg ”

“Remembering When Master Purified My Body”