(Minghui.org) On February 22, 2013, the Danish Parliament held a debate titled ‘Communist China's Judicial Situation’. This debate was initiated by Soren Espersen—a senior parliamentary member, vice president of the Danish People’s Party and spokesperson for the Danish People’s Party. It was to discuss the current human rights problem in China and to question the foreign minister in regards to the Chinese Communist Party's (CCP's) live organ harvesting of Falun Gong practitioners. 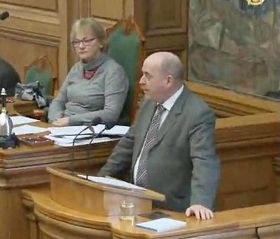 The Danish foreign minister and foreign policy spokespersons from eight other parties participated and spoke in this debate. On February 26, over 100 parliamentary members voted on the debate proposal.

Mr. Espersen pointed out in the debate: “Regarding what is happening in China, as the Foreign Minister has said, we don’t have the exact numbers. But according to the latest information from Amnesty International, in China there are over 5 million prisoners, including political dissidents, church ministers, lawyers, Falun Gong practitioners, Christians, and Tibetans. They are spread throughout over 1,400 labour camps. Some camps form their own trading companies to openly exploit prisoners’ free labour to make money. What is worse is that the crime of live organ harvesting is carried out there.Whatever the organs or blood types, they can provide their buyers with exactly what is needed and make a huge profit from the organ sale.”

The Danish Red and Green Union Party’s external affairs spokesperson Nikolaj Villusen said: “Today’s debate is very meaningful. In Denmark, we have a very common agreement on human rights. Almost all parties agree that human rights are fundamentally important. Therefore, we need to speak for those who are still fighting for their human rights in their own countries.”

Parliamentary members raised seven issues regarding the CCP’s record of human rights violations. This was the first time that the Danish parliament held a special debate on the Chinese human rights situation. The debate was broadcast live.

On February 26, parliamentary members voted on the proposal raised together by six parties in the debate. The proposal was passed with the majority of votes coming from more than 100 members. The proposal reads: “The Danish parliament has debated the Chinese human rights problem and calls on the Chinese government to work towards improving its human rights situation. The Danish parliament is also aware of the recommendations given by the UN human rights senior officials and EU senior representatives to address current Chinese human rights violations, including no freedom of speech and unfair treatment of minority groups.”

This is the first time that the Danish government has, in its own parliament, officially acknowledged the CCP’s live organ harvesting.

When interviewed by media, Soren Espersen commented: “I think as a country we should get our focus right. China is controlled by a communist dictatorship which is still prosecuting and victimizing Tibetans and Falun Gong practitioners. We shouldn’t just think of trade with China and ignore its human rights problems.”

The CCP’s Crime of Live Organ Harvesting Gets Exposed

Before this debate, Danish parliamentary members had already started to notice the crimes the CCP was committing in China. In October 2012, Peter Skaarup, vice president of the People’s Party, questioned Danish Foreign Minister on the issue of the CCP’s live organ harvesting of Falun Gong practitioners.

In an official letter to the Foreign Minister, Mr. Skaarup asked: “A series of evidence is pointing to the CCP’s crime of removing organs from live Falun Gong practitioners, which has been exposed in US Congressional Hearings. What actions will the Foreign Minister take regarding this crime?”

He also asked: “Has the Health Minister read the information released by the US Congress Foreign Affairs Committee about the Chinese government's harvesting of vital organs from living political dissidents? Do any Danish companies have business relations with those Chinese companies who participate in such organ transplants and related research?”

Echoing the questioning of the Foreign Minister by Peter Skaarup, vice president of the People’s Party, the Danish public is calling for a complete stop of forced organ harvesting. Over 80,000 citizens, including many parliamentary members, have signed the petition to stop this crime in China.

The petition is organized by Doctors Against Forced Organ Harvesting (DAFOH), an international non-governmental organization, as well as the Non-violence Progressive Party. The petition began on October 6, 2012 and is calling for the UN to send an independent team to China to investigate live organ harvesting of Falun Gong practitioners.

As of November 22, within one and a half months, over 166,461 people from 36 countries had signed this petition.