(Minghui.org) Falun Gong practitioner Ms. Zhang Fuying was arrested and taken to the Xili Brainwashing Center in November 2012, for distributing truth-clarification materials. She developed a serious illness during the illegal detention and her entire body was swollen. She died three months later after she was released. 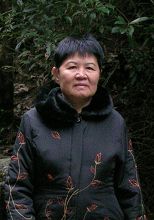 Ms. Zhang, 66, was a retired hospital employee. After the Chinese Communist Party started the persecution of Falun Gong in July 1999, Ms. Zhang was arrested several times because of her belief. She was taken to the Sanshui Women's Forced Labor Camp in 2001 to serve a forced labor term of two years and two months. She was also detained at the Xili Brainwashing Center three times.

While incarcerated at the Sanshui Forced Labor Camp, Ms. Zhang was forced to undergo brainwashing sessions. Because she refused to “transform”, the camp guards escalated the persecution and locked her in solitary confinement. The walls were covered with posters that slandered Falun Gong. The guards kept playing videos that viciously slandered Falun Gong from morning to night. Ms. Zhang was deprived of sleep and had two personnel watching her around the clock. The camp personnel had “conversations” with her every day and tried to force her to renounce Falun Gong.

Ms. Zhang was reported and arrested on the afternoon of November 8, 2012, while distributing truth-clarification materials with another practitioner, Ms. Gao Shuhua. She was taken to the Xili Brainwashing Center. She became seriously ill, her body was swollen all over, and her abdomen was full of fluid. She was sent home on December 29, 2012. She died at 10:00 p.m. on February 18, 2013.

Prior to her practicing Falun Gong, Ms. Zhang had many illnesses, including chronic arthritis, rheumatism, nervous breakdown, calcifying lung, pharyngitis, and low blood pressure. She was taking medication all the time. She often got injections and massages, but to no avail. She started to practice Falun Gong in 1998. Her illnesses disappeared shortly after and she became healthy.