(Minghui.org) The New South Wales Parliament discussed a petition “calling for legislation to take action to stop the persecution of Falun Gong and end collaboration on organ transplantation between New South Wales and China” on the afternoon of February 28, 2013.

This topic was proposed by Jamie Parker, Greens MP for Balmain in NSW Parliament, and was discussed that same day. Mr. Parker submitted the petition, which has more than 10,000 signatures, to Parliament. 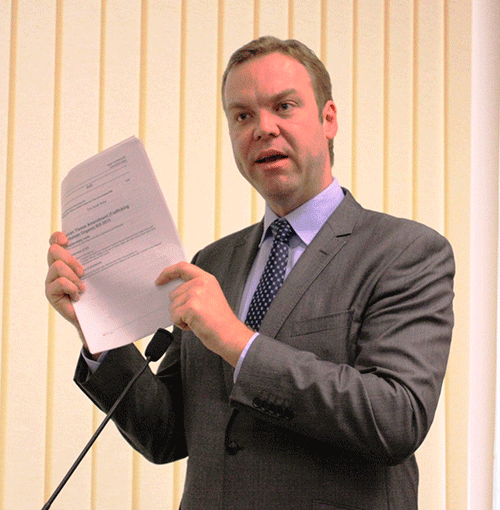 Mr. Parker put forward a draft bill that includes sanctions against forced live organ harvesting, preventing organ transplant training for doctors from China in the State of New South Wales, and prohibiting Australians from traveling to China for organ transplantation.

Mr. Parker elaborated on the reasons and importance of legal reform. He said, “The bill currently being discussed among the medical fraternity is the draft Human Tissue Amendment (Trafficking in Human Organs) Bill, which is based partly on draft Canadian legislation, known as BILL C-500.

"It seeks to undertake a range of steps that the New South Wales Parliament can take:

-"First, increase the penalty for commercial trading in tissues or organs;

-"Secondly, create offenses for the use of human organs and tissues taken without consent;

-"Thirdly, create an aggravated offense where the removed, traded or trafficked organ is a vital organ, with increased penalties; and,

-"Finally, extend the law to offenses that occur outside New South Wales where the person engaging in this conduct is ordinarily a resident of New South Wales.

"It is clear that there are issues in New South Wales in terms of being able to make laws that cover people's activity internationally. It is important to note that, while it cannot prevent persons generally established and domiciled in another State, for example, or another country, it can introduce limitations by criminalizing such conduct, and it can achieve its goal of reducing the number of New South Wales residents willing to undertake this activity.”

"Forced Organ Harvesting Has Been Ongoing in China for Decades"

"There were reports from international advocates that forced organ harvesting has been ongoing in China for decades, particularly targeting vulnerable people such as prisoners and minority ethnic and religious groups.

"This means that people are able to visit countries where forced organ harvesting occurs in order to receive their transplant. It creates a shocking and unacceptable global trade in human organs, resulting in appalling and ongoing human rights abuses.”

He continued, “The United Nations Special Rapporteur on Torture, Dr. Manfred Nowak, found that the majority of inmates in China's forced labor camps were Falun Gong practitioners who also comprised two-thirds of the reported torture cases. His 2007 United Nations submission lists hospitals, transplant centers, detention centers and courts in China that have been involved in either the removal of organs from live Falun Gong practitioners or administering the use of these organs.”

Mr. Parker reminded everyone, “It is important to recognize that organ donation is a critical part of ensuring the health and wellbeing of the people of this State. We need to improve ethical ways of delivering healthy organs to people in New South Wales. But we know, as the petition has put forward, that that is not the case in China. We should be doing everything we can to try to ensure that this situation is eradicated permanently.

"I note that China's Deputy Minister of Health stated that inmates are not a proper source for human organs. We need to do what we can to ensure that that is carried through.

"This discussion is important. It is on the parliamentary record, Hansard, where it will stay.

"It is also important that this matter is brought to the attention of the Government and other members because of the suffering―the suffering of those brave [Falun Gong] practitioners, Christians, and minority ethnic groups and others in China who are subject to torture and persecution.

"The illegal harvesting of their organs must stop. We must do everything we can in New South Wales to ensure that we do not take part in that activity and ensure that we protect civil and human rights around the world.”

"One way of addressing this brutal trade is for countries such as Australia to impose a prohibition on its citizens and residents from receiving trafficked organs wherever this transplant occurs.

"The Greens are currently considering law reform to create specific offenses of receiving harvested or trafficked organs within New South Wales or overseas. This law reform would highlight the injustice of the global trade while reducing the likelihood of Australians overseas participating in it.

"We hope that such a prohibition would also serve to emphasize the need to improve organ donation rates in New South Wales.

"We have consulted broadly with the public, members of the medical community and other stakeholders in relation to this matter. It is important to recognize that the New South Wales Government cannot do everything.”

After Mr. Parker's speech, Mr. David Elliott, Member for Baulkham Hills, responded to the petition for the Government and said: “It would be remiss of us as a legislative body promoting our place on the world stage to ignore this petition.

"I therefore appeal to the House to acknowledge this petition as an important matter for our ongoing dialogue with the Chinese Government.”

After the parliamentary debate on the issue, a press conference was held in the Parliament building. Mr. David Shoebridge, MLC, Member of the the Greens, and Mr. Parker spoke about the discussion in Parliament and explained the reasons for legal reform to stop live organ harvesting and illegal organ trafficking.

MP Relates the Violence He Witnessed on Tiananmen Square

Mr. Parker narrated what he and his family witnessed on Tiananmen Square years ago, describing how Chinese police violently arrested Falun Gong practitioners in public.

This was the first time he had heard about Falun Gong. He said that before he was an MP, he and his mother went to China to visit his sister who was learning Chinese in Beijing.

While walking on Tiananmen Square, they heard a commotion and saw police taking away people who were holding up banners that read “Falun Dafa is good.” While the police took away several people to one side, some people on the other side unfurled Falun Gong banners, one after another.

Mr. Parker's mother saw a policeman fiercely punch an elderly woman in the face just because she held a banner. His mother was shocked and wished to step forward to help the elderly woman.

In public and in full view of a crowd bystanders, the police exerted such violence against an elderly woman. Mr. Parker pointed out that, considering this, one can imagine what happens in prisons.

Mr. Parker reiterated the importance of NSW legal reform, which is important not just for Falun Gong practitioners, but also those safeguarding justice and human rights.

Mr. Shoebridge praised everyone’s efforts to help stop the atrocities. He said more and more MPs know the truth about Falun Gong and support it. He indicated that he and his colleagues would work together to improve human rights and stop live human organ harvesting and the illegal organ market. These efforts will ensure a better and more just society.

The proposal would forbid NSW citizens and residents from receiving organ transplants from any country or channel that has harvested the organs from a living human. Anyone in NSW taking organs illegally or via unethical means would face legal consequences.

Once the bill is passed, it will become an amendment to criminal law.

The bill considers illegal organ trafficking as a form of manslaughter. Once found guilty, one could be sentenced to imprisonment of over 25 years.

Mr. Shoebridge explained that anyone with suggestions or comments could submit them to his office via the NSW Parliament website.

The bill has drawn considerable support from all circles and has made a big impact.