(Minghui.org) Today's news from China includes incidents of persecution that took place in 9 cities or counties in 5 provinces. In this report, 11 practitioners were subjected to mistreatment during their detention and at least 5 practitioners were illegally arrested. 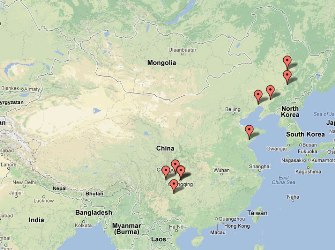 A preliminary trial was held on March 12, 2013 at the Bijie Court. Ms. Chen stated to the judge that it was legal to practice Falun Gong. Another trial was scheduled for late March.

Ms. Zhou Chengqiong, in her sixties, is a practitioner from Shapingba District in Chongqing. When she distributed truth-clarification flyers on the morning of January 24, 2013, the police arrested her and took her to the Tiaodeng Police Station.

The police ransacked her home in the afternoon and confiscated Falun Gong books as well as informational materials. The police took her to the Shapingba District Detention Center and kept her there for 15 days.

The authorities violated Ms. Zhou’s rights and did not allow her family to visit her while she was being detained; nor did they allow her family to send her a blanket or other necessary items. In addition, the police extorted more than 6,000 yuan from the family.

Ms. Li Xiaolan is a practitioner from Xiaxiao Village in Luyang Town of Jinzhou City. Officers from the Luyang Police Station arrested her on the afternoon of March 18, 2013, and confiscated her personal belongings.

Zhucheng City practitioner Ms. Xia Hongqin was riding her bike when officers from the Xinghualu Police Station arrested her and detained her at the Zhucheng Security Center. They confiscated the following items from her handbag: a copy of Hong Yin, five pieces of Falun Gong informational materials, a cell phone, and an MP4 player.

The police attempted to take Ms. Xia for a physical examination at a hospital, prior to sending her to a forced labor camp. However, her family stopped them. Ms. Xia was subsequently released and returned home.

Ms. Zhang Yuanqing and Ms. Yuan Guangfen are both practitioners from Shapingba District in Chongqing. Police arrested them when they distributed Shen Yun DVDs on the morning of March 19, 2013.

When Suining City practitioner Ms. Chen Rong talked to people about Falun Gong on March 17, officers from the Guanyin Police Station arrested her and took her to the Suining Detention Center.

Mr. Li Liguo was incarcerated in a solitary confinement cell in mid-March at Division 3 of Daqing Prison.

Person directly responsible for this:

The Intermediate Court in Leshan City held a trial for four practitioners on March 5, 2013. Among them, Ms. Tan Junying was sentenced to four-and-a-half years, Ms. Wu Junhua to three years and 10 months, Ms. Wan Jinzhi and Ms. Liao Mengqiong received three years each.